Inspired by the book One Big Happy Family , written by Lisa Rogak. Animals come in all shapes, sizes, and smells and these rwawwwesome pups are saving them all!

7. The Aussie Rex and His Joey

One morning, Rex the 10-year-old Pointer from Australia was on a walk with his human, Allen. They had the unlucky fate of seeing a kangaroo car accident on the side of the road. Rex wandered off in a hurry, he quickly ran back to Allen with something in his mouth?! Rex found the cuddly baby joey, who had just lost his mother. Rex and the joey kissed endlessly until he was sent safely to a nearby Wildlife Sanctuary. Rex to the Rescue! 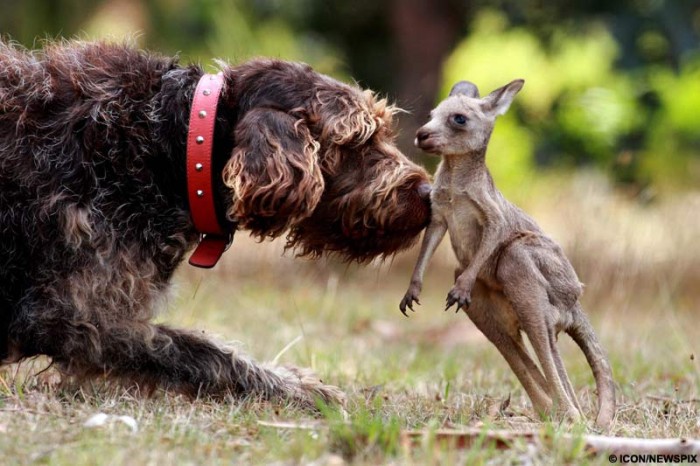 6. Lisha the Labrador and Her Baby Hippopotamus

Having a tough start as a pup herself, Lisha, the South African Labrador was rescued and nurtured back to health by her loving parents, Nadine and Rob. Today,  Lisha helps raise abandoned and orphaned animals. This baby hippo was particularly lickable to Lisha. She teaches orphans how to be real life wild animals! 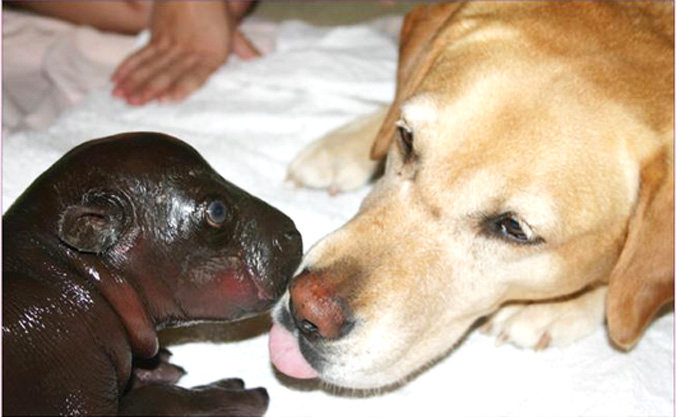 It was love at first sight between Susie the Boxer and Tabitha the piglet. Susie’s puppy mom, Wendy Valentine, saved little Tabitha as she fell off a pig farm truck. Either born on the truck itself or just hours before, little Tabitha joined Susie Valentine’s family as just a wee little baby. Susie could not stay away from little Tabitha and treated her as her very own sister. Being inseparable fwwends, they continue to play and grow old together. 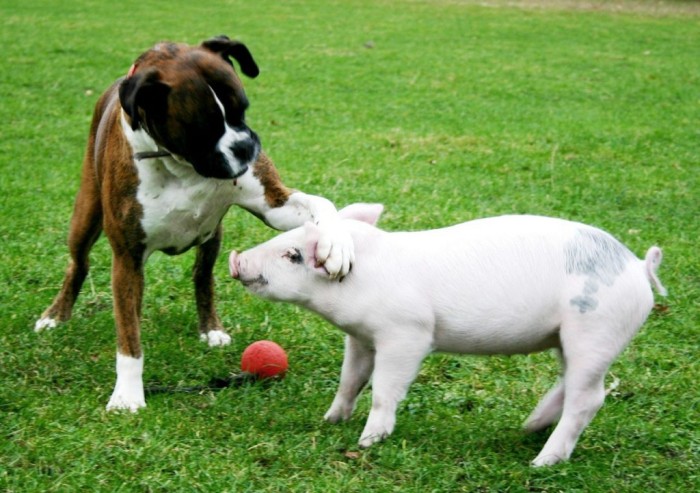 4. Mac and His Pot Belly Quadruplets

Working at the Blue Cross hospital in Northiam, Liz Grant has her hands full with cuddly patients. One day 4 little piggies arrived in her office, the mother had rejected them for an unknown reason. Good thing Mac, the Border Collie, came to the rescue! With lots of licking and cuddling these piggies found a new accepting momma in Mac. 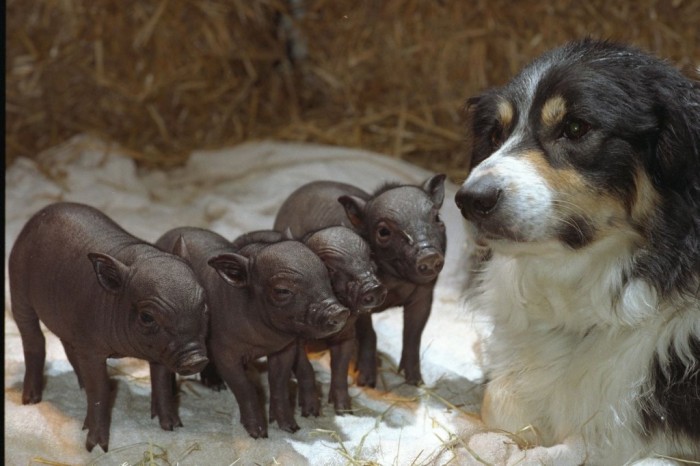 3. The Billy Goat Gruff and the Wolf Kid

After a newly born wolf pup was found in a forest, outside a small Chinese village, the most unlikely friendship was born. This orphaned wolf pup was discovered resting near her deceased mother. The villagers quickly looked for the nearest milk source for him and Chen Ming’s goat had just given birth to a baby billy goat. The wolf pup grew up with the baby goat, sharing a mother’s milk and childhood friendship. You don’t wanna mess with this wolf pack! 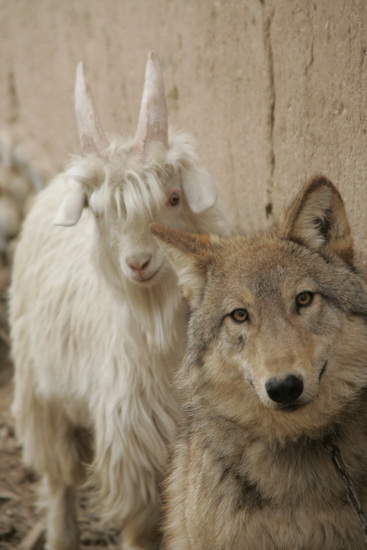 2. Kiera and Her Baby Owlet

Kiera the dough-eyed German Pointer made an adorable friendship with baby owl, Cherub. When Kiera’s mom brought Cherub home, Kiera’s motherly instincts went into full effect. On the days Kiera’s owner and Cherub leave home to do school demonstrations, Kiera does not rest easy until they make it safely back to her. This owlet may be adorable, but you’ll have to get past her dog mom first! 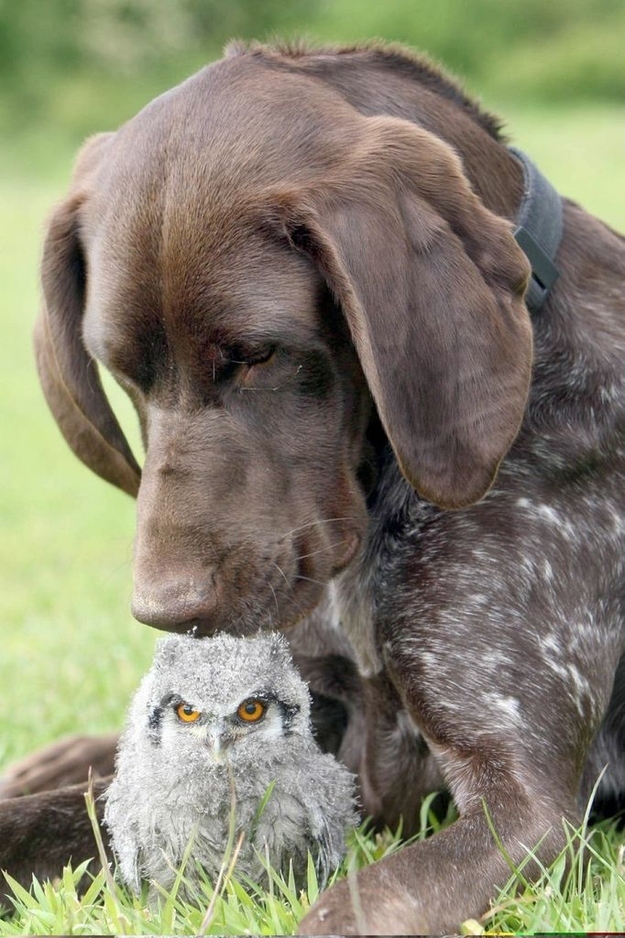 1. Sunshade, an Airedale Terrier and her piggies

Sunshade would watch guniea pigs in the window of her local pet shop for hours. She was obsessed with them. In 2010 when Sunshade was diagnosed with cancer and successfully treated, her mom bought her what she had always dreamed of. Sunshade got her very own Guinea pigs! She treats them as her own puppies, cleans them, protects them, and cuddles them. Sunshade is inseparable with her new guinea pig family. 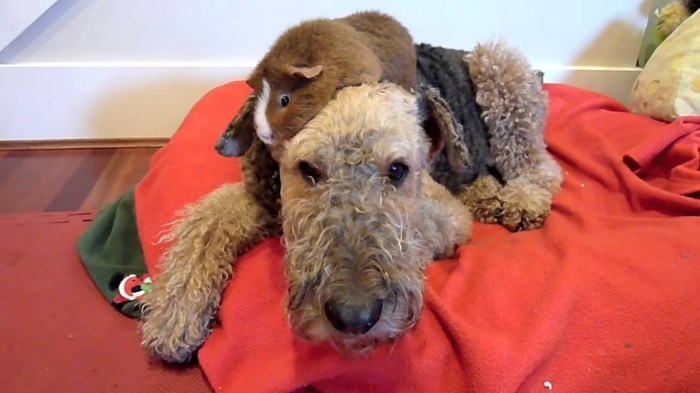