Lucy, a Pit Bull, has been with Rodrick Gibbons since she was a puppy. He calls her his little girl. He was as devoted to her as she was to him.

This week, Lucy gave her life in honor of that devotion. Walter Williams entered the family’s apartment wielding a knife and threatened to kill Lisa Potts, Rodrick’s mother. Walter is Lisa’s ex-boyfriend. When Walter struck Lisa across the face, one of her sons stepped in to defend his mother. Walter retaliated by stabbing the man in the arm. It was then that Lucy went on the defense and saved her family from Walter. She lunged at him, but the man stabbed her three times. One of those wounds was in the dog’s neck.

Lucy’s actions disarmed Walter enough that Lisa’s sons were able to restrain him until help arrived. First responders immediately tried to save the brave dog’s life. 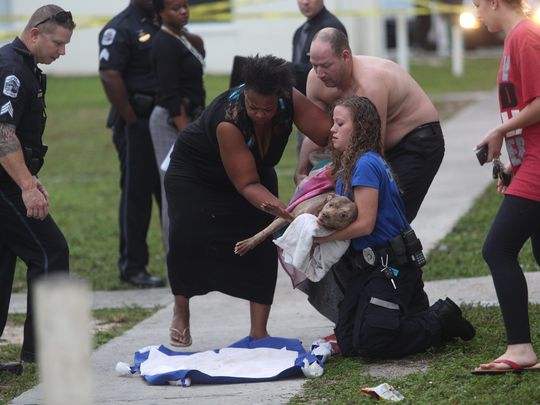 Tragically, Lucy succumbed to her injuries and died the following day. Her family believes that her sacrifice saved at least one of their lives. There is no doubt in their mind that Walter would have killed one of them had it not been for Lucy.

Lucy may be gone, but she will never leave her family’s heart. Rodrick says:

I’ll remember her. She did her job. She did what she was supposed to do, and I am going to make sure that she leaves her name on this earth.

The family has started a GoFundMe page to help offset the costs for the pup’s burial.