On December 29, 2015, Louisville Metro Animal Services (LMAS) received a phone call about an American Pit Bull Terrier who had been shot and was loose on East Burnett Street. Unfortunately, Animal Control Officers were familiar with this area as that particular zip code has been experiencing random shootings of dogs both in yards and loose since October 2015 for which authorities have not yet found any suspects. When Animal Control Officers brought this injured dog back to LMAS, he was transported to a local animal hospital, where it was advised that euthanasia was the most humane option at that point. LMAS does not have the in-house capability or funding to provide extensive and expensive surgeries such as amputation, which was the surgery that this dog would have needed.

However, Brenda Keel, LMAS’s Veterinary Technician Manager, disagreed with the hospital’s recommendation of euthanasia. She instructed that the dog be put on strong pain medication and that his leg be bandaged.

This was only a temporary fix as a dog’s liver cannot sustain strong pain medication over a long period of time; surgery was needed for this dog to be able to live a normal and pain-free life. In order to save his life, a rescue would need to be found that could pull this dog from LMAS. Enter Leslie Hawk, LMAS’s Public Information Officer, who first heard the story of this dog on January 4th. Leslie contacted The Arrow Fund, a “Kentuckiana-based 501 (c)(3) nonprofit organization that provides medical treatment to animals who have been victims of extreme torture, abuse, or neglect,” but was told they did not have any foster homes available to take this wounded animal.

Leslie then met this dog on January 5th and despite being on strong pain medication and still having a bullet lodged in his leg, his tail immediately began to thump. Not only did the name “Yankee” immediately pop into her head but it was then that she knew she had a solution to Yankee being able to be pulled by The Arrow Fund. Leslie would become Yankee’s foster mom, effectively saving him from euthanasia.

After Leslie was approved as a foster home by The Arrow Fund, they were able to pull Yankee from LMAS and transport him to BluePearl, a vet clinic that provides specialty and emergency veterinary care. While at Blue Pearl, it was confirmed that it wasn’t possible to save Yankee’s leg and amputation was needed. The day after Yankee’s operation, Leslie went to BluePearl to visit her newest foster. The staff at BluePearl cautioned Leslie that Yankee may yelp in pain if he moved, but he didn’t. As soon as he saw her, he stood up and began wagging his tail, which seemed to be part of the continuing trend of Yankee defying odds. 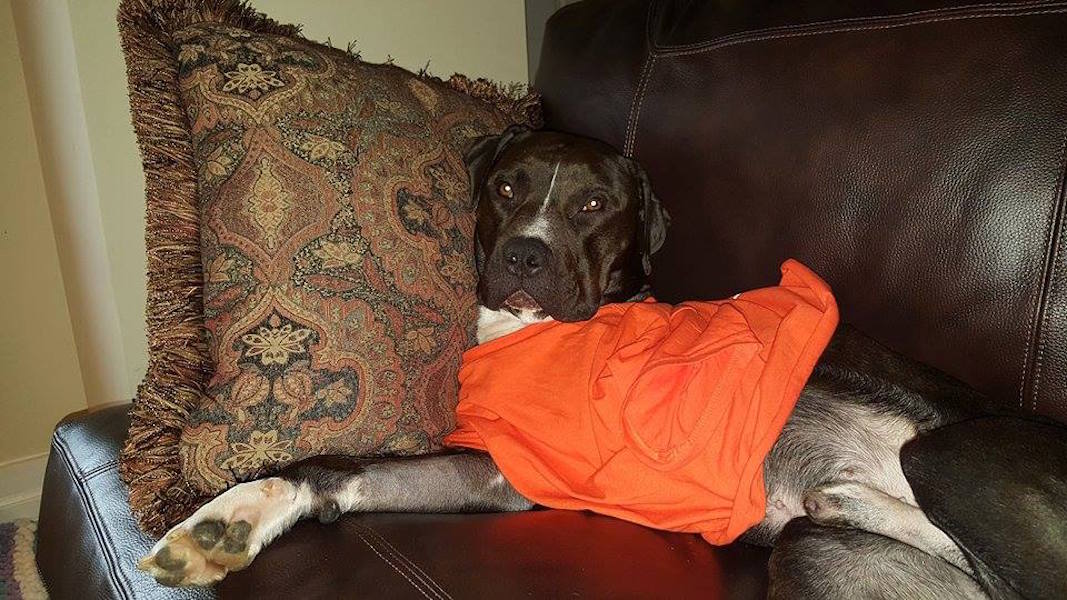 A few days later, Leslie welcomed Yankee into her home and began to acclimate him to his new surroundings and new foster siblings, Peanut, an American Staffordshire Terrier, and Gordy, an American Pit Bull Terrier (was also a gun shot victim). Unlike Yankee, Gordy’s gun shot was not extensive and LMAS had the capabilities to remove the bullet in Gordy’s face. Gordy was, however, at risk for euthanasia due to time and space before Leslie decided to foster (and eventually adopt) him through LMAS. Through meeting Leslie’s nieces as well as BluePearl staff’s comments about Yankee’s calm and comforting demeanor, Leslie began to think that perhaps Yankee was meant for something larger. Not only had he survived being shot, but he had also escaped euthanasia. Now Leslie wanted to ensure that Yankee’s story would serve to inspire others. Leslie decided to take on the task of working to have Yankee become a certified therapy dog. Leslie is currently at the beginning stages of working with WAGS Pet Therapy of Kentucky, Inc., whose mission is to “bring people and pets together for companionship and therapy.” Leslie has been fostering Yankee for approximately two months, and every day begins to see a little more of his personality. It has, however, been apparent from the beginning that Yankee is incredibly drawn to people.

Leslie believes that within a year, Yankee will become a certified therapy dog. Once certified, Yankee will be able to travel anywhere that accepts him as a therapy dog, although Leslie would like to focus on him visiting veterans and children who have also had limbs amputated.

“I think seeing them share a common bond and inspire one another would be great. But most important[,] I think Yankee and his character and confidence would really inspire others who have lost legs and arms as well. [T]o see them gain confidence from him would just fill my soul.” Leslie is quick to emphasize how vital fostering is in the animal rescue world.

“I don’t joke and don’t mean this flippantly when I say, ‘Fostering saves lives.’ And here’s what I mean: without a foster, Yankee would not be here today. He would be dead…. Shelters are at their breaking point, rescues are at their breaking point. [W]hen a foster steps in and says, ‘I can temporarily care for this animal until a home is found,’ yes, the rescues and shelters still pay for everything…but the animal is still alive.” By fostering, you are able to help prepare the dog for their future adoptive family. Leslie told BarkPost:

“The animal gets used to being in a home,…prepared for his new home and space is opened at the shelter or rescue for another animal. [Space is] opened in a positive way. If Yankee had been euthanized, yes, the space would’ve been opened but instead of saving just one life, now we’ve saved two because Yankee is still here…. All you provide is love and socialization for the animal. You get so much more in return. I just really like to say it saves a life. It really does.” Something that is commonly heard from people giving a reason as to why they don’t foster animals is that they couldn’t bear with parting with the animal. As a previous and current foster mom to both dogs and cats who have gone on to other adoptive homes as well as adopting one of her former foster dogs, Leslie told BarkPost:

“People always say, ‘I can’t foster. I would keep them all.’ And I’m not going to lie, that happens. I have Gordy [who I saved] a day before his euthanasia…. You know your limits. You know what you can and can’t do. You know if you can’t have a dog full-time then you’ll work really hard to find that dog a home because it’s personal now for you. [Then y]ou meet that family and just know it’s the right one and better than your home…. [T]his dog that you just prepared for life, you get to give them to their family.”

If you’re looking to foster but are concerned that you don’t have the time to commit to a foster dog long-term or would rather just dip your toe into the fostering pool, fostering can also be done on a day, weekend, or short-term basis. Leslie explained to BarkPost:

“There’s really no set rule, you just need to be an approved foster. If you only have two hours and want to go for a walk in the park and get ice cream, then you can do that. Or if you need a running partner and just can’t get out [to exercise] without someone else, a dog is a great running partner.”

If you’re in the Louisville area and are interested in fostering, in any capacity, for LMAS, you can click here to fill out a foster application and either email it to Amanda Wolfe at [email protected], fax it to (502) 473-2634 or bring the completed application into LMAS’s Animal House located at 3516 Newburg Rd.

If you’re not in the Louisville area and are interested in becoming a foster parent, you can contact your local shelter, humane society or rescues and ask for more information. Once Yankee is considered “medically cleared,” he will be available for adoption through The Arrow Fund.

Yankee’s amputation as well as his ongoing medical care has all been covered by The Arrow Fund, who subsists through donations. If you would like to donate to Yankee or any other animal’s medical bill who has been rescued by The Arrow Fund, you may do so by clicking here.

Featured image via Levity Tomkinson/Give Me All The Dogs Photography