Volunteers for All Dogs Official Rescue Enterprise of Houston (ADORE) unfortunately see instances of abuse on a regular basis. But volunteer Brittany Faske wasn’t ready for what she found when she received a call about an injured Pit Bull spotted in a construction dump site. “This once gorgeous, large dog had been reduced to almost nothing,” Faske told The Dodo.

His bones were visible through his skin, and he was sitting among old trash and discarded tires. But the worst part was the gruesome injury on his face. The dog was missing most of his nose and mouth, with bits of his snout hanging off. As she got closer to the terrified dog, Faske could tell that the injury had gotten infected by the smell it gave off.

*Some of the following images may be disturbing to some readers, especially tiny humans.* His body was slumped in a pose of utter helplessness, but that didn’t stop him from growling when he felt Faske get too close. Afraid he might not make it, Faske hoped she could at least give him a dignified ending. As she got close enough to see the injury clearly, Faske could see it seemed like a clean cut, as if done by a sharp object.

“It was as if someone had literally taken a knife and cut off the front of his face.”

Sitting in Faske’s car, Apollo (named after the god of healing in ancient Greek and Roman mythology) relaxed and snoozed, surprising the human who would turn out to be the best thing that ever happened to him. “It was as if he knew he was safe,” said Faske. At the vet, Faske and everyone who saw this poor dog were surprised to see him curiously sniffing other dogs and walking around as if half his face wasn’t missing. On top of the horrific injuries, Apollo tested positive for heartworm, making any hope of recovery very slim. But Apollo had other plans.

When bowls of food and water were placed in front of him, Apollo devoured everything, giving Faske and the veterinarian hope that he would pull through despite his odds. “From that moment on, we knew he wasn’t just another dog,” she said. Apollo underwent constructive surgery to help salvage what was left of his snout. After a skin graft and the removal of his upper jaw and some teeth, Apollo had no nose, but he could still breathe through his nasal cavity. Despite losing most of his face, his goofy personality remained intact. Faske fostered Apollo while he healed, but after seeing him win the love of her two grumpy senior dogs, she knew it was a match made in doggie heaven. 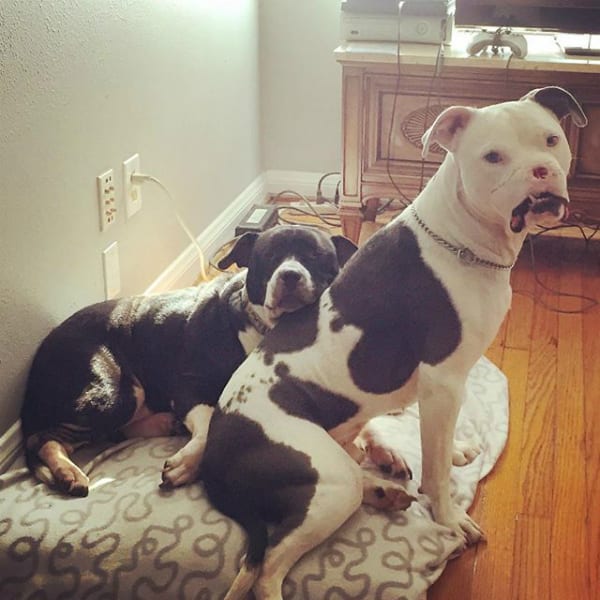 Apollo now spends his time eating and sunbathing, playing with tennis balls, and snoozing with his big bros at Faskes’s home. 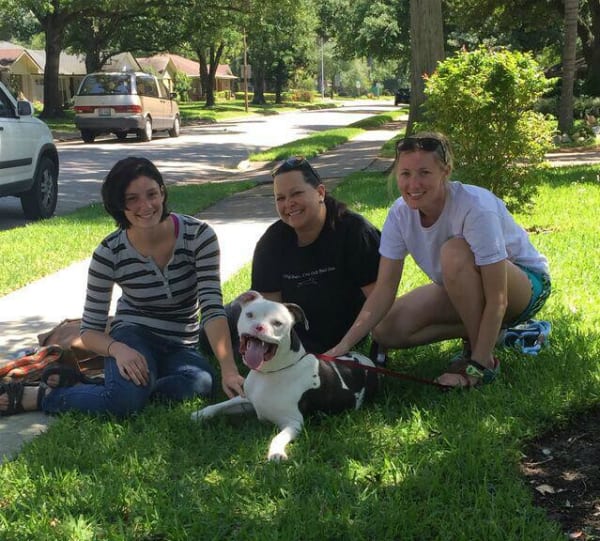 He even loves joining in on his human’s home workouts:

In addition to the love of his human and doggie family, Apollo attends a training class every Saturday that has helped him regain his confidence and blossom into the happiest dog you’ve ever seen. Faske says that the weekly classes are their bonding time. “He somehow knows when it’s Saturday because he’s waiting patiently for me by the door…And he can’t wait to go for a car ride.” Apollo is now ADORE’s official poster dog and mascot, helping champion the fight against animal abuse and increasing the public’s awareness of cruelty towards animals. Faske says that Apollo is “showing the world that an animal who has suffered so much, then been thrown away, can rise above the circumstances they may have been fated to, and become a champion for other animals.”

Apollo got the happiest ending anyone could hope for, but there are still other puppers who need help. To support ADORE’s rescue efforts in the Houston area by fostering or donating, visit their website. For pupdates about Apollo, check out ADORE’s Facebook page!