Home » Fun » UPDATE: Pit Bull Falls Instantly In Love With Man Who Rappelled Down A Mine Shaft To Save Her

UPDATE: Pit Bull Falls Instantly In Love With Man Who Rappelled Down A Mine Shaft To Save Her

After Michael Scheopf’s daring rescue of Corona the Pit Bull from the bottom of a deep mine shaft, people everywhere wondered why she was being put up for adoption when she had clearly fallen head-over-paws in love with her hero. Well, all that has changed, according to Scheopf. Despite less than ideal circumstances, he’s decided he wants to keep Corona by his side after all. He says:

So originally I was going to try to find a home for little mrs (sic) Corona, but who am I kidding after the death of a co worker and very good friend a few weeks ago, this dog has truly saved my life. I wouldn’t normally do this but if I want to keep her it has come to me finding another place to live. Which I definitely cannot afford right now, but I’m on a mission and will do what it takes to keep this pup by my side forever!

We’re so excited for this turn of events, Michael! And we know that Corona will never be happier than when she’s with you. You’re the reason she’s alive, after all.

If you’d like to help out, Scheopf has started a GoFundMe page for any kindhearted souls.

For Michael Scheopf and his buddy, happening across an old mine shaft on an off-roading trip was just the kind of adventure they were looking for. But when the boys shined a flashlight down into the tunnel, a head poked out and two eyes reflected back.

A one-year-old Pittie girl, now named Corona, somehow ended up alone and abandoned at the bottom, which reportedly contained many tarantulas (I KNOW). Scheopf immediately established a connection with the trapped pup, and they wasted no time gathering volunteers and rope to lift her out.

There was no way we were going to turn our backs and let her die. The rescue was risky, and Scheopf told The Press Enterprise that even one wrong rub of the thin rope against the rock would have turned the mission into a rescue for two. Luckily, the poor girl didn’t hesitate to climb onto him when he made it to the bottom:

They lowered me down the shaft and then I put Corona here on my shoulders. When I got there, she held on for dear life and we climbed back up. 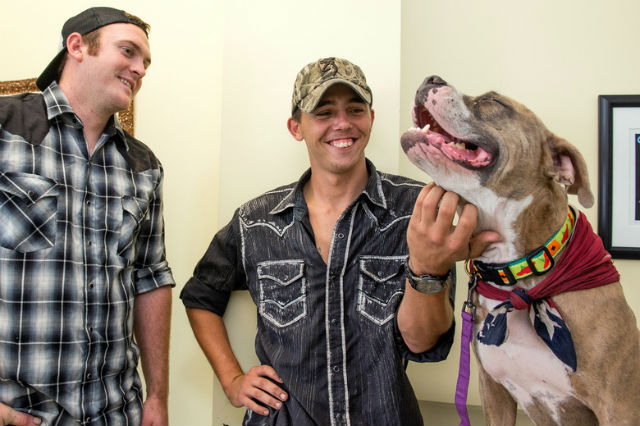 Corona spent the night at Scheopf’s home, sleeping beside him, and he brought her to a local animal hospital who treated her free of charge. She escaped with only an eye injury and a few scratches. Corona’s microchip has no recorded information, and so she will be put up for adoption if her previous owners cannot be found. “She’s wonderful, she’s an amazing, amazing dog,” says Scheopf. “So obedient.” Well, sir, perhaps you are exactly the person she’s ready to call family. We thank you for doing the right thing and for saving such a great dog!