“Clark Kent has no idea that he looks a little different from other dogs,” says Kylie Edmond, who met the wiggly, petite fellow just before Christmas at the Manhattan Animal Care Center, where he had been surrendered by his beloved family. Clark had facial bone masses and at the time was suffering from Kennel Cough, but the only thing he cared about was wagging his tail and giving kisses. That day, Edmond vowed to protect the little Pit Bull, and when he was put on the euthanasia list, she saved his life.

In his short ten months on earth, Clark Kent has faced death twice – and won. When Edmond – who is the Co-Founder of Rock & Rawhide, an amazing non-profit that delivers toys and other goodies to shelter animals in need – brought him to the Animal Medical Center of NYC, she learned to her dismay that Clark had double pneumonia. Over the next week, Clark was in critical condition. Even though he struggled to breathe, his tail still wagged back and forth as nurses tended to his kennel. He lived for that time in solitary, and friendly faces were always met with gentle kisses, no matter how sick the puppy was feeling. Edmond, for her part, has watched him grow healthier and stronger. With each passing day, Clark becomes even more devoted and cuddly. He is very attached to those who show him kindness, and his life is all about being close to those he loves most. In the car, he likes to plop his head into Edmond’s lap and sit there quietly. Now, Clark Kent is almost recovered, and he needs our help. He’s looking for a foster or forever home near his vet in Manhattan. His current foster family is too far away for him to continue his regular visits to the vet, where he will be neutered and his bone masses will be diagnosed and treated following his full recovery. All transportation to the clinic will be provided by volunteers. He just needs a loving place to stay. With his current foster family, Clark has a three-year-old girl on whom he dotes. His love for children, suggests Edmond, should once and for all dispel the negative and untrue stereotypes about Pit Bulls. This little gray gentlemen is as soft and warm-hearted as they come. Despite the trauma of his past, his hopefulness is contagious. Edmond suspects Clark Kent’s former family gave him up because of his bone masses, but to her, his face is part of what makes him a once-in-a-lifetime kind of dog. When he has a forever family of his own, she can see Clark potentially being a therapy dog for children with abnormal features. More than anything, this sweet guy has taught her that what’s inside counts far more than what others might judge from the outside; Pit Bulls like Clark deserve a chance to show the world just how sweet and tender-hearted they really are. 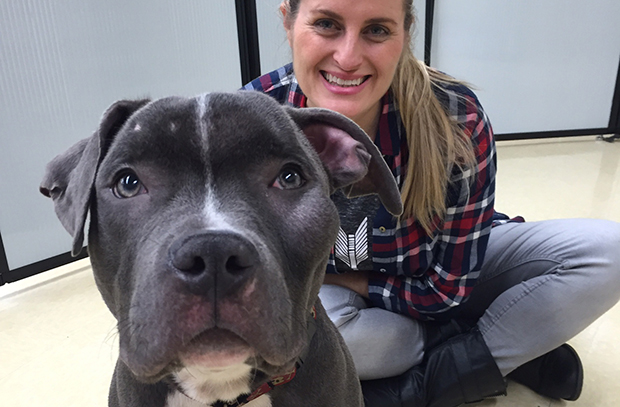 Clark is good with other dogs. If you think you might be his person, either forever or for foster, please contact [email protected] Clark Kent was saved by Rock & Rawhide and Pathway to Hope Rescue, both of which accept donations online. Find out more about Clark at Foster Dogs NYC.