Why Pit Bulls Face An Uphill Battle As Service Dogs

September is National Service Dog Month, and boy are we pumped about giving these pups the high paws they deserve! Each and every one gets our thanks for the amazing work they do; whether they aid their humans with mental illnesses, blindness, or physical disabilities, service dogs instill confidence in those who need them and plain ol’ inspire just about everyone else. Way to go, pups. May you receive extra special belly rubs this month!

When a motorcycle accident robbed him of his mobility 20 years ago, Matthew Smith was forced to leave his home everyday in a wheelchair. It destroyed his self-image, and anxiety plagued him for a long time as a result of the discomfort he experienced in public places.

Up until two years ago, there wasn’t much he could do about it.

Enter Jericho, Smith’s service dog, who helps his human get around and manage everyday tasks. He does exactly what a mobility service dog is trained to do and more, despite his being a bit untraditional in his profession.

Jericho is a graduate from the Animal Farm Foundation in New York, an organization dedicated to securing “equal treatment and opportunity for ‘pit bull’ dogs,” and is a full-fledged, certified service dog. 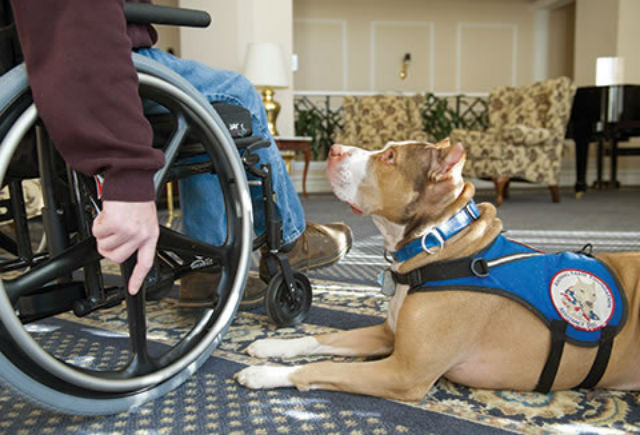 The exceptionally unique thing about the Animal Farm organization is that they only pull potential trainees from shelters, and only if they’re described as Pit Bulls or Pit Bull mixes. They choose dogs based on temperament, desire to work, and tolerance of basic care routines, like nail trims and teeth and ear cleanings, and only consider those who are “physically sound with good bone structure.” Expert trainers diligently train the dogs to meet the requirements of the American Disabilities Act (ADA), which gives them every freedom offered to the Golden Retrievers, Labradors, and German Shepherds we often see as service dogs.

You may have heard of Harry Browne, a marine veteran with a year left to live due to pancreatic cancer, and his PTSD service dog, Olivia. After losing his dog and reuniting once again with the help of local shelters, the two plan to visit their friends and family around the country before he says goodbye. Though Olivia is a Pit Bull, we can only hope Browne finds it easy to travel through those states with legislation prohibiting Pit Bull-types. Unfortunately, breed ban laws and misinformation are partly to blame for the prevailing stigma. The bans create hurdles that keep these working dogs from doing their jobs in locations that need them, and incite misplaced suspicion of the breed. Ineffective laws are costly, very difficult to enforce, both over and under-inclusive regarding those who are penalized, and discourage responsible pet ownership. It’s no surprise that breed bans characterize every single one of these points.

So why are so many people opposed to the idea of Pit Bulls doing good as service dogs, especially when they are trapped within the assumption that Pit Bull-type dogs (remember, the term envelops several different breeds) are inherently aggressive and unpredictable? 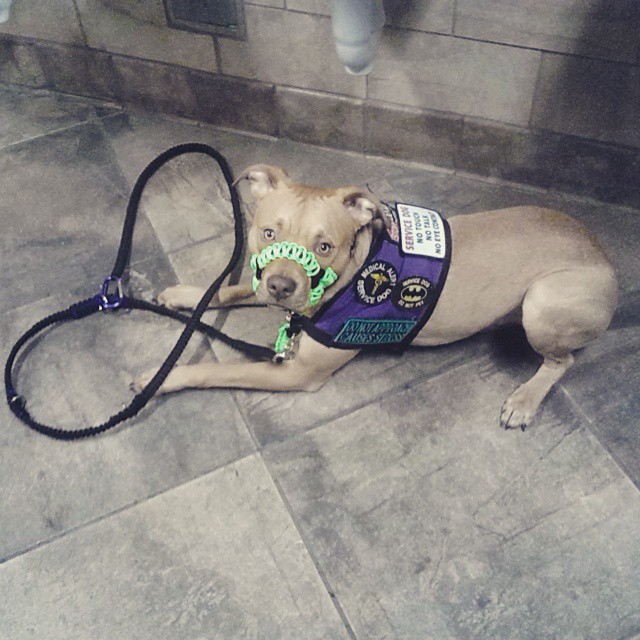 Matthew and Jericho certainly have something to say about it. As do Pup-Cake the service dog and her 7-year-old handler, and so many other Pittie service dog pairs. In fact, a Santa at the mall refused to see Pup-Cake’s little girl last Christmas because he saw her with the Pit. Even after the girl’s guardians offered to take Pup-Cake completely out of the mall, the man still declined. 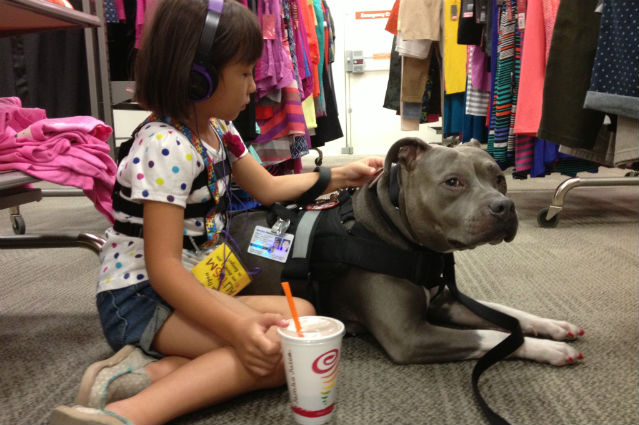 Discrimination of the breed extends to the people who love them, in this case, though those who judge often form opinions based on the idea that DNA trumps all. The ASPCAs’s position statement on Pit Bulls should really be considered:

While a dog’s genetics may predispose it to behave in certain ways, genetics do not exist in a vacuum. Rather, behavior develops through a complex interaction between environment and genetics. […] Because of the impact of experience, the pit bull specifically bred for generations to be aggressive may not fight with dogs and the Labrador retriever bred to be a service dog may be aggressive toward people. Every dog is an individual, and while Pits have a less than pleasant history, their appearance and reputation should never adversely affect their role as service dogs. The American Veterinary Medicine Association even reports that “controlled studies have not identified [Pit Bull-type dogs] as disproportionately dangerous.”

In addition, thousands of dogs of every breed and mix are tested each year by the American Temperance Test Society (ATTS) for skittishness, aggression, and how well they differentiate between threatening and non-threatening humans. 83% of more than 30,000 passed, with Pit Bulls reaching a whopping 86% success rate and passing with an above average temperament. They are “the second most tolerant breed tested by the ATTS,” followed only by Golden Retrievers.

It’s something to consider, and a good enough reason to keep an open mind about Pit Bulls and the amazing potential they have. So many people have already accepted the breed’s unmatched loyalty and dedication to their humans, and groups like Animal Farm have found the perfect way to let them show it. Matthew and Jericho and Pup-Cake and her human make the absolute perfect partners. If their own devotion has anything to say about it, the love these humans have for their dogs and the jobs they perform is most certainly breed-blind. With any luck, their presence in society will help others see the same.