8 months ago, we marked a huge stop on Poh’s tour of the USA, when he returned to his original shelter as the guest of honor. 3 months before that, we delighted in sharing some more of his exciting pit stops. It is with heavy hearts that we learn Poh passed away on February 12, 2016 after a valiant fight with kidney failure. Nearly 2,000 posts live on on his Instagram account, each one documenting a new adventure, a special moment, or a brilliant memory.

One of the things that #pohthedog never got to do is get his picture with mickey at @disney. With the help of @littlemishperfect and @pollyplannermax, we are gonna get that one last checkmark for #pohthedogsbigadventure. Thank you so much for helping us complete this last task! #makeawish #shareyourears

Poh’s best friend, chauffeur, and parent, Neil, shared one last photo before making the final decision. He told all 129 thousand people following their journey that it seemed as though Poh waited until “everything [was] as it should be” before letting him know it was time. The pup’s family was together, they were back on the road… not one hair was out of place. Neil writes:

Some might roll their eyes at this notion, some will call us silly and naive… I prefer the term romantic, and ain’t nothing wrong with living life like that once I [sic] a while.

In Neil’s eyes, he had a whole extra year to love on his best boy, and Poh’s patience was just another gesture of love right back. A massive outpouring of supportive comments adorn the post, and while Neil may not have the time to respond to them all, he ensures everyone that he “feel[s] the love.” And “Thank you,” he writes, “for treating #pohthedogsbigadventure as your own. #rippohthedog”

H/t and Featured Image via @pohthedogsbigadventure/Instagram

A few months ago, Poh the Lab–Pit mix made an appearance on BarkPost with his bucket list journey across the nation. Pup parent Neil discovered that Poh had developed inoperable tumors in his abdomen, and so the race was on for him to see as much of the world as he could. At 16 years old, Poh is no spring chicken, but he’s certainly got the spirit of a pup at heart!

This adorable mutt has lived in New York for more than 15 years, ever since the day his parents brought him home from North Shore Animal League America at 8 weeks old. Together, we experienced Poh’s epic adventure with his mom and dad to places like Graceland in Memphis, Tennessee, Las Vegas, and even Coney Island. Well, even North Shore is keeping up with Poh’s story. The rescue invited him to return to his roots—that is, they had the white-muzzled pup kick off their 21st Pet Adoptathon this past weekend. 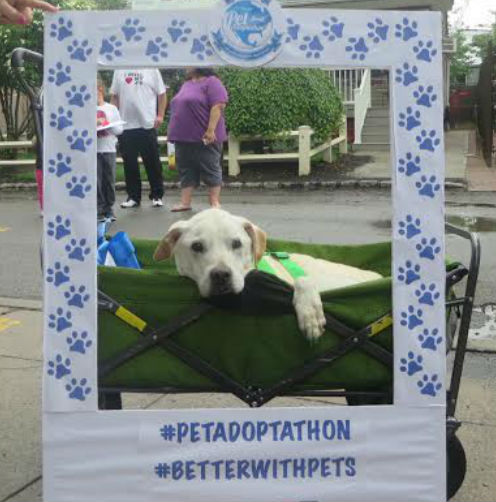 The event was 36 hours of adoptions and fun, complete with great food, music, and entertainment! As a special thank you to Poh and his family, the pup was presented with his “Mutt-i-gree” Rescue Registry papers and a Certificate of Appreciation for showing how puggin’ cool it is to adopt a dog. And check out the crowd that came out to meet the rescues and enjoy the festivities! On returning for the event, Neil said:

For me, having Poh go back to the North Shore Animal League was an amazing stop on his journey, completing the circle so to speak.

I’m sure Poh would agree! This pup has seen more of the planet than most dogs can throw a stick at, and his parents couldn’t be more proud of how far he’s come. “I guess it felt like watching your child graduate,” says Neil. “I felt like Poh accomplished something amazing and was getting recognition for it.”

North Shore even let Poh do the official ribbon cutting. (Shhh, he doesn’t notice his lack of opposable thumbs). You wouldn’t believe it unless you saw it with your own eyes, but after we cut the ribbon, Poh had a smile on his face. I think he could feel the love and appreciation, I know for sure that I did.

Don’t forget to take a look through Poh’s big adventures on his Instagram!