On Christmas day in 2014, vultures surrounded eight month old Pit Bull Lilo. They stayed with her for five days until Guilford County Animal Control in Greensboro, NC took her in. It’s likely that Lilo lived most of her short life chained to a tree with only a small crate for shelter.

The photo of Lilo surrounded by vultures is almost too painful to look at – you know the vultures were simply waiting for the right time to eat her. It’s a horrific thought. But that never happened. The photo of Lilo, taken by Greensboro News and Record photographer Rob Brown, set off a chain reaction that changed Lilo’s life forever.

Two weeks after she arrived at the local animal control, the Merit Pit Bull Foundation pulled her from the shelter and later she found a forever home with Keana Lynch and her boyfriend Travis Henley.

Her first bath was not fun. 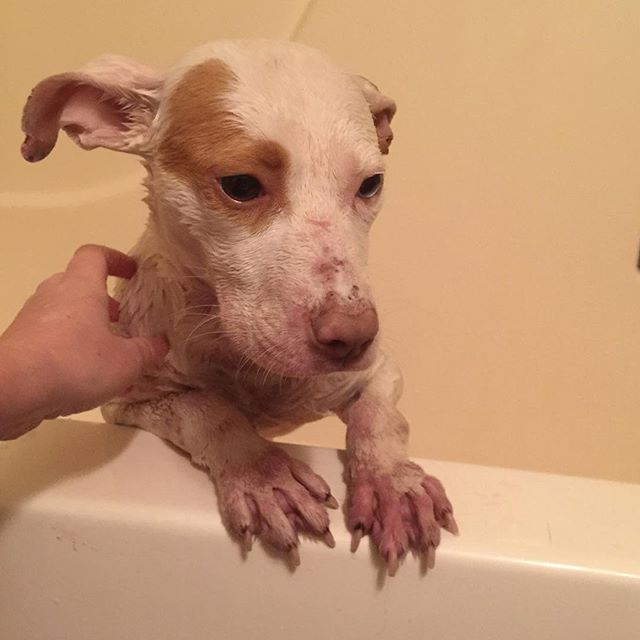 But snuggles from her new daddy were definitely fun. In fact, despite never knowing human kindness for the first eight months of her life, Lilo was a huge cuddlemonster from the very start. The sweet girl’s health condition was poor, but not as dire as one would expect. She was underweight and had some skin infections, but with love and care, she blossomed into a healthy pup. It did take time for her to learn how to live the life of a dog who was loved and safe. Keana told us:

She had no clue what to do in the house. She was not house-trained and she didn’t really know what to do with toys.

But she’s a smart girl and she figured out the toy thing after awhile. As far as her emotional recovery, well, Lilo never needed time for that. Her human said:

She has never held a grudge for her past and loves everyone she meets. She prefers to be held like a baby and snuggled with any chance she can get. Over the past year Lilo has become a healthy vibrant girl with all kinds of funny behaviors.

Lilo’s spirit is an inspiration to us. I can’t imagine a human bouncing back from spending months on a chain without receiving any affection. She is the perfect example of the unbreakable canine soul. The only pawssible residual effect of her former life is that she hates being alone. But really, who could resist cuddling that doggie 24/7? And when her pawrents aren’t able to give her squeezes, she has her sister to keep her company. Lilo is sharing her loving and giving nature with dozens of local children. Working with the Merit Pit Bull Foundation, she’s become an ambassador for responsible pet ownership and rescue. By being a mush of a cuddlebug, she’s also busting Pit Bull stereotypes. Keana’s other pup Gemma is a therapy dog. Over the next year, Lilo will be doubling-down on her training to work on receiving her therapy dog certification.

For now, Lilo is enjoying living life as a style icon…