Brody has been receiving the best care possible from his friends at Ebenezer Animal Hospital, and so many wonderful things have been happening! Most importantly, he now has a loving family who was chosen from hundreds of adopters to take him home. His new favorite person? The family’s 10-year-old daughter.

Project Safe Pet posted the following to their Facebook page:

We did not anticipate adopting him out so quickly but, when 10 year old Kailey came to visit Brody the connection was instantaneous. […] Kailey lost her best friend Woodrow, a 15 year old lab about two months ago. Upon seeing the picture of Brody, Kailey cried. When she came in to see Brody, the bond was immediate. Kailey told her mother that Brody had “Woodrow in his eyes”. 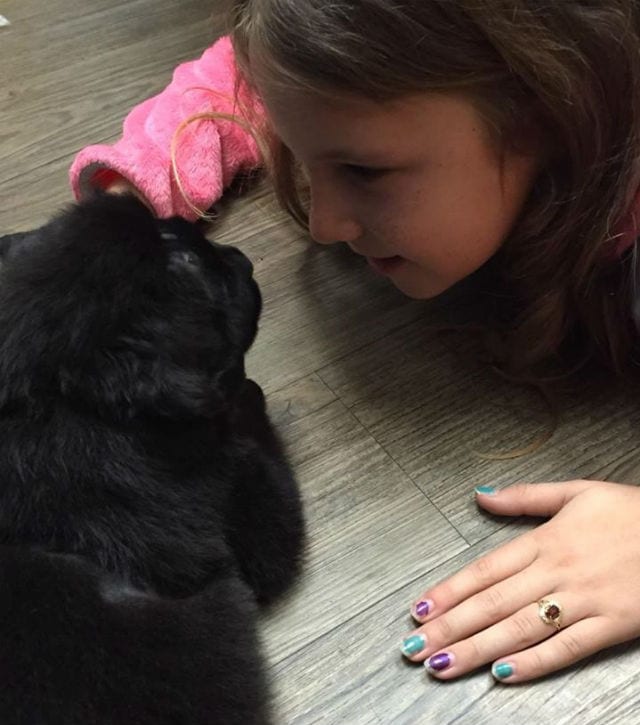 Because Brody is unable to undergo surgery, his care will continue to monitor the BB pellets still inside him. They don’t appear to be bothering him too much right now, though, and he’s always up for a quick play session.

Brody's forever family has been selected by the amazing Project Safe Pet, and we are excited to say that he will stay in…

The little guy even got the best surprise Wednesday afternoon when the very person who saved his life—the utility worker from the apartment complex—came to see him. They shared cuddles and kisses, and we bet Brody knew exactly what his savior had done for him. On the road to recovery, and with a family waiting to love him and more people than he will ever know hoping for #Justice4Brody, this pup is prepared for a great future.

Police have identified two teenagers involved in Brody’s case—the pair has been charged with shooting the puppy 18 times with a BB gun and throwing a knife at him. The eldest, a 17-year old male, may be convicted of a first degree felony cruelty to animals; a 14-year-old male is currently with his parents pending a court date.

Both teenagers could face “between 180 days and five years behind bars,” according to WBTV, as well as a $5,000 fine.

8-week-old Brody may have to live the rest of his life with 18 BBs lodged under his skin, but he has no reason to lose hope. When a utility worker at a Rock Hill, SC apartment complex returned to check on the puppy moments after spotting it with a group of kids, the little guy was bleeding from several wounds. An officer arrived on the scene to quickly and carefully transport Brody to Ebenezer Animal Hospital. Rock Hill resident Alicia Schwartz noted that despite the clinic’s limited hours, workers didn’t hesitate to try and save the puppy. Veterinarian Dr. Hreiz even drove back after hours to care for him.

Just in case you were wondering – Brody is doing very well! The most pressing issue in his schedule today is adequate nap time! #Justice4Brody Despite having experienced so much trauma already in his short life, Brody seems to be the typical strong-willed puppy. With the help of extra fluids and medication for his pain, he is getting around well and has a healthy appetite. Doctors decided that because Brody is so young, and because the pellets are not in any major organs, they will not risk using anesthesia to remove them. It shouldn’t be an issue for the pup in the future, assures Dr. Hreiz.

He’s really young, so he has a remarkable ability to heal at his age. Brody may be able to live a healthy normal life with all those BBs in him. Police suspect someone abandoned the puppy, as they have had no luck tracking down an owner, though they are reportedly close to finding the culprit.

During all of this, Brody’s bright future awaits him with open arms. Since his arrival at Ebenezer barely twenty-four hours ago, he already has hundreds of adopters trying to take him home. As of now, Project Safe Pet, who is handling the adoption, will no longer be accepting applications.

If you’re searching for a puppy who needs just as much love as Brody, hop on Petfinder or BarkBuddy to find your next best bud! There’s always someone waiting.