A new puppy was the last thing Aaron Katz expected to find as he was leaving a friend’s home on an average Tuesday. He was startled and a little nervous when he first heard the frantic yelping coming from a nearby dumpster. He told CBC news that he knew exactly what it was:

It sounded like a little puppy, so I checked the area and I looked and saw a garbage bag there, and it started moving.

He ripped open the bag, which someone had tied shut, and found a two month old German Shepherd. 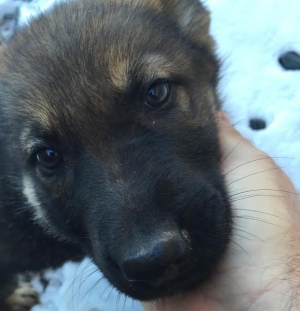 Aaron says that he was full of mixed emotions when he saw the tiny pup, whom he has named Elle. He was so relieved that the dog was alive, but furious that someone did this to her. He told CBC that he doesn’t understand how people can do this sort of thing.

It is a life. It can be someone’s best friend. In fact, Elle is already someone’s best friend – Aaron’s! In addition to finding a new pawrent, Elle’s found herself canine parents in the two dogs that were already a part of the rescuer’s home.

[They’re] parenting her essentially. She’s absolutely warmed up to us right now.

We are so saddened that someone abandoned little Elle like this, but we are extremely grateful that Aaron rescued her and that the two of them will be together furever.