Stanley the Golden Retriever is a little bit different from other dogs. His family adopted him five years ago in Florida, and they realized very quickly that Stanley was sweet, great with other dogs, cats, and children, and yet stubborn and oblivious in the most unique of ways. They knew something was up when they first met Stanley in his foster home, and he was sitting on top of the dining room table. 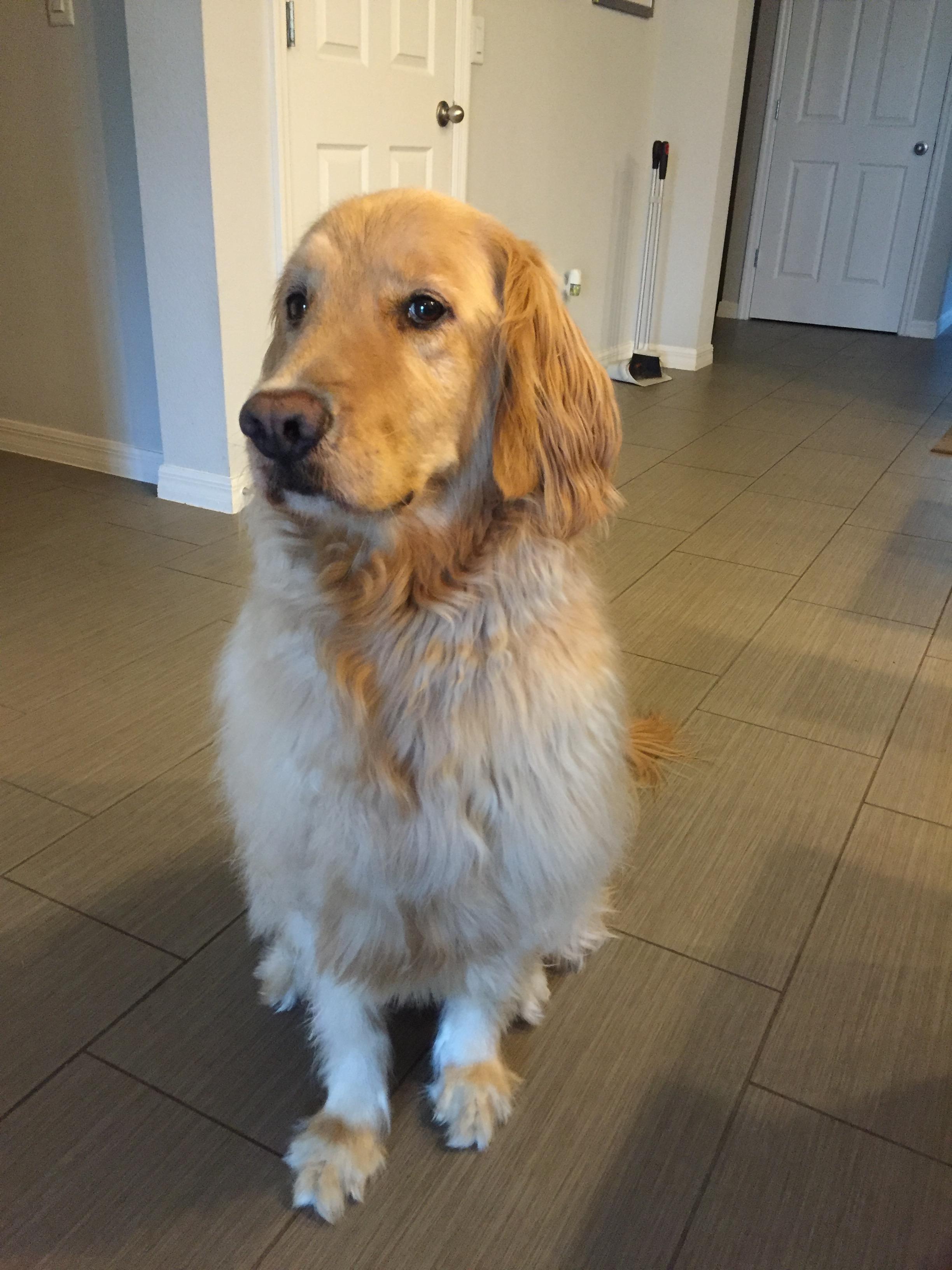 As time passed and Stanley's family tried to train him, but they realized quickly that he was pretty much untrainable. He never came when they called his name. In years of training, the only command he learned was "sit." Stanley's humans even went to the vet to get his hearing tested, and his hearing was perfectly normal. He just dgaf. They began to realize that Stanley had cultivated behaviors that were different from most dogs. For example, every evening immediately after he eats dinner, he grabs the same throw pillow off of the same bed and carries it everywhere, even outside - while peeing. 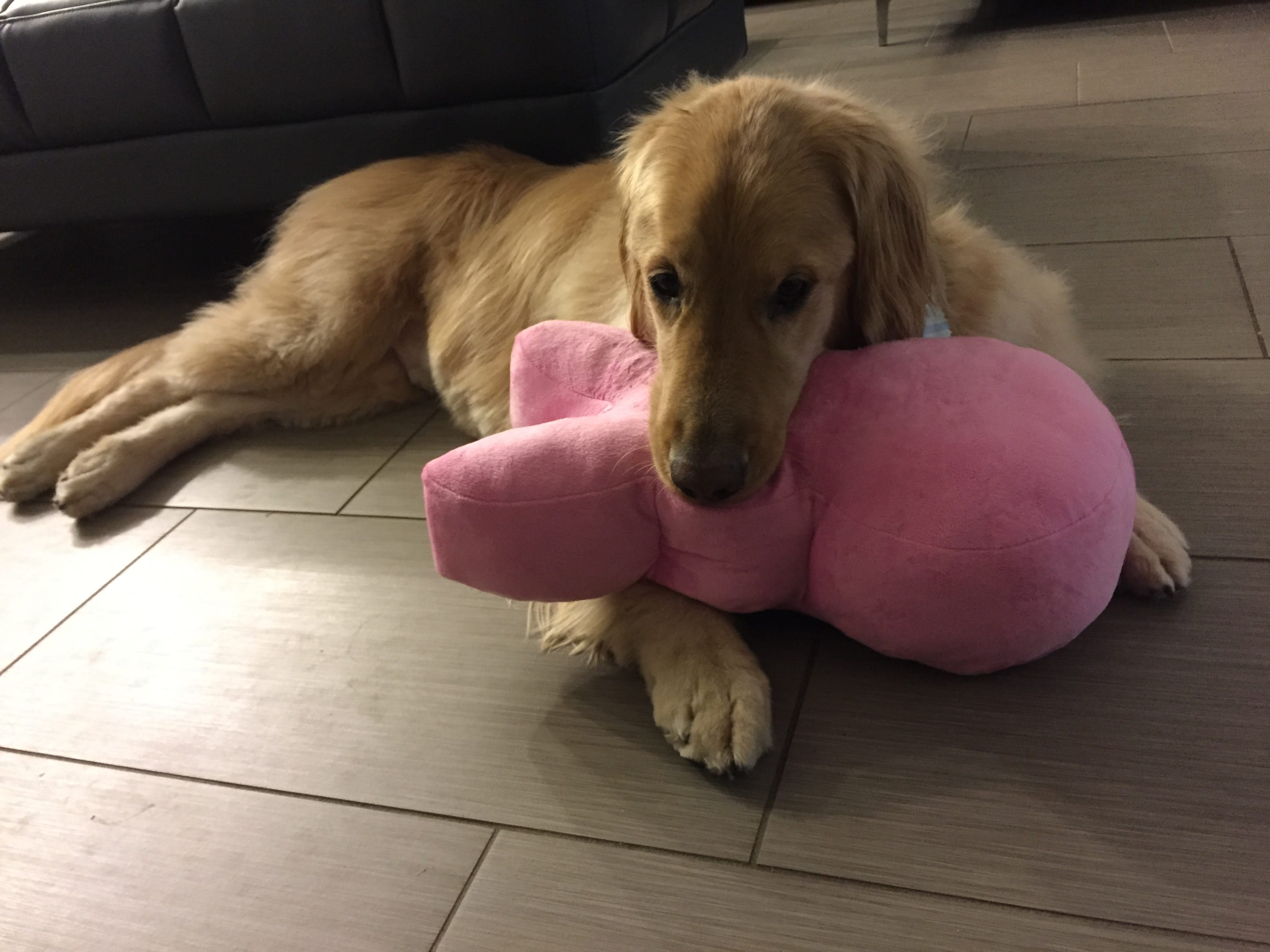 He also collects the same exact three items at the same time every day and places them under the same bed every day. If he can't find one of the items - a remote control, a stuffed Care Bear (so cute!) and a slipper - he paces back and forth visibly stressed. His humans started making the items readily available for him.

Eventually, Stanley's mom began to wonder if Stanley was had a mental illness, which can happen to our pups. She was tipped off by the protagonist in the book Hyperbole and a Half by Allie Brosh, who was concerned her dog might be suffering from a psychological disorder. Stanley's mom googled the "3 step doggie IQ test," put Stanley to the test, and found he failed it with flying colors: Step 1: See what your dog does when you call his name. Stanley's results:
[video width="360" height="640" webm="https://post.bark.co/wp-content/uploads/2016/06/tjYM460.webm"][/video]
Step 2: Cover your dog in a blanket and see how he reacts. Usually a dog will flail until he gets the blanket off of him. Stanley's result was quite different:
[video width="360" height="640" webm="https://post.bark.co/wp-content/uploads/2016/06/vltEK1o.webm"][/video]
Step 3: Show the dog a treat and while he's watching place a cup over the treat and see how what he does. Dogs usually paw at the cup until they knock it over and get the treat. Stanley's result was... not that:
[video width="360" height="640" webm="https://post.bark.co/wp-content/uploads/2016/06/m8GVUlC.webm"][/video]
Stanley didn't pass the "doggie IQ test," but it just means he thinks outside of the box. His story is one that touched many people, because we all love our pups, no matter what their so-called IQs are. Stanley's mom wrote on Imgur:

I don't think I'll ever know for sure why he is the way he is but honestly, I'm not all that worried about it. He may be a bit slow, but his silly quirks, good nature, and odd little personality makes us love him even more.