Most dogs have pretty much nailed their “shame face.” You know the look: tail tucked between their legs, cowering, daring a nervous glance up at us from underneath their guilty faces. 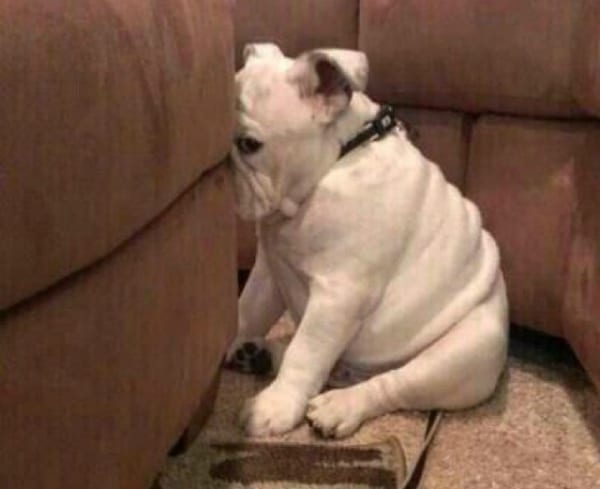 Scientists at the University of Helsinki were curious about this phenomenon, too, so they explored it further in a recent study published in the journal PLOS One.

The researchers used eye gaze tracking to evaluate how dogs reacted to human faces as compared to other canine faces. The 31 dog participants representing 13 different breeds were placed before a monitor and shown a variety of photographs of humans and dogs with three distinct emotional expressions: neutral, pleasant and threatening.

The researchers discovered that dogs are skilled at analyzing social threats, and that evaluation depends on the species they’re viewing. IN the study, dogs avoided threatening human faces, but were more likely to “stare down” threatening counterparts — that is, canine faces. When shown a dog with an upset expression, the pups exhibited greater attention and maintained longer eye contact. In contrast, when the dogs viewed a threatening human face, they showed avoidance behavior by minimizing or evading eye contact.

And when they were shown a cat face, everyone — the dogs and the researchers — threw up. Just kidding. That picture’s not even from the study. Or real. I just found it online.

But yeah, anyway, the eye gaze tracking also suggested that dogs do not arrive at these conclusions based on analyzing just one part of the face (although they do examine a subject’s eyes initially). Rather, much like humans, they take into account more than one structure — including the eyes, mouth, and the middle of the face.

From these results, the researchers posit that centuries of domestication may have given dogs a heightened sensitivity to reading and reacting to angry human facial expression. This could, in part, help to explain the special connection between man and man’s best friend.

This evolutionary tendency may very well have helped dogs bond with humans. The better a dog can perceive emotions like anger and frustration, the more able they are to respond with appeasement behavior — and therefore please their human. It’s possible that a dog’s “shame face” developed as a means of conflict resolution with humans. In short, they want to make us happy! So, in a way, man’s best friend is just sweeping the tension under the rug…along with all the other toys they’ve hidden under there. We’re looking forward to future studies to help us understand our pups even more. For now, these findings suggest what we already believe about our dogs: that they’re complex, considerate creatures who love to make us happy, and who share many of our traits. And some of those traits include being non-confrontational and awkward.