Whether you think music from their rear is music to your ears, or you’re convinced your dog’s gas is so bad it may be causing you brain damage, one thing is for sure, not all dog farts are made equal.

Researchers at the Waltham Center for Pet Nutrition figured out a way to study doggy farts up-close and pawsonal by designing a “flatulence-collecting system.”

At first glance, it looks like a regular dog jacket, but it is so much more than that. Waltham’s “flatulence-collecting system” aka the tootin’ tuxedo, has a sulfur-detecting pump right next to the canine’s anus… the can-anus. The tootin’ tux also includes a pair of disposable paper pants to “protect the sampling device from external interference and help maintain proximity of the tubing to the anus.“ Basically, the paper panties act as a portable, purposeful, doggy dutch oven. Then, an “Odor Judge” classified the farts with a very straightforward (and rank) ranking system. Using a scale of 1 to 5, the official flatulence sniffer labeled the farts as follows:

We’re living in a scientific revolution, boys and squirrels! The fart smelling studies proved that, much like humans, the more hydrogen sulfide detected in a dog’s butt-trumpet, the more “unbearable” the smell becomes. And the dogs who ate treats containing charcoal, Yucca schidigera and/or zinc acetate had gaseous emissions lower on the stink scale.

Just keep this in mind, dogs’ sense of smell is somewhere between 10,000 to 100,000 times better than humans. So however pungent, sour, or foul you find a fart, just imagine what they’re smelling. 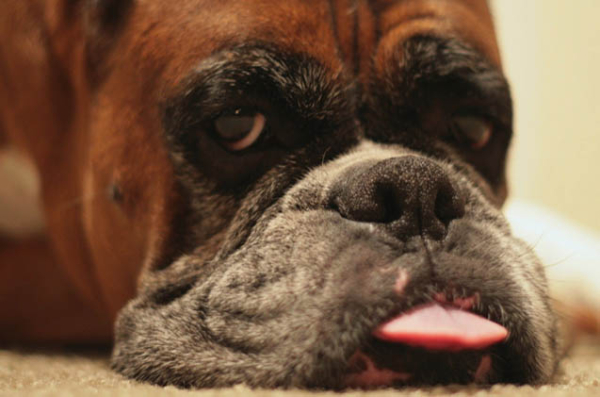 And if you want to your pup’s toots to register as more of 1 or 2 than a 4 or 5 on the sphincter scale, then you can supplement with foods that will neutralize the amount of hydrogen sulfate like charcoal dog biscuits, or ground fennel seeds (which can be added to your dog’s meal).

You can also purchase a product called Yucca schidigera, which comes in tablet form, to feed to your stinky pooch.

There you have it, kids! And to conclude this scientific, farting, feature …I give you this:

***Note to the reader: As I am writing this article, my dog just ripped a massive Neanderthal fart. A number 5 ranking for sure. You can probably smell it. This thing is transcending time and space.