Home » Fun » New Dr. Seuss Book Tells You If You Should Take A Bet On A Brand New Pet

New Dr. Seuss Book Tells You If You Should Take A Bet On A Brand New Pet

His wife, Audrey Geisel, discovered the manuscript for What Pet Should I Get? when she sorted through her husband’s notes in 2013. Audrey brought the manuscript to Cathy Goldsmith, who was the designer and art director for the last six of Seuss’ books. Cathy is also the last remaining person at Random House who had worked with the author (aka Theodor Geisel). Audrey knew she could trust her to do the story justice.

Cathy was still nervous about the undertaking. She told the Boston Globe:

“There’s a lot at stake here, for us and for him, and I really didn’t want to get this wrong.”

Cathy carefully hand-colored five different versions of the illustrations before settling on the final one. Illustrations weren’t the only thing Cathy had to contend with. There were several different versions of text, as well. She had to take her best guess at which one Seuss would have used.

According to the Boston Globe, Cathy and her team taped all of the copy to a wall in storyboard format and then read each one aloud to see which one flowed the best. 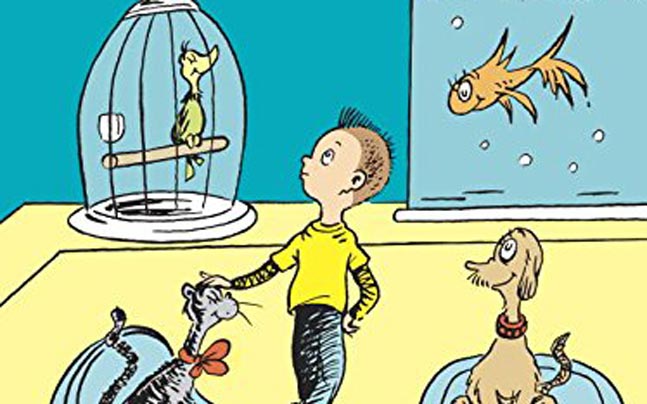 The moral of the story is one that applies to children and adults alike: Don’t overthink things.

A boy and a girl, the same duo from One Fish, Two Fish, Red Fish, Blue Fish, go to the pet store to bring home a new best friend. The catch is that they have no idea what type of pet they want. In a move that I am very guilty of making myself, the pair debates to the point that they almost don’t achieve their goal. Ultimately, it’s not a story about dogs, frogs or hogs. What Pet Should I Get? is a story about the dangers of self-doubt and how overthinking things can prevent you from getting what you want out of life.

Of course, no one should make a rash judgment about getting a pet. We all know that it’s a life-long commitment that requires careful consideration. Seuss’ point is that, perhaps, we should focus more on the positives of our goals, rather than the negatives. We should embrace life with silly glee – and plenty of adorable rhymes.

What Pet Should I Get? goes on sale on July 28. You can pre-order a copy from Amazon.