We have some good news for you, fans of Mr. Smiley: this gorgeous dog is now up for adoption.

Koby — the spelling of his name has been changed — has been doing great with Sean and Jade. And now he’s ready for a full time family of his own.

Having had Koby for a few months now, while nursing him into good health, Sean’s observations about this dog’s personality are that Koby loves to run, he loves to play, he loves to lounge on the couch. He is good with other dogs (and not as terrific with cats).

And most of all, Sean tells us, Koby loves relaxing with his people.

“He is a happy go lucky dog who would make a great addition to just about any home,” Sean says. “He really deserves a home that’ll make him their world.”

Fill out an adoption application with Baltimore Bully Crew to make this sweet grinner part of your family. Kobe’s new foster parents bought him a McDonald’s ice cream cone on his ride home from the shelter. You could say it was the skinny, heartworm positive dog’s first taste of a sweet and joyful new life. A few weeks ago, Kobe was given up by his previous owners to a Maryland shelter. He’s about four years old and is in the kind of rough shape that indicates he wasn’t treated very well.

We can only assume he wasn’t provided proper care where he was before coming to the shelter. 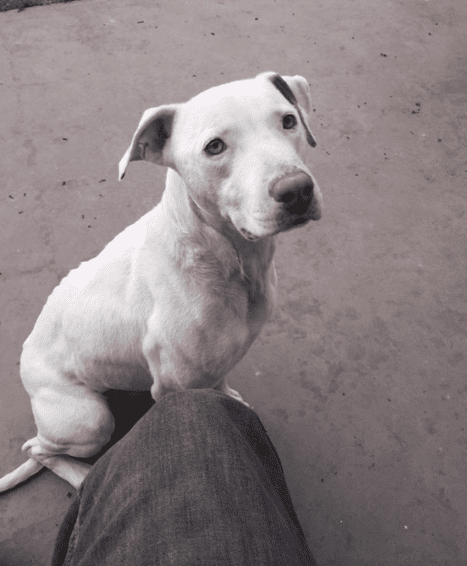 Kobe has been with Sean and his wife, Jade, and their furry crew of two Pits and four cats for the last two weeks — fostered through Baltimore Bully Crew. Sean and Jade have loved watching Kobe come out of his shell, plying him with peanut butter, chew toys, and lots and lots of snuggles to “help him realize he will never have to worry about going back to the shelter.”

And while Kobe can’t romp with the other critters much now, during his heartworm treatment — well, it sure looks like he’s still enjoying his new circumstances.

He is a very happy dog and seems to be becoming happier everyday. I would like to think he knows he is safe. If you’ll allow a little digression: Dog smiles, of course, are complex things. Sometimes a grin means submissiveness or fear. Sometimes dogs learn to flash their pearly whites because they get rewarded for doing it — in other words, saying cheese, for cheese.

“He gives that face whenever he sits down with you,” Sean says. “Since he has been getting used to receiving lots of love and food, it seems like he is smiling more often.” 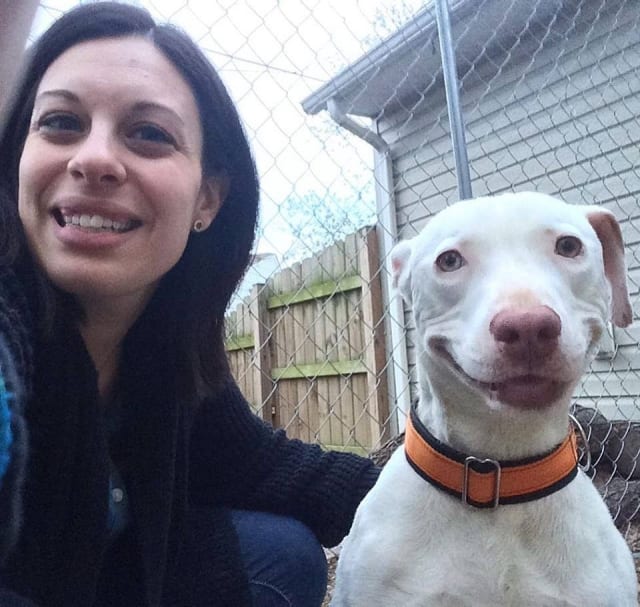 We should add: Sean and Jade’s dogs have a long history of being fantastically well-loved, not to mention adorable.

Their first pup, Delilah, was even enlisted to help Sean propose to Jade back in 2013. In another couple of months, Kobe will go on the market for his permanent home. (Keep watch on Baltimore Bully Crew’s Facebook page for updates — you can put in an adoption application sooner rather than later.)

Having been down this road with many fosters now — always Pit Bulls, always white — Sean knows it’ll be tough to let Kobe go. Sean and Jade’s dogs Delilah and Piper, with another well-loved foster named Dolly.

There may, as in the past, be some tears.

It seems safe to predict that there’ll also be some great big smiles. All images courtesy of Sean Stinchcomb