Kristen Auerbach kept hearing the same story, over and over, from folks who work in animal shelters: That shelter staff and volunteers didn’t believe their own wonderful pet dogs would have passed shelter behavioral tests. That they didn’t think their own dogs would have made it out alive.

It’s really easy for most people to imagine how their own, beloved pets would act after being confined in a scary, loud kennel for three days. Some would be bouncing off the walls, others would be cowered in a corner, growling at the strangers walking by and others would just be crying, whining and barking.”

She went onto say that these behaviors, which are simply the result of the stress of the shelter environment, result in the deaths of many dogs. There is no single behavioral assessment used on dogs in animal shelters. But many shelters employ some sort of behavioral evaluation to see how a dog reacts to various situations, like when a person approaches them, while they are in their kennel, or when a food bowl is taken away, or when his or her lips are lifted, and so on.

Depending on the shelter’s resources and programs — if they have a behaviorist on staff, for example, or if they have enough space in the kennels — the dog’s response to these stimuli may determine if she or he is even made available for adoption, or will be euthanized as unadoptable.

That’s what happened Carmella, at the government-run Northern Virginia shelter where Kristen was then working.

It was 2012. Carmella was 8 years old, and had come into the Fairfax County Animal Shelter as a stray.

“And she was such a good girl,” says Auerbach. Now, Fairfax has a greater than 90 percent “save rate” — it is considered to be no kill, and a model for other municipal shelters. Then, the situation wasn’t as good. The shelter was still euthanizing shelter pets because there wasn’t enough space for them, and had restrictions on adopting out Pit Bulls.

A quarter of all dogs were being euthanized at the time; that figure goes up to 80 percent for Pits. Dogs whose behavioral evaluations didn’t go smoothly were among those who often lost their lives.

That includes Carmella. During the “food-guarding” part of her behavioral evaluation — when staffers placed a bowl of wet food in front of a dog, and then used a long rubber hand to take the bowl away — Carmella bit the rubber hand.

Even though she was a great dog in every other way, we were afraid to adopt her out after she ‘failed’ the test. She was euthanized and at the time, myself and our director promised each other we’d find another way to help dogs like Carmella in the future. I remember one of us said to the other, ‘If only we could get her in a home, she probably would have been fine.’ Not long after that, Auerbach learned of a study finding that failing a food guarding test is not predictive of future behavior in a home — in other words, that the dog who snaps at a rubber hand pulling away her food, is no more or less likely to do the same to a human hand in a real home.

This finding wasn’t a surprise. Shelters are stressful environments for dogs. Think of how you act when you’re stressed — are you at your best? On top of that, a stray dog presented with food for the first time in a while might act differently than would a dog who’d been fed regularly for weeks.

For Kristen, this was a “lightbulb moment”:

We knew there had to be solutions out there that would allow us to gather better, more accurate information about the dogs posing behavioral challenges in our shelters.

The shelter began sending dogs with behavioral “challenges,” as Kristen puts it, into foster homes, to get “more accurate assessments” of what their actual personalities were like; how they could be expected to act as pets. The results were great. The dogs acted great. A dog named Patty — the girl in the unicorn costume here — especially stood out.

She’s a small black-and-white dog who stood at the front of her cage, barking at anyone who walked by. She’d also bite her leash, jump on her handlers, and nip at people’s feet.

A shelter staff member who looked through Patty’s history noted that an animal control officer found her overheating in a locked car. Perhaps, staff speculated, she was still traumatized by that experience; that being locked in her shelter kennel was too similar to being in the car where she’d nearly died.

That staff member took Patty home, to see if her disposition would improve in a different environment, and “the transformation was striking,” says Kristen.

At home, Patty was laid-back and relaxed, calm and easygoing. She even got along with the household’s other dogs.

Patty went into a experienced foster home. From there, she got adopted, “where she remains today, a happy, beloved member of her family,” says Kristen — who is hoping to help other dogs like Patty to get that same chance. Auerbach decided to turn her gut instincts, and Patty’s happy story, into a full-on study.

From 2013-2015, 52 medium and large breed shelter dogs, who had behavioral challenges in the shelter that made them difficult to place in adoptive homes, were examined.

Dogs who were deemed severely aggressive weren’t allowed into the study. A few of the dogs had minor bite histories, but mostly the 52 did things like growl if their toys were taken away, or lunged or pulled while on a leash. While the shelter’s save rate was improving, and it had started adopting out Pit Bulls, these dogs were still at a high risk of euthanasia.

Instead, the 52 lucky study subjects went into 16 experienced foster homes (whose humans were aware of the dogs’ backgrounds and evaluations). 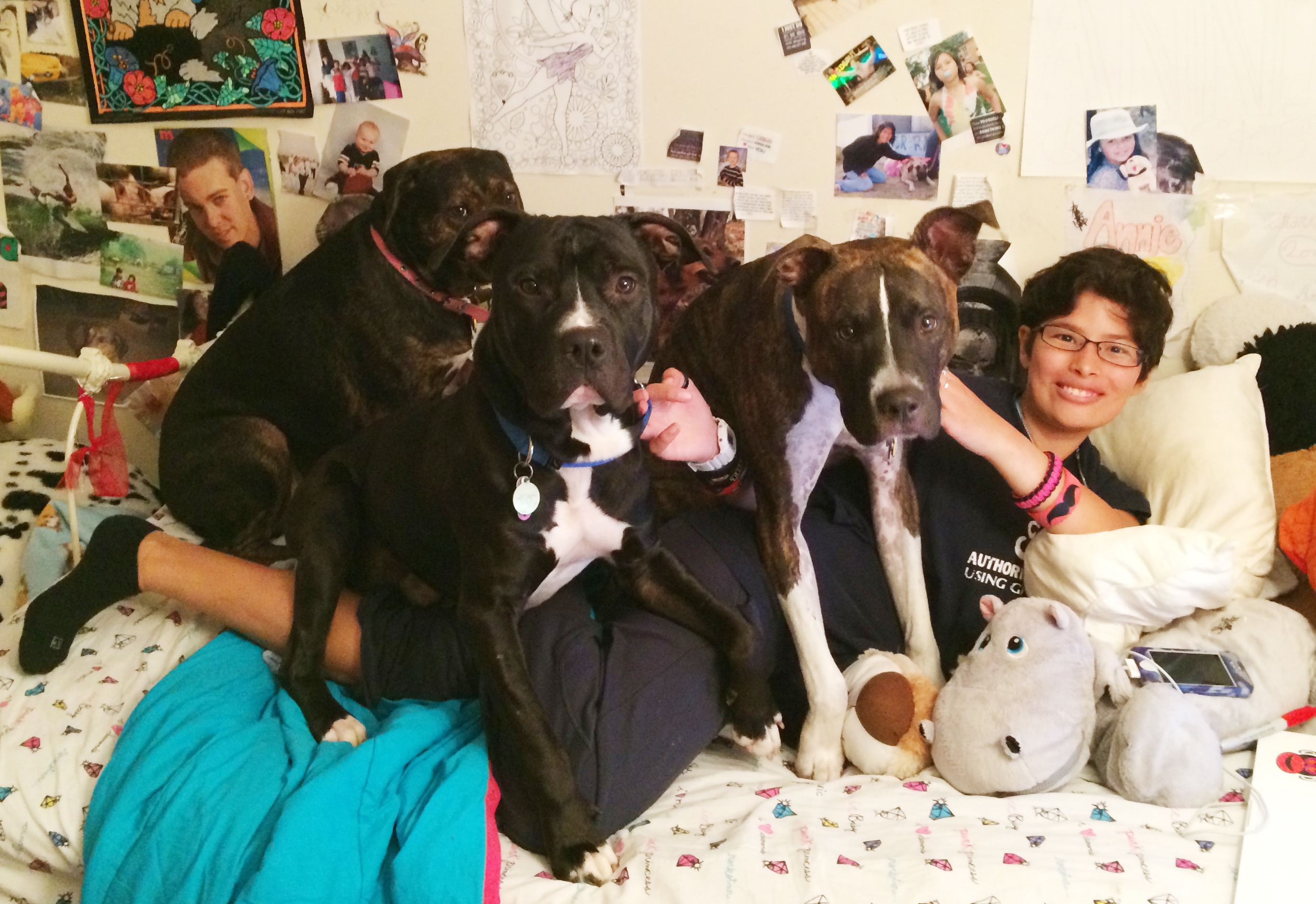 Kristen looked to see what the dogs’ behavior was like in the foster homes. She also examined whether the dogs wound up adopted, or euthanized — and why they were euthanized, if the latter. She also kept track of the dogs’ ages.

Forty-seven of the 52 dogs were adopted. The rate of retention — i.e., whether their adoptive families kept them or brought them back to the shelter — was, in fact, higher than for dogs overall.

Kristen also discovered that the vast majority of the dogs identified as having behavioral problems were young — which suggested a connection between youthful exuberance and doing poorly on tests. The foster families frequently used the words “smart” and “highly intelligent” to describe the dogs, too — which made sense to Kristen, that “dogs who are smart, clever, intelligent would also be the ones who might have the greatest difficulty coping in the shelter environment.”

Most importantly, in every single case, the dogs’ behavior was better in their foster homes. Sure, sometimes the foster families or adoptive parents still complained about the dog pulling hard on the leash, or chewing up on a shoe. Exactly like you might complain about your own dog doing the same.

What this study shows is that if you take a dog demonstrating common behavioral challenges in a shelter, and take them out of the environment into a home, you are very likely to see those behaviors disappear and the dog’s behavior improve. These findings have major implications for shelter dogs.

Kristen cautions that her work does not mean behavioral evaluations have no place in responsible sheltering. They still give some information about a dog’s personality and state of mind. They can help shelter staff understand what training or environment might help the dog best thrive. The tests are still useful, for some purposes.

But these findings mean that dogs with behavioral challenges in the shelter may do great once they are in a home. They are one more data point in the case against using behavioral evaluations to guide euthanasia decisions — and are another reason that foster homes are so important, both to get pets out of the shelter and also to get a more accurate picture of what their personalities are actually like, so that they can then be placed into the most appropriate permanent homes.

They provide an extremely powerful tool to help save more animals’ lives. The research is attracting notice — and, Auerbach hopes, will prompt some change. She first presented her findings at the 2015 National Council on Pet Population Research Symposium. The ASPCA’s Dr. Emily Weiss — who created SAFER, one of the most-used shelter behavioral evaluation tools — blogged about it after that.

In April, the study was written up in the Journal of the American Veterinary Medical Association. And Auerbach has been asked to present her findings again, soon to a dog trainers’ association, and over the summer to attendees of one of this country’s major no kill conferences, where shelter workers and rescuers and policy makers go to learn about the innovative ways that more animals can be given the lives they deserve.

Auerbach is hoping to perform a new study, too. This one will look at 500 dogs, in different cities and towns. She thinks that we owe it to these dogs, to all dogs, “to figure this out,” she says.

We owe it to ourselves, too. Auerbach recalls one dog from the study who has become his person’s companion as she recovers from cancer. Another who is an emotional support dog for teens in crisis.

A third, who is nothing more — and nothing less — than his owner’s best friend. The owner told Auerbach that this dog, Hank  — the big spoon in that photo at the top of the story, of two dogs cuddling — was the best thing to happen to him in 20 years.

“The dogs saved in our study, they’re not just leading lives, they’re living deeply meaningful, purposeful existences,” Auerbach says. “They taught us that their lives, which could have so easily been lost, are truly lives worth living.” Featured image — of Hank, from the study, cuddling with his foster sister — via Fairfax County Animal Shelter