****Note: Service dog training is a unique process that requires an extensive amount of work and time. Not all dogs are suited for all needs. While I trained my own service dog, my experience is by no means the norm. It is not recommended for everyone. It’s also important to remember that when working, your dog is not your pet. Service dogs are there to perform tasks to mitigate disabilities.

In 2011, I adopted Buttons from NYC Shiba Inu Rescue. He’d never been on a leash, never been in a city and never been away from the nearly 30 dogs he’d lived with in his first 11 months in a hoarding situation.

He was terrified of everything, which left me feeling like maybe I wasn’t the right human for him. After a rough first month, we started to bond. I knew that I was going to do whatever it took to make this boy feel safe with me and with the world around him.

This once scared pup now prances around town letting everyone know how beautiful he is – all because I helped set him free from his fears.

Over a year ago, he started to return the favor.

I am legally blind. Over the past few years, my sight has degraded tremendously. I have very little depth perception, no peripheral vision in my left eye and I cannot see low contrast colors.

Stairs are a literal death trap.

One day, I noticed Buttons was taking stairs one by one. He carefully put his paw at the edge of each stair and waited for me to step down before he moved on.

His paws gave me the contrast I needed to see the stairs. I could also feel how deep a step was by how far he pulled on the leash.

I thought maybe his actions were a fluke, but he kept doing it.

He wanted me to feel safe with him and with the world around me. He wanted to help me feel free.

I took him up on his offer.

I couldn’t afford a service dog trainer and because Buttons is a Shiba, I wasn’t sure he’d perform for one anyway. I decided to train him myself.

Let me be clear, training your own service dog is not easy. The time and emotional investment is immense. It worked for me, but we are an unconventional pair. It’s not something I’d recommend for everyone. I should also note that I did receive advice and tips from several dog trainers.

Shibas aren’t known for listening. They think they’re smarter than humans, and they probably are. But when it comes to keeping me safe, Buttons will do whatever is necessary. He becomes a different dog when he wears his working harness. Nothing else matters to him except helping me to move through the world. He ceases to be my pet. He becomes my lifeline. Besides keeping me from tumbling down stairs, Buttons alerts me when there’s something on my left side that I can’t see or if there’s a low contrast object in front of me.

The first time we went to a store together, I came home and cried. I had no idea how much independence I had lost until he gave it back to me.

I do have a cane, but it has always made me feel awkward. Now, I no longer fear going into crowded places. I don’t walk into people or smack my arms into things that I didn’t know were there. I can go up and down stairs without having to hold onto another human. I’ve always known my sight would get worse, but that hasn’t made it any less difficult. Still, I know I’ll be alright. I’m not in this alone.

His deep love for me doesn’t stop with sight.

In 2013, one of my brothers died. It was sudden and devastating. It is no exaggeration to say that I would not be writing this if it was not for my Shiba. I had to force myself to get out of bed, to eat, to shower. I had to do those things because Buttons needed me. He grounded me in reality when I was so very lost. Even now, there are moments when the magnitude of my brother’s loss hits me so hard that I cannot breathe. Buttons comes up and lifts his paw, which is his way of saying “I demand pets.” I sit there ugly crying petting my dog and over time I stop crying. Buttons pulls me out of the void of grief. Without him, I also wouldn’t be working for BarkPost. In fact, I didn’t apply for this job. He did. He wrote in and told them that his mom was kinda weird and didn’t quite get hoomans. They seemed to be okay with that. Even though I work remotely, I get these humans. They’re superbly sarcastic and a little bit weird. Just like I am. They also care very deeply about the world, other humans and, of course, dogs. 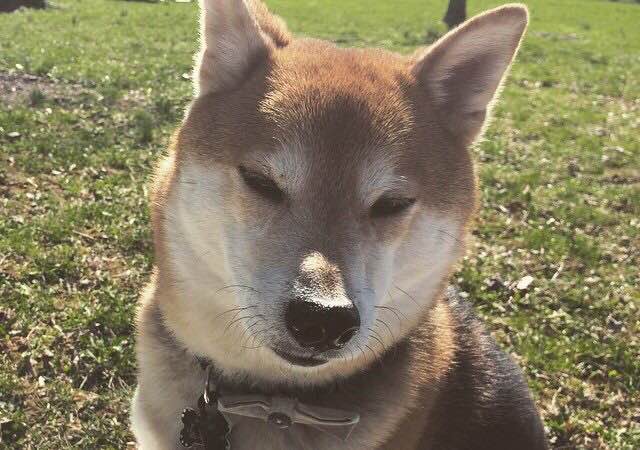 I’ve never been more honored to write for any place than I am to write for BarkPost. I’ve gotten to do some amazing pup-vestigative reporting. I’ve gotten to inform people and learn a little along the way. Yes, I caption a lot of silly photos, but those posts make a difference. With all of the stress in the world, BarkPost is a space where people come to feel safe and experience joy. That matters.

And each time I write a cute caption or report on a story, I feel like, in some way, I am writing tiny love letters to Buttons, for whom no words will ever capture just how much I love him.