Harvey the Staffordshire Bull Terrier is a happy-go-lucky boy with a sensitive side, which makes him quite ill-suited to life at the Jerry Green Dog Rescue in North Lincolnshire, England. It’s not that Harvey doesn’t enjoy the company—shelter staff love to love him—but the environment can be loud and particularly stressful on such a gentle soul. Centre Support Officer Paige Chappill often brings Harvey into her office to relax, and a video of the sweet boy snoozing has been warming millions of hearts around the world.

Just hours following the video’s debut on Facebook, it was shared thousands of times with messages coming as far as Australia and the United States. Chappill tells us:

He spends almost all of his time with our staff members in offices so he has lots of love and interaction. I posted the video of him in my office in a bid to find him a forever home once he’s been fully assessed, and our supporters quickly got involved by sharing the post and commenting with words of encouragement.

She told the Scunthorpe Telegraph that Harvey loves company and is on the lookout for a family who can spend lots of time with him. “Ideally someone working from home,” she added, “or who will be able to bring him with them for work, so he’s not alone all day.” The brindle boy has no trouble making friends with fellow rescue dogs, though he does appreciate having his own space and prefers polite company. Cats are a different story; Harvey was surrendered after chasing cats at home, so he won’t be placed with a family with felines or other small, furry animals.

With over 1.5 million Facebook views, Chappill says the amount of support their small charity has received is “absolutely amazing and overwhelming.”

While the rescue gets some much-deserved attention, Harvey will be visiting the home of a prospective family—he already met and got along with their existing dog. And if THAT doesn’t make you smile, Chappill shared that Harvey’s “famous blanket” will be packed up and sent with him wherever he goes. 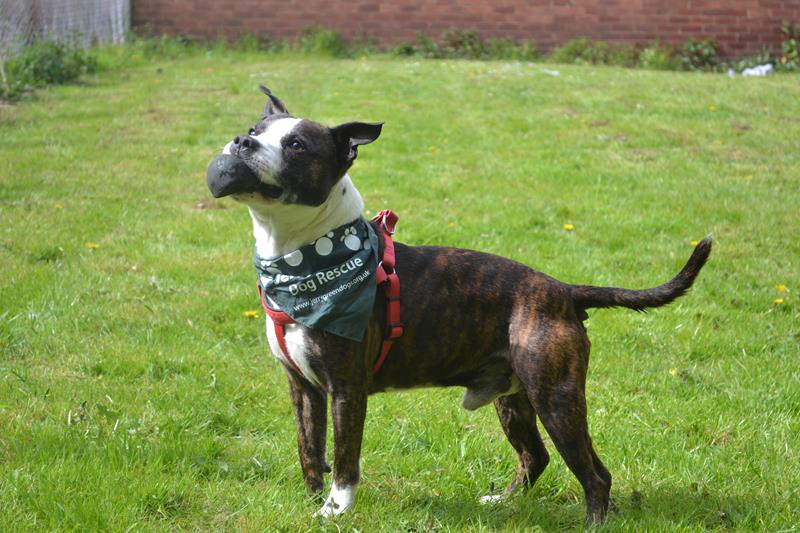 Jerry Green Dog Rescue will care for around one thousand dogs this year, many of them who find shelter life difficult, as Harvey did. You can make a donation to this temporary home via the rescue’s website through Charity Choice.