There’ve been some stories circulating recently about a giant dog that was almost put to sleep because shelter workers were afraid of him, but BarkPost did some digging to find the truth about what happened to Loki the 170-pound Neapolitan Mastiff. Loki, formerly named Pluto, was just another unfortunate dog whose owners were evicted from their apartment and had nowhere to go with their massive dog in tow. Katy Hansen, who works at the New York City Animal Care Center, told BarkPost that the owners abandoned the dog in their old apartment and went back each day to feed him until the superintendent told them he had to go. The owners had no idea what to do with him, so they told the super to deal with it.

Unfortunately, the very large dog was reported as having lunged and growled at the super when he went in to get him, so he had to call the NYPD to handle the situation.

When NYPD officers came to pick Loki up to transfer him to a New York City Animal Care Center, they were also met with the barking and lunging of an animal in distress. They felt they had no choice but to dart him twice with tranquilizers and haul him off on a stretcher. Understandably, a VERY LARGE abandoned dog who was barely being taken care of was upset and behaving in a way that was worrisome to those trying to help. The poor guy woke up all alone in a cage, groggy, confused, and surrounded by the fear and chaos of shelter life. He continued to occasionally growl at those around him, keeping ACC workers at bay and unable to do a behavioral assessment on him, but he was given medical treatment and found to be heartworm positive. We imagine that would make him a bit cranky too, on top of coming off of a wild tranquilizer trip. Regardless of his size and behavior, ACC staff continued to feed him and give him medical treatment. The shelter is not authorized to treat diseases like heartworm, so they began reaching out to New Hope Partners and rescue organizations to find someone with the resources to help that could take Loki. He needed to start treatment immediately.

There was another glitch in Loki’s story which was that the ACC was in contact with the original owners and they were trying to find a way to get their dog back. NYC ACC went through a training program last year courtesy of the ASPCA, which helps them coach people wanting to surrender their pets on other options, such as training, spaying/neutering, and medical treatment. According to Katy Hansen, they actually prevent an estimated 150 surrenders each month thanks to this coaching! They were working with the owners to help them get Loki/Pluto back, but sadly they did not have the money to pay the return fee that covered the medical treatment Loki received.

ACC ended up needing to place Loki on the At Risk (For Euthanasia) List after two days because he needed to continue medical treatment right away. They spoke with Rescue Dogs Rock NYC co-founders Stacey Silverstein and Jackie O’Sullivan, who saw Loki on the euth list and reserved to have him pulled and transferred to one of their vet partners. Here, they could continue giving him the medical treatment that he needed for heart worms, conjunctivitus, double ear infections, and infected paws. It was also noted that even at his massive size, Loki was actually about 50 pounds underweight, meaning that he’s really supposed to weigh in around 220!

Stacey Silverstein told The Dodo that she herself was a little intimidated by his size when she first met him, but that he “quickly won her over.” When she spoke with us at BarkPost, Silverstein said that the low growling was more like a purr and the way that Loki likes to communicate with people, but due to his humongous size it “practically reverberated the walls.” That would probably have us thinking twice about going near a 170-pound dog! Check out the size of those paws!

As it turned out, once things settled down and Loki started to feel better with the medication, he was really just a gentle giant. His former owner had sent ACC glowing surrender notes on his calm and laid-back nature once they realized they couldn’t take him back.

These notes included that he had lived with cats as well as children ages 6-14 and was always gentle when he played. He has never bitten a person or animal, doesn’t mind being pushed off of furniture, and will easily give up toys and treats. The owner wrote: “If his food bowl was touched, Loki would stop eating and back away from the bowl.” Loki quickly became a favorite while he stayed at the vet. Stacey told BarkPost that he was just a big baby who loves belly rubs and roast beef. She went on to say:

“Everyone at the vet was just completely in love with him. They said no one wanted to work because they just wanted to hang out with Loki all day. It was a total Loki party!”

They would lie down on the floor and stretch out alongside of him, giving him all of the belly rubs he could handle. Check out this video of the big guy getting some roast beef and then showing off how much he loves getting petted by his friends:

The best news of all came last week when it was reported that Loki had found his new forever family! From being abandoned by his first owners to placed on the At Risk List and almost put down, it didn’t take long for Loki’s giant gentle heart to shine through. We’re sure it was hard for his rescue pals to say goodbye, but it’s all roast beef and belly rubs from here on out, big guy! 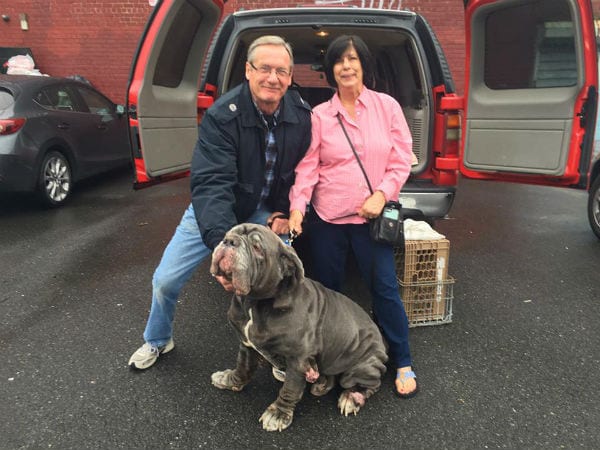 In order to help Rescue Dogs Rock NYC continue to rescue and provide medical treatment to many more dogs in need like Loki, please consider donating here. Be sure to follow them on Facebook and Instagram for updates and to read stories of other dogs they are currently helping.

As for the NYC ACC, they have dealt with a lot of fallout over the original stories that were published without getting a statement from them providing their side of the story. Katy Hansen told BarkPost:

“We cannot turn any animal away, regardless of size, breed, behavior, health, etc. We took in over 34,000 animals in 2015, and had a very successful turnaround (adoption) rate of 86 per cent. Last month, our turnaround rate was actually 96 percent.”

(It should be noted that the threshold for being considered a no–kill shelter is 90 percent turnaround, so ACC is just barely under that and getting closer every year. That is a pretty amazing feat considering the number of animals they take in annually.)

New York City Animal Care Centers provide a host of wonderful resources, from finding lost pets to low-cost spay and neuter programs. Visit their website to find out more about what they offer, and of course check out their adoptable animals while you’re there! Remember, anyone who is involved with rescuing animals is doing so because they care, whether they work for an Animal Care Center or a no-kill rescue organization. The sad reality is, there are just too many homeless animals out there right now to be able to save them all.

We can all do our part to reduce this number by continuing to educate everyone around us about the importance of spaying/neutering, ending backyard breeding, and rescuing our pets from shelters. Let’s do what we can to make this year the most successful one for adoptions yet!