Home » Fun » What Does A Dog’s Tail Wagging Mean?

What Does A Dog’s Tail Wagging Mean?

What Does A Dog’s Tail Wagging Mean?

We tend to interpret our dogs’ tails in one of two ways:

There’s a lot more meaning hiding on our dogs’ butts than you might think. Sometimes, there’s an entire conversation happening back there.We’re used to the furiously fast wagging tail, but some emotional indicators are pretty subtle.  Dog tail signs can be pretty complex. Scientists in Italy found that the direction of the wag tells a lot about your dog’s mood.

Swinging their tail left vs. right

Dogs swing their tails to the right when they are happy or excited. A shift to the left indicates that all is not well.

These movements are often very slight and difficult for us hoomans to perceive. Dogs, however, are pretty keen on picking up “tail speak.” Even if we don’t hear the butt conversation, dogs totally do.

Here’s a chart that can give you a primer:

Most tail speak is easy to decipher, if you know the language. 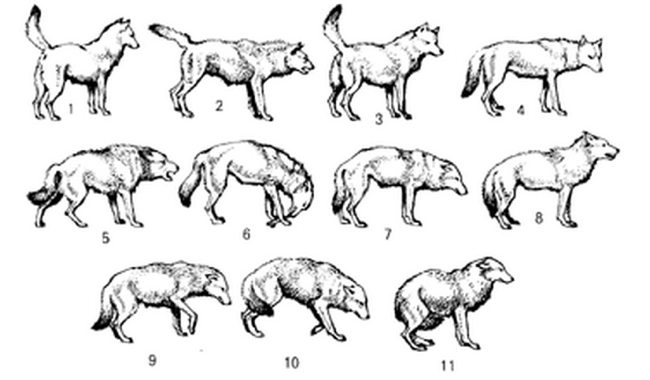 A pup with their tail high, but not upright means they’re basically the most popular kid in the room–and they know it.

Straight out, hackles raised and an intense stare mean the pup is about to throw down.

Their tail is up, but not too high, and they’re moving around. A tail that is also accompanied by a full body wag generally means your dog is super happy.

Basically this is your dog as a teenager during the holidays on their phone, ignoring everyone.

If their tail is lowered, but they’re barking and their hackles are raised, it generally means your dog is feeling defensive.

Usually dogs are pretty neutral when they’re eating or chewing, but it’s always good to not a approach a dog you don’t know with a resource. They can get defensive fairly quickly.

When a dog’s tail is lowered, and their ears are back, it means they’re trying to appease and say the other party is in charge. It’s the closet you get to a dog apology.

Figure 8: Unsure about situation, aroused but not aggressive

Tail is lowered, but head raised and ears not back means the dog isn’t quite certain how to react, and is waiting to see how events will unfold.

Head down, tail between legs and ears back, especially with one paw raised means the dog is confused and feeling insecure and so is trying to appease and defuse the situation.

The lower the head and the tail, the more submissive and anxious a dog is feeling.

Figure 11: Submission to the point of shutting down, scared

A dogs tail between his legs indicates what? If a dog’s tail is completely between their legs, their ears are back and are making their body super small AND they’re avoiding looking at you it means they’re truly frightened and feel they can’t get out of the situation, so they’re shutting down.

Now you know the language of your dog’s butt. Pretty cool, right?

6 Warning Signs A Dog Is About To Bite

What Does The Color Of Your Dog’s Poop Mean?

Is Your Dog Angry, Or Just Playing? This Is How You Tell The Difference