We would like you all to meet Stubby, Sergeant Stubby to be more accurate. He’s a decorated WWI Hero, friend to presidents, and a total looker. 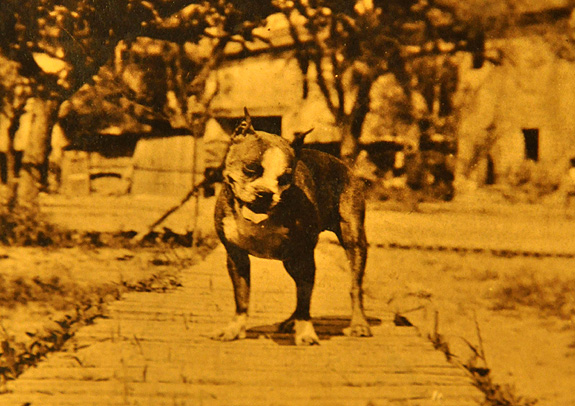 In 1917, Stubby, a Pit Bull puppy with a “stubbed” tail, was living on the streets of New Haven, Connecticut near an Army training camp at Yale University. It was there that a private named J. Robert Conroy found and adopted Stubby. Stubby underwent major training at camp. He learned to respond to bugle calls, marched with the troops and saluted fellow soldiers.

When it came time for Conroy to ship out, he smuggled Stubby aboard the USS Minnesota in his overcoat. 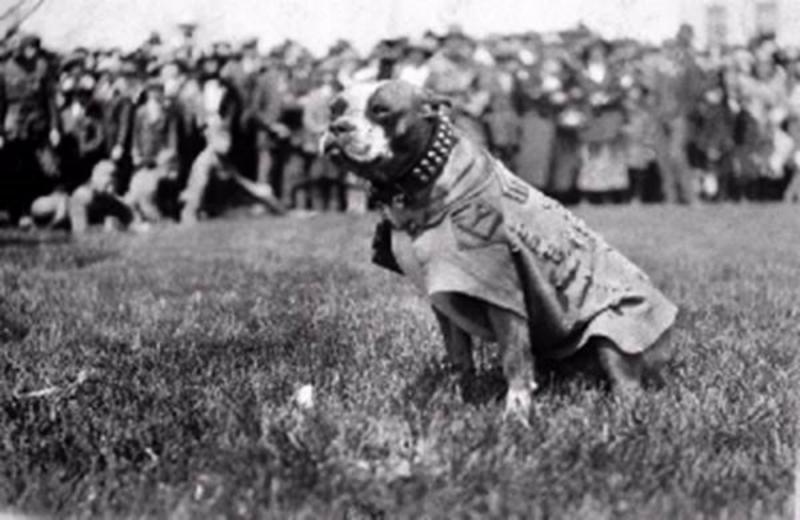 Stubby was smart enough to know the difference between English and German. He used these skills to determine which wounded soldiers to help on the battlefield.

His language skills also came in handy in France. Stubby sniffed out a German spy, bit him on the butt and held on until help arrived! Good dog! For this act of valor, Stubby became the first war dog ever to be promoted to the rank of Sergeant. This meant he now outranked his human, Corporal Conroy.

Another time, mustard gas almost killed the pup. Once he recovered, he could detect incoming attacks and alert the human soldiers. In the image below you can see the Stubby patches his regiment wore on their gas mask packs. Stubby served 18 months on the Frontlines, fighting in 17 different battles and four major campaigns. He survived shrapnel wounds and carried messages under fire.

General John J. Pershing, Commander of the US Forces, personally awarded Stubby a gold medal for heroism. That wasn’t his only award. The brave pup also earned a Purple Heart, the Medal of the Battle of Verdun, and the Republic of France Grande War Medal. After the war, Stubby was awarded lifetime membership in the American Legion, YMCA and American Red Cross. The pup went on to meet and charm Presidents Woodrow Wilson, Warren G. Harding and Calvin Coolidge. Who wouldn’t be charmed by the handsome fellow?

Conroy eventually attended Georgetown University where he studied law school. While Conroy studied, Stubby parlayed his fame into a sweet gig as the Hoyas mascot. In 1926, Stubby died in Conroy’s arms. He was so loved that The New York Times ran an obituary that was 3 columns wide and half a page long. Stubby is remembered as America’s first canine soldier and one of the most selfless heroes our country has ever known.