Home » Fun » The 5 Most Expensive Things My Dog Ate

The 5 Most Expensive Things My Dog Ate

Note: All images in this post were provided by the author, Christine DiGangi.

This year, my husband and I decided to adopt a puppy. Our past experience with pets consisted of fish and parakeets, so we had a lot to learn: We talked to friends with dogs, bought “Dogs for Dummies” and did some Internet research. Upon accepting a future full of chewed belongings, various odors and constant vacuuming, we went to a shelter.

In March, we brought home Marvin, a 3-month-old mix of who-knows-what. He was a small guy, about 16 pounds at the time, and very shy. When he was small, he couldn’t even make some of his toys squeak because he wasn’t strong enough yet. Adorable.

That didn’t last long. Both the vet and dog trainer we use say he has exceptionally high energy, even for a puppy, and figuring out how to handle that has been an adventure. A costly one.

We planned for all sorts of expenses, but until recently, I hadn’t considered the value of everything he has destroyed. We’ve had him for nearly eight months, and our now 50-pound puppy has annihilated many things. Regardless of whether we were naive or misguided about pet costs, we never factored these expenses into our initial puppy budget:

Marvin loves to steal our workout stuff. He has a thing for my running shoes, which have a hole because of him, but they’re still usable.

The other day, Marvin tore apart my cycling gloves. I had owned them for a few years, so it’s not the biggest deal, but I had to replace them immediately. After at trip to Disney World (before we got Marvin), I brought home a particularly round stuffed Winnie the Pooh. Since the first time he encountered “Fat Pooh,” Marvin loved it, but we were able to keep it out of reach for the first several months. Marvin finally succeeded in his attempt to kidnap Fat Pooh one day while I was on an important phone call.

He also ate three throw pillows last week. A relative made us pillows that looked like Scrabble tiles, spelling LOVE, and gave them to us for our wedding. Marvin and these pillows co-existed for months without issue. They were friends, you could say. He turned on them last Friday, which is problematic when you have pillows that spell things. We just have L now. 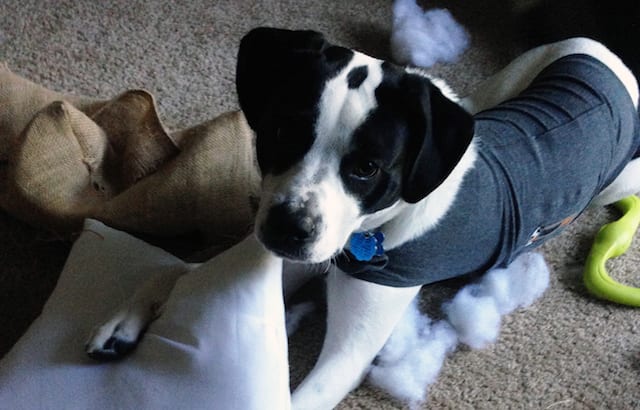 The pillows weren’t the first friends he turned on. After months of loving and carrying around the same toys, an owl and a man-shaped squeaky toy, he gutted them. We went through four owls because he liked them so much, but Owl IV lasted only about 10 minutes, so we stopped buying those.

We also subscribe to a monthly box of dog toys and treats. Most things don’t make it past their first night in the house — my favorite was when he broke a treat puzzle instead of solving it — but a few are still around.

Marvin doesn’t have a bed anymore; he now likes to sleep on a cheap fleece blanket, and he chews it from time to time. We should have started with the $7 blanket, rather than the three dog beds he went through, which cost $30 each and who-knows-how-much time re-stuffing and repairing them until we gave up. It was as if the new stitching were a challenge he couldn’t ignore. Now, of course, he tries to sleep in our bed. Like many dogs, Marvin likes shoes. He ate my husband’s Sperry boat shoes, and we’ve also both lost a pair of slippers, even though we do our best to never leave footwear on the floor.

Last month, we discovered how much Marvin loves tug of war. Unfortunately, we discovered that when the weather got cool and we started wearing long sleeves. I guess he saw sleeves as toys. We’re down four sweatshirts and a jacket. Upside: We learned how to properly play tug of war with Marvin.

Things That Don’t Belong to Us

Let’s hope my landlord doesn’t read this. (If so, Eric, I’m sorry.) Aside from the usual wear and tear a puppy unleashes on a home, Marvin ate something we won’t be able to cover up.

He ate three patches of carpet in the townhouse we rent. Based on a little research, I think this is the most expensive thing he ate. That’s about $1,300 in less than a year, but we haven’t yet replaced most of it. Not everything is on this list, either.

While that’s a heck of a lot of destruction, I know there have to be stories out there that can top mine. What’s the most expensive thing your pet has destroyed? In the comments, tell us what happened and how it affected your finances.

This post originally appeared on Credit.com. Christine DiGangi is a reporter and editor for Credit.com, covering a variety of personal finance topics.

[Free Resource: Check your credit score and report card for free with Credit.com]