Home » Fun » The Top 5 Tuna Moments Of All Time

The Top 5 Tuna Moments Of All Time

Tuna Melts My Heart is a very busy Chiweenie. He’s an Instagram model, a world traveler and, now, he is an author!

To celebrate the pawblishing of his new book, Tuna Melts My Heart: The Underdog with the Overbite., we’ve rounded up the most memorable moments of this dogstar’s life. His previous owners, who had abandoned him on the side of the road, clearly did not see the glorious personality hiding behind that overbite. Thankfully, Courtney was smitten by his charm and she shares Tuna’s cuteness with their over 1 million Instagram followers. In 2014, Tuna went on a whirlwind 8 city bark-and-greet tour to shake paws with his fans. In addition to the casual hellarfs, there were also fancy benefit dinners (oversized bowties required) to raise money and awareness for animal rescues, an issue that is near and dear to this underdog’s heart.

3. His stint as Santna Paws. 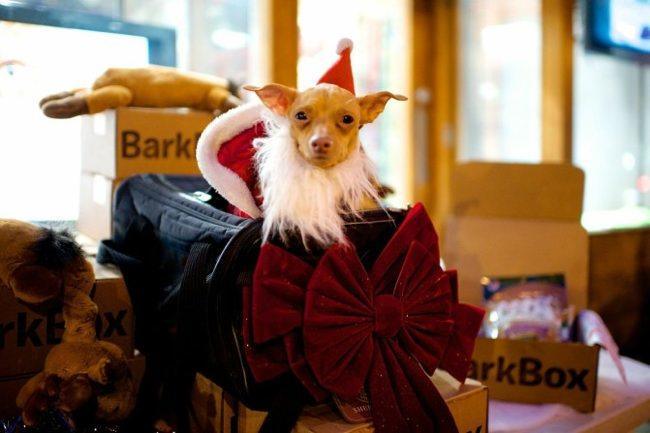 Last Christmas, Tuna helped us surprise the pups at Animal Haven Rescue in Manhattan with a huge stack of BarkBoxes!

Tuna also gave out special gifts to people who donated funds to the shelter.

4. That time he had to answer the ruff questions Fielding questions from the pawparazzi are a daily occurrence when you’re a well-dressed, jet setting internet celebrity, but the questions our Val Lowitz asked Tuna are nothing to bark at! Tuna didn’t get his fur ruffled and he handled himself like a pro.

Watch the interview below to see how Tuna also answered the unasked question of “How do you handle all of those overly obsessed fans?” With a little help from his mom, Courtney, Tuna wrote a 15-chapter book filled with candid photos from his daily life and words of wisdom about how important it is to remember that beauty comes in all forms and radiates from within.

This behind-the-scenes look at one of the world’s most famous pooches is now available worldwide and Tuna is on a 7 day book tour signing pawtographs for his fans!