History Proves That Even Presidents Are Crazy Dog People

A couple weekends back, after a long battle with lymphoma, former President George W. Bush had to say goodbye to his beloved dog, Miss Beazley.  While Americans have a tough time agreeing on presidents and their policies, one thing is certain: They love their dogs. 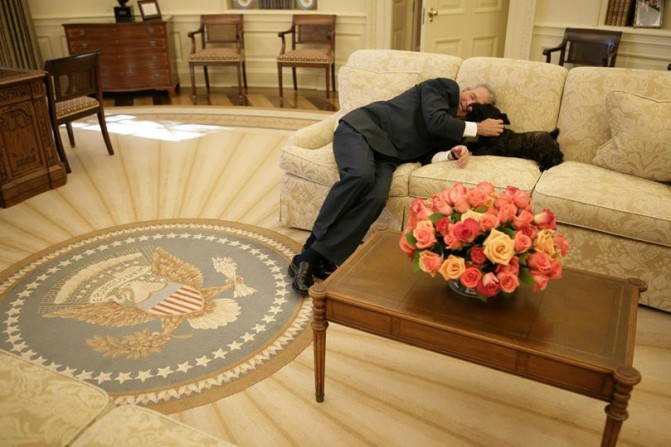 This got us to thinking about other presidents and their favorite pup pals.  Thanks to a great article in Time, we can take a look through history and discover some of the famous presidential dogs.

We begin with George Washington and his American Foxhounds.  Washington famously bred and maintained many dogs, listing over 30 in his journals, including Drunkard, Tipler, and Tipsy. Next up is Abraham Lincoln and his dog Fido.  Fido was Lincoln’s dog in Springfield, Ill., for the five years before he was elected as president.  However, Lincoln didn’t think Fido would survive the journey to Washington, and was forced to leave him in Illinois.  When Lincoln’s body was returned to Springfield, Fido was brought out to meet the mourners. For our third entry, we go to Warren G. Harding and Laddie Boy.  Harding really loved his pooch, and it showed.  He gave the Airedale Terrier his own hand-carved cabinet chair so Laddie Boy could sit in on meetings.  Harding also threw a birthday for Laddie Boy at the White House and invited all the neighborhood dogs to join! Our next president and pup pal is Franklin D. Roosevelt and Fala.  Fala was one of the most iconic first dogs.  The Scottish Terrier starred in a Hollywood film and was named an honorary Army private. Next on our list is John F. Kennedy and his dogs Shannon, Clipper, Charlie and Wolf.  The Kennedy’s loved their dogs, so much so that they built a special play area near the West Wing.  J.F.K. was also the first president to request that his dogs meet him when arrived at the White House in the presidential helicopter. We now move to President Lyndon B. Johnson and his dog, Yuki.  Yuki was found by Johnson’s daughter at a gas station, and became a hit in the Oval Office.  In the photo below, Johnson is showing the U.S. ambassador to Great Britain how Yuki could sing with him. Shifting now to Richard Nixon and his famous dog, Checkers.  The cocker spaniel served as the subject of Nixon’s most famous speech.  Unfortunately, Checkers didn’t make it to the White House because he passed away in 1964.  Nixon later added a poodle named Vicky, a terrier named Pasha, and an Irish setter named King Timahoe. 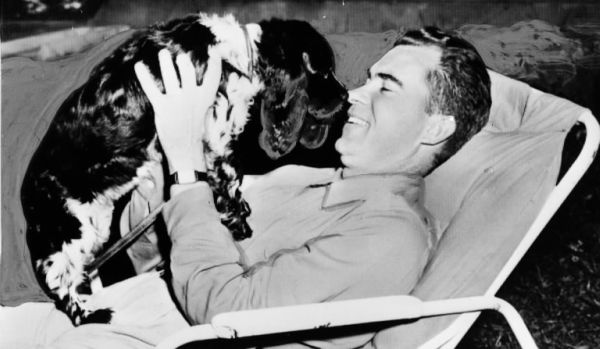 Next up is Gerald Ford and Liberty, his golden retriever.  Rumor has it that Ford had a special signal he used to get Liberty to wag his tail when the President wanted to cut meetings short in the Oval Office. Following Ford is President Ronald Reagan and Lucky. Lucky was a Bouvier des Flandres given to Reagan by the March of Dimes and named after the First Lady’s mother.  Eventually, Lucky had to be moved to Reagan’s California home because, believe it or not, she grew too big for the White House. 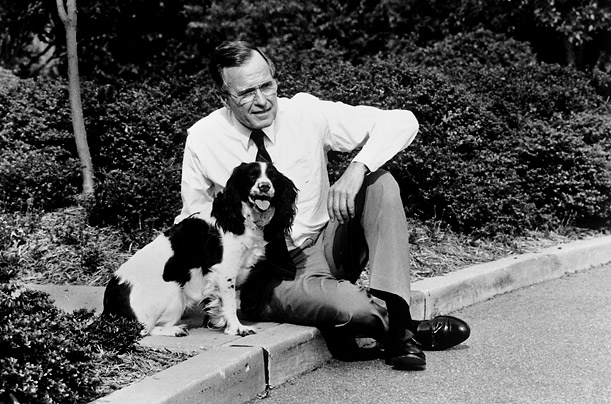 Bill Clinton took thousands of suggestions from the public for the naming of his adopted Labrador Retriever.  He eventually chose the name Buddy for his new presidential pal. George W. Bush owned another high-profile Scottish terrier, named Barney.  Barney was the focus of numerous websites and was even the star of his own Barney Cam movies! The final president and dog on our list is Barack Obama and Bo.  The Portuguese water dog was a gift from Senator Edward Kennedy and his wife.  Obama’s daughters named the dog Bo because they had cousins with a cat of the same name and because Mrs. Obama’s father was nicknamed Diddley, after famous bluesman Bo Diddley. to Time.
Featured image via TheHill