Home » Fun » Gather ‘Round for the True Story of Greyfriars Bobby

Gather ‘Round for the True Story of Greyfriars Bobby

One of the most famous dogs in Scottish history - maybe THE most famous dog in Scottish history - has to be Greyfriars Bobby. His story is one of pure devotion. There are many different versions of Bobby's story, as it has been passed down from generation to generation, and Disney even made their own feature-length film about the devoted little terrier. There is, however, one story that is most commonly accepted, and it goes a little something like this: John Gray was the youngest of three siblings born in 1814 in Forfar, Scotland. After marrying, John followed in his father's footsteps and became a gardner, but work was hard to find. The family decided to move to the larger city of Edinburgh and John took a job as a night watchmen. John was obliged to have a watchdog with him and chose a six month old a Skye terrier, who he aptly named Bobby. Bobby was loyal to his new family and accompanied John on his evening rounds to make sure the city was safe. The pair were inseparable and well-loved by locals until John's death in February of 1858. John was buried in Greyfriars Kirkyard (churchyard), and wee Bobby was present at the funeral. 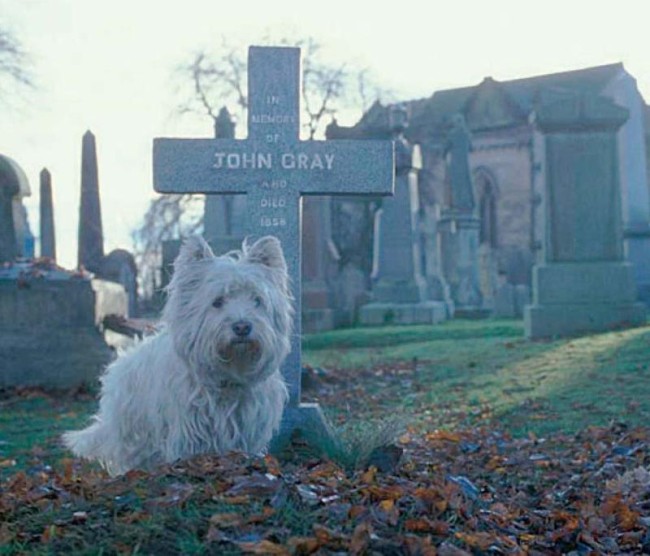 Image via GeoPixPic
The grave was filled with earth and everyone headed home, but the next morning, the Kirkyard keeper found Bobby lying on top of his master's grave. He was chased away, as dogs were not permitted in the churchyard, but the next morning as the gates opened Bobby was waiting to be close to his master once again. After a few days the weather took a turn for the worst yet Bobby still turned up every morning and wouldn't come inside, all he wanted to do was sit at John's grave. Everyday for the next 14 years, until his own death, in 1972, Bobby could been seen in the churchyard. People across Scotland mourned his death, as his devotion made him many a friend and somewhat of a tourist attraction. Image via The British Newspaper Archive
In fact, he's still a huge tourist attraction - nowadays, it's seen as good luck to rub the statue's nose! Although this is the most commonly known story the exact details of the Greyfriars Bobby story have been lost over time. What we do know and love about this story is that this pup is an everlasting tribute to affection between dogs and dog parents everywhere!