Hope For Paws is a non-profit animal rescue organization based out of Los Angeles, CA. Earlier this month they rescued a beautiful brown puppy named Kayla from Mexico. Despite the torture inflicted on this innocent pooch at the hands of a human, she remains sweet, trusting and open. Her capacity for love and forgiveness is perhaps the most gut wrenching part of this story- who could harm an animal whose only crime was searching for love and acceptance?

We’ve written about a lot of heartbreaking rescue stories, but we’ve never seen anything like this. Someone had poked Kayla’s eye out and cut off half of her leg. The photos of her before medical treatment are incredibly graphic, so we won’t show them here. But you can see them on the Hope for Paws flickr.

Besides her horrific physical wounds, the pup also had Ehrlichia, a very severe tick borne disease, as well as several other parasites. She is going to need an extensive amount of care before she fully recovers. Although doctors originally put what remained of Kayla’s leg in a cast, they eventually had to amputate her entire limb. They also had to fully remove one of her eyes. Despite all of this trauma, you can still see her loving spirit shine through. 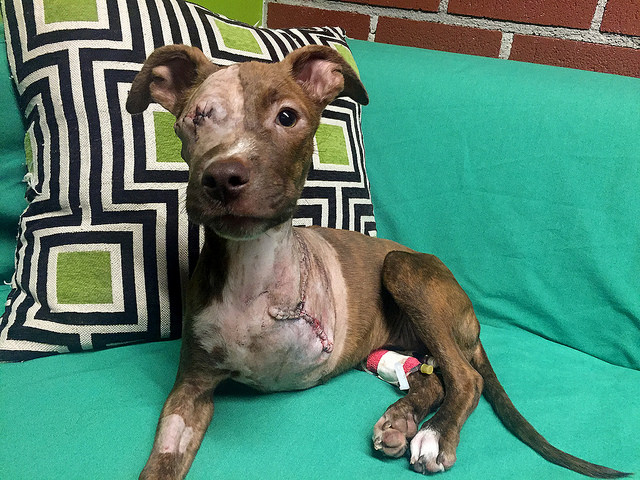 The man behind Hope for Paws, Eldad Hagar, says that Kayla is a tough girl and is handling everything that happened to her with incredible resilience. Right now, her favorite things are rolling over for belly rubs, giving kisses and wagging her tail. We are so glad this beautiful girl is safe and in a loving environment where no one will ever hurt her again.

Featured image via Hope for Paws