Mike LaPolice’s dog, Ivy, is special. She goes out of her way to care for people and bring them joy. In that way, she’s not much different than LaPolice himself, a housekeeper at the University of Rhode Island’s Peck Hall.

Eliza Radeka, a reporter for the URI’s student newspaper The Good 5 Cent Cigar, wrote about the positive impact Ivy and LaPolice have on the university’s residents.

“How could I possibly stay focused on such negativity in my life with that beautiful, loving dog looking right up at me?”

Despite the joy that Ivy brings to students, URI’s administration finds the dog’s presence unprofessional. LaPolice is no longer permitted to bring her to work. While the newspaper article may have highlighted Ivy’s presence on campus, the administration’s issues with her are not new. In a followup article, Radeka reports,

“He has faced these problems since the first day he brought Ivy to Peck, and has been fighting for her ever since. Last year, in an effort to keep Ivy at work with him, he made her a registered therapy dog with the National Service Animal Registry.”

However, the National Service Animal Registry (NSARCO) and others like it have no legal standing and are in no way affiliated with the government, nor do these registries offer the required therapy dog training. According to Therapy Dogs, Inc., dogs must go through hours of supervised training and tests prior to receiving their certification.

Based on the The Good 5 Cent Cigar’s article, it’s unclear whether or not Ivy and LaPolice went through any type of training before he brought her to URI’s campus. LaPolice could not be reached for comment. 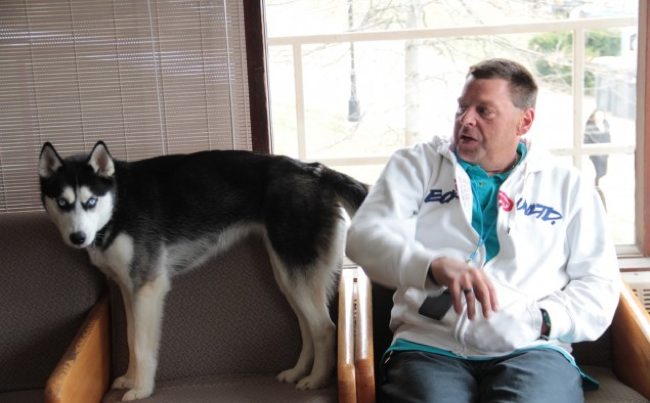 According to the university’s official statement, LaPolice has made no requests for accommodations under federal law. The statement goes on to say,

“While we understand the bond students may have formed with an animal brought into their residence hall, the University must consider the precedent that this sets and the welfare of the entire community, including potential liability in the event of a dog bite and issues around sanitation, pests and allergies.”

There is no dispute that Ivy brought a great deal of happiness to the residence of Peck Hall, and she will continue to bring joy to LaPolice and everyone who interacts with her.