When the founder of an organization focused on pairing service dogs with PTSD sufferers told Mike Gervell a dog would make him smile again, the Vietnam veteran said, “Yeah, good luck with that.”

At the age of 20, the Anchorage man had already served two tours of duty in the Vietnam War. Since returning home in 1970, he has led a mostly solitary life. “My whole life I never needed nothing,” he said. “Depended on myself pretty much.” That is, until he met Mike, a tiny Border Collie and Short-haired Terrier mix whose name was, coincidentally, also Mike. Faced with many health problems related to his service in the military, Gervell definitely acted like someone who’d been alone for a long time. “He was always very gruff on the phone,” said April Gettys, founder of Midnight Sun Service Dogs. “It was almost like we were intruding on his life, even though he came to us.” Since being matched with his four-legged best friend by Midnight Sun Service Dogs, Gervell, who had never had a dog in his life, now fully enjoys the perks of having a pup by his side all the time. “[He] carries himself differently now. He chuckles and chats and buys Mikey little treats and fancy collars. He jokes,” said Gettys. 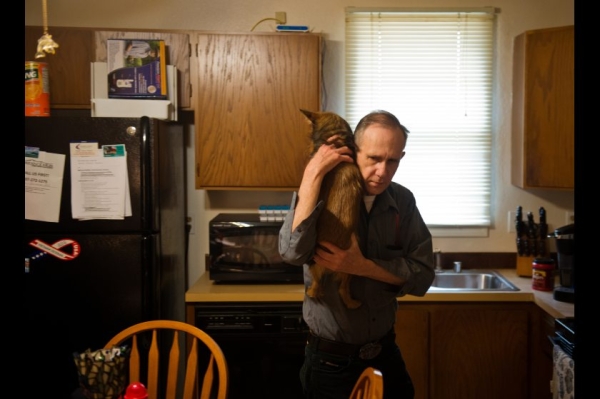 Now that Gervell lets Mikey sleep in bed with him, the pup is there to lend a furry paw of support when his owner has a nightmare about his time in the military. Gervell says that, after one particularly frightening episode, he woke up to find little Mikey watching over him, the cone from his recent neutering pressing against Gervell’s face. “He was there, watching me,” he said. “Making sure it’s not going to happen again.”

h/t to and featured image via Alaska Dispatch News