Can you conceptualize the life of a chained dog? As a Humane Agent in rural Ohio, it's a topic I'm all too familiar with. I have taken literally hundreds of dogs off of chains and transported them in my own car to a hospital or shelter, and then to my own house for rehabilitation. And when it comes to behavior problems, the quality of life of a dog, and community safety and bite risks, the chained dog is always at the top of the list when it comes to red flags. Out of all of the unintentional (and usually legal, depending upon where you live) ways to mess up a dog, chaining them up and leaving them on that chain is at the top of the list.  This is what it's like to live your life as a chained dog: A social creature, you desperately crave attention. But your entire existence consists of nothing more than circling a dirt pit around a pole in the ground by yourself, the grass long worn down by your constant, anxious pacing. [caption id="attachment_122533" align="alignnone" width="640"] Thor, an ACT Ohio Rural Rescue[/caption] The seasons change; good weather turns to bad weather as you peer out from a small box you call home. Winter comes, and it's so cold that entire days will go by before you so much as move out of that box. Winter turns to spring and your dirt pit turns into a mud pit with the coming rain. Spring brings warmer weather, and more to see finally! Every person, dog, cat and kid that walks by might be the one to spend time with you, or take you off that chain, but they just look at you, either scared or sad, and keep walking. So you rush to meet them, only to be abruptly halted by the chains, violently throwing you backwards by your neck. You yell for attention, not realizing your bark just makes people more afraid of you. Nobody stops by. The days turn into weeks, the weeks turn into months, the months turn into years. [caption id="attachment_122538" align="alignnone" width="640"] Marshall, an ACT Ohio Rural Rescue[/caption] Your anxiety builds daily, except for that one brief moment every day when you see the people you love. Here they come, your tail wags so hard with excitement that your whole back end is wiggling. Maybe this is the day they'll play with you. They fill your food and water bowls up, and walk back inside the house without so much as a pat on the head. Why? Why do they even have me, you wonder? [caption id="attachment_122539" align="alignnone" width="640"] Gabby and Sophie, ACT Ohio Rural Rescues[/caption] Your nose can smell wonderful things coming from inside the house, you can see and hear interesting noises coming from the people you love while you peer out of your little box at the edge of a dirt pit, attached to a heavy chain and a pole in the ground. And this is your life, until you die or until someone takes you away. [caption id="attachment_122536" align="alignnone" width="640"] Marshall, an ACT Ohio Rural Rescue[/caption] Dogs have a lot of amazing qualities. They are loyal and loving and devoted and for thousands of years we have enjoyed a mutually beneficial relationship where the quality of life for both dog and owner were increased. If there's one quality I admire the most about our canine companions though, after years of rescuing them from the worst situations and living conditions possible, it's their resiliency and their ability to forgive. [caption id="attachment_122532" align="alignnone" width="640"] Gunner, an ACT Ohio Rural Rescue[/caption] Every year, I personally rescue hundreds of dogs that are chained up and suffering. Since it's legal in most of the parts of the State where I work, before I can take the dog, I have to convince the owner that I can provide the dog a better life than the chained up life it currently has. Once the dog is off the chain and vetted (at my cost usually), they come to my house for rehabilitation and integration into a multi-dog lifestyle. I'm blessed with the opportunity to not only rescue each dog with my own two hands, but to also teach that dog how to be a dog again, and then find them a forever home. [caption id="attachment_122540" align="alignnone" width="640"] Thor, the dog from the first picture at the top of this story at my house after his rescue.[/caption] [caption id="attachment_122541" align="alignnone" width="528"] Thor with a couple of the residents at my house, integrating and learning how to be a dog for the first time ever![/caption] [caption id="attachment_122542" align="alignnone" width="640"] 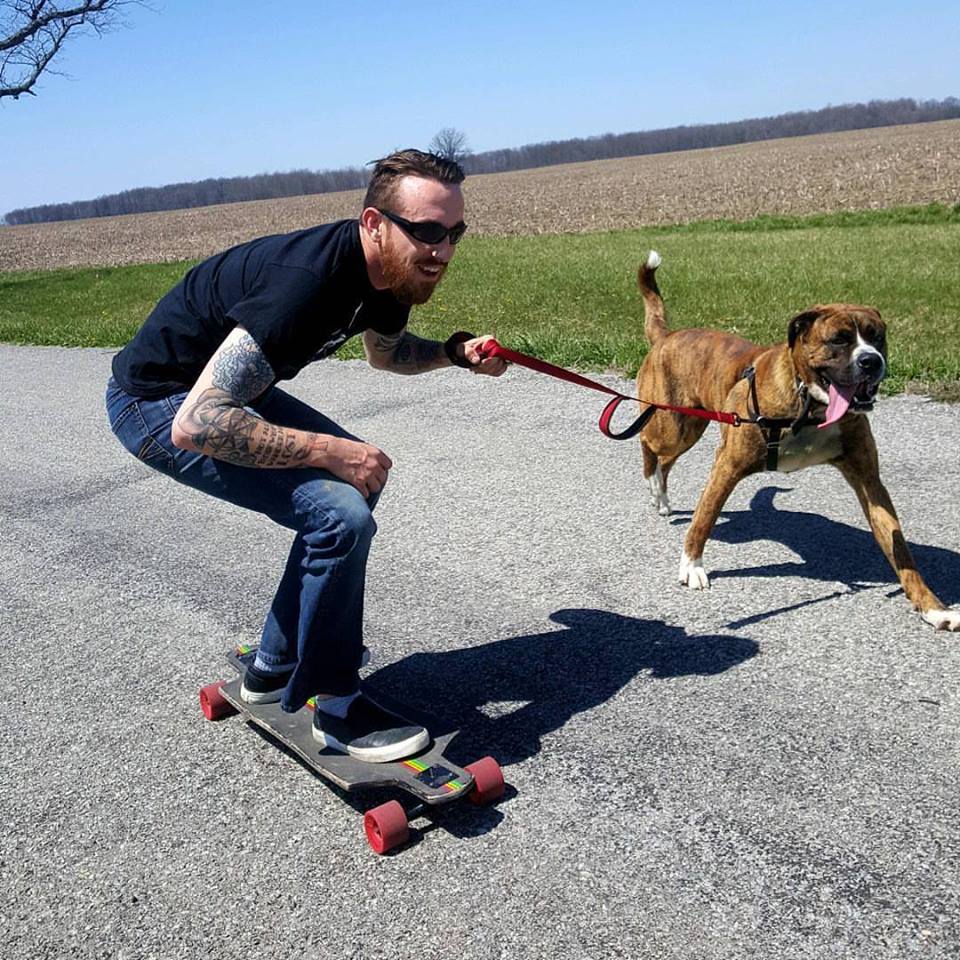 After some time at my house in rehab, Thor finally found his forever home, with a Great Dane named Loki! (I hope all Marvel fans can appreciate how these two have become best friends, despite the odds)[/caption] The laws vary based on where you live and whether or not a dog can be tethered. If you care about the well-being of the companion animals in your neighborhood, here is a list of the laws by State according to the Animal Legal and Historical Center. If you've read this article and it tugged at your heart-strings, congratulations, you're a decent human being. If you've read this article and you think I'm a tree-hugging animal activist, I have a pair of chains you can wear for a while, and then we can talk.... Steffen Baldwin is the Founder, President and CEO of the Animal Cruelty Task Force of Ohio, the Chief Humane Agent for Union County, Ohio and the Owner of SAVE THEM Dog Training, LLC.