Home » Fun » If Night Noises Wake Your Dog Every Night, White Noise Might Be The Answer

If Night Noises Wake Your Dog Every Night, White Noise Might Be The Answer

The night can be full of distracting and oftentimes stress-inducing sounds, such as revved car engines and honking horns, partying neighbors, and the blaring echo of emergency sirens. Any of these little things might startle your pup awake. Barking awake. Your dog’s sense of hearing, like our own, is still active during sleep and has evolved to function as a sort of alarm system that is alerted by any sudden or inconsistent changes in sound. This is why an unexpected noise, such as a car door slamming shut, startles your pup into a late-night barking frenzy. Since white noise has been known to help people sleep better, what about your dog?

Tracey Schowalter, a pet-training consultant at Puppy Adept in Gainesville, Georgia, told Reader’s Digest, “You may not need a white noise machine, but your dog might.”

A lot of dogs are very sensitive to noises outside, like other dogs barking or neighbors coming home late. A white noise machine or fan will drown out the noises that are keeping your pet up, which will keep your pet from waking you.” If your pet typically has very extreme, negative reactions to outside noises, you may have to desensitize him or her to the sounds that they find frightening. But sound-masking with white noise can be a useful behavior management technique in the meantime. 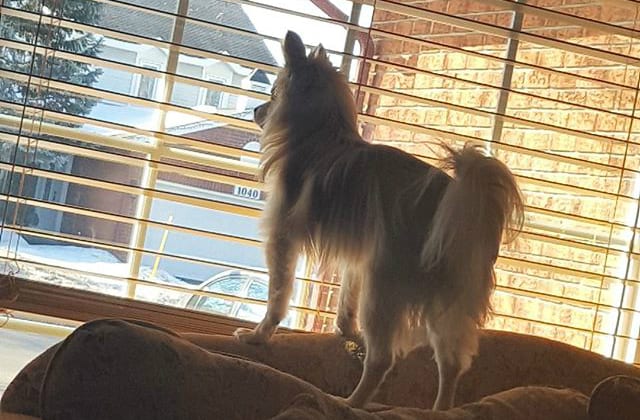 If you turn on your chosen noise generator where the dog is sleeping, the sound may help mask whatever is going on outside that is causing your dog, and consequently you, to wake continuously through the night. This process will not change the dog’s emotional response to noise triggers, but it will keep them calm by limiting their exposure to the sounds that disturb them. In Manual of Clinical Behavioral Medicine for Dogs and Cats, Karen L. Overall describes how, in situations involving highly reactive dogs, “Avoidance of the noises that trigger the responses are key.” Putting your dog in a quieter room and playing soothing white noise may prove to be effective anti-bark control and keep the both of you at ease. There are also CDs designed to help soothe reactive pups on the market such as the popular Through A Dog’s Ear. These music therapy CDs may be better suited to treating dog anxiety, however, as music is not as effective as white noise for masking sounds. More research is needed to conclude whether or not white noise actually has positive effects on animal behavior. But if it helps us humans, it might be worth giving it a shot.

Has white noise helped calm your pet? Let us know in the comments!