10 Times Working Dogs Were The Most Popular Kids In School

Many people rely on service dogs as lifelines and view them as their personal four-legged heroes. According to the University of Arizona, 0.9% of people with disabilities are paired with service dogs. The bond these service dog teams share is one of loyalty and dedication. Some schools are recognizing this by putting pictures of service dogs in yearbooks, right next to their humans. Sometimes, therapy dogs made the grade, as well.

These schools didn’t have to do this, but they recognized that these pups are a part of the school experience and worthy of being remembered alongside everyone else.

1. Seph is a 14 year old boy attending Good Hope Middle School in Louisiana who has muscular dystrophy which is a disorder that caues weak muscles.  Presley is his service dog who is not only his best friend but also helps stabilize him when he feels weak. 2. Rachel suffers from epileptic seizures and has to have Taxi by her side at all times to help predict her next seizure. Surprisingly Taxi flunked out of guide dog school due to his fondness of chasing cats, and started his next chapter as a seizure alert dog. 3. Rebecca Thomas is a high school teacher at Blaine High School in Minnesota. She is hearing impaired and teaches American Sign Language. She has been bringing her service dog, Caramel, to school with her everyday for the past ten years. 4. Vicky Camacho is also a teacher at Blaine High School, teaching Special Education. Her service dog, Dakota, comes with her once a week and helps her teach her students. 5. Although not a service dog, Prince earned his place in the 2013 yearbook of Portage High School for his work as a therapy dog. His owner, Tim Kunstek, works in the guidance department of the high school and Prince helped to comfort students before his retirement at the age of 9. 6. According to Hannah Hulse, who posted this picture on Twitter, her cousin Kaleigh Buckminster has celiac disease and takes her service dog, Memphis, to school with her everyday. 7. Grady helps assist his human Andriana, who has autism, everyday. 8. In 2010, Harry was diagnosed with type 1 Diabetes and Taffy became a vital necessity for him. Taffy is there to alert him when his sugar starts to drop so he can take his medicine and avoid going into shock. 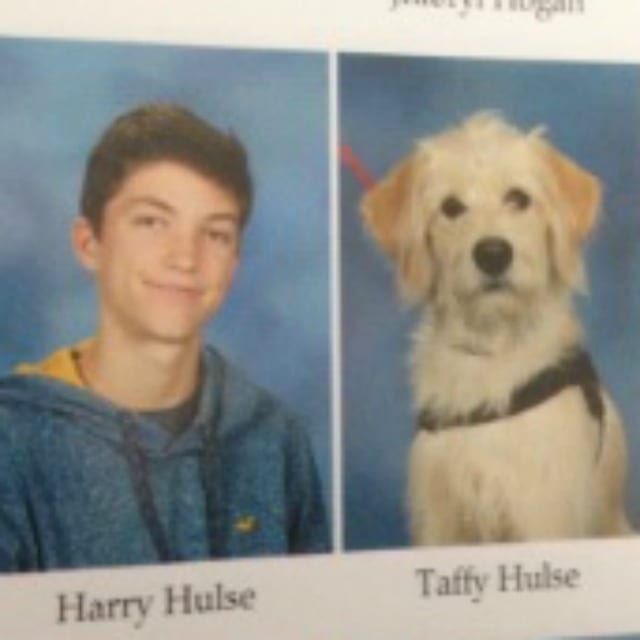 9. Diaz Benitz Arturo and his guide dog Idena were included in their university’s yearbook. 10. Kaylor helps his human Isaac get through his daily battle with fear and anxiety.