The Surprising Relationship Between Your Dog’s Anxiety And Your Clothes

Does it ever seem like some days your dog has a completely different personality? One day they’re your best friend, the next they’re acting all distant and weird? If this happens, don’t take it personally. It might just be your clothes. As it turns out, certain color patterns serve as a warning to your dog of potentially negative outcomes. The scientific term for this color warning system in animals is called “aposematism”, and is used defensively by prey animals to warn off predicators. Most often, their coloring indicates they have defenses in the form of poison or a bad taste. The scientific community is divided as to how the knowledge of these warning systems is spread, but there seem to be two basic camps.

The first theory is that animals learn them after a negative experience, such as eating something and getting sick, and then avoid prey with that coloring from then on. The second theory is that these color-specific warning systems are instinctive and coded into an animal’s genes. Whether or not they’ve ever experienced a negative outcome associated with a specific color pattern, animals will instinctively avoid it. One of the most common aposematic warning systems involves high contrast stripes. You’re likely familiar with a few animals that use these warning systems, such as snakes and caterpillars. The coral snake is highly recognizable by their admittedly beautiful red, black, and yellow stripes. However, these snakes are highly poisonous and use their coloring as a warning system. A second animal is the cinnabar moth caterpillar, whose bright yellow and black stripes indicate that they have a foul taste that can cause nausea. This makes sense for wild animals, who may run into snakes and other creatures on a daily basis, but what about your dog? Depending where you live, the scariest thing your dog might run into is probably a skunk. Dr. Chamove, a researcher at Massey University of New Zealand, wanted to see if our domesticated friends had maintained their awareness of animal warning systems. To see if domesticated dogs have retained this instinctual reaction to aposematic warning systems, he conducted a two-part study. For the first portion of the study, 22 shelter dogs were tested. Dr. Chamoe had a study male participant walk by their cages dressed all in black except for a long sleeve shirt, which had one of five distinct patterns. The shirts had alternating narrow black and white stripes (either horizontally or vertically placed), wide stripes, unequally spaced stripes, or no stripes at all. The dogs were videotaped to record their responses to each of the shirts. The shirts with the horizontal stripes did result in a slightly higher level of activity in the dogs, but the difference between horizontal and vertical stripes was minimal. What’s interesting, though, is the specific behavior that the dog’s displayed. When faced with the striped shirts, the major emotion the dogs displayed with submission. The behavior suggested that they were spooked by the shirts, and felt uncomfortable or anxious around them. Pretty much how they would act if they encountered an animal with this pattern in the wild. The second part of this study focused on trying to verify the results from the first test. For this portion, 10 shelter dogs and 15 dogs from Massey University’s breed unit were tested. This time, the number of shirts was also reduced, using only black and white narrow stripes, black and white spots, and solid colors, and a female walked by the cages instead of a male.

Despite these changes, the results of the second study were similar to the first: narrow stripes caused the most activity and solid color caused the least. If the results of these studies teach us anything, it’s that dogs have a keen eye when it comes to fashion. It turns out our four legged friends aren’t very good at hiding their feelings if they don’t like what we’re wearing. 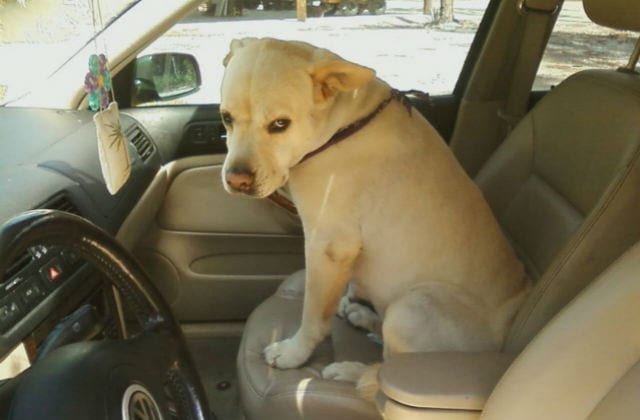 So next time you notice your dog acting strangely, take a quick look at your outfit in the mirror. It might just be that striped shirt you have on that has your dog worried they are about to be attacked by a snake.