Home » Health » My Dog Is Biting: How Do I Get Them To Stop?

My Dog Is Biting: How Do I Get Them To Stop?

***Looking for a gift to keep your pup stocked in treats for training? Check out BarkBox! Every month BarkBox delivers 2 original toys, designed in-house, 2 full bags of all-natural treats, and a chew. Sign up here and receive a free extra toy every month. <– This deal is worth up to $120 in value if you sign up for a 12-month subscription! 🙂

When a dog starts biting, it can be troubling for everyone involved. Normally, due to their incredible capability for love and companionship, dogs provide us with many health and social benefits. But a dog that is increasingly at risk for harming others—or yourself—can cause stress and fear. So how do you stop biting behavior?

As noted by the Centers for Disease Control and Prevention, nearly 1 in 5 people bitten by a dog require medical attention. Dog bites not only can cause pain and injury, they can become infected or even transfer illness. Given that a biting dog can not only hurt others, but potentially be the subject of legal action, it’s vital to address your dog’s unstable behavior immediately.

To begin with, it’s important to identify what’s triggering your dog’s behavior. Here are several common reasons for why dogs bite and how to prevent it: Although any dog can be spooked by a loud noise or sudden movement, dogs that demonstrate chronic fear or insecurity are at a greater risk of biting. Fear often manifests in dogs as cowering, jittery movements, pacing, panting, a lowered or tucked tail, flattened ears, fleeing or attempting to flee the area, hiding, or even shaking. Insecure behavior is similar in appearance but on a lesser scale. Unfortunately, whenever in these unstable states, dogs that are unable to run away from a situation may feel forced to protect themselves instead. Thus, fear or insecurity can result in a “I’m scared, get away from me!” bite.

In order to prevent this type of bite from occurring, it’s important to recognize and respect a dog’s current state of mind. Being a calm and strong leader to your dog is always important, but when rehabilitating a fearful dog, it’s also your job to not let your dog become overstimulated and panic. (If your dog does panic, no worries! Stay calm, quiet and assertive and lead your dog out of the situation.)

It’s also important to never approach your dog quickly or head-on when they feel cornered. Instead, ease your dog’s fears by slowing your movements, facing away from them, avoiding eye contact and loud noises, lowering to their level and encouraging your dog to come to you on their own volition. (Note: A high-reward Dog Treat might lead their noses your way.)

It’s also important to request respect from others, especially children. By asking that people don’t touch or interact with your dog, you’re not only protecting them from a potential bite, you’re protecting your dog from being forced into self-protection mode. Overall, until your dog is more comfortable and stable, it’s best that no one reaches out a hand to give unwanted touch. Although possessive or territorial behavior occurs more often in herding or guard dogs, it can occur in any dog, large or small. A dog that bites due to possessive behavior will snap in order to protect what it sees as their property. This “property” can include humans, houses, yards, food, toys, beds, couches or any other item that they’ve developed ownership over. Like all aggressive behavior in dogs, a bite due to possessive behavior has warning signs. Dogs will “guard” an object, such as a ball, with a tense stance, a lowered head and tail, focused eyes and even bared teeth or a growl. If a child or adult attempts to grab that ball when the dog is in a possessive state, a fast-moving bite can occur.

In order to prevent this bite, it’s important to establish ownership over yourself, your home and your possessions. By teaching your dog that they don’t “own” you, for instance, you won’t negate their instinct or training to protect you against a threat. Instead, you’ll establish a healthier relationship where your dog isn’t mistakenly protecting you against non-threats, such as your own family members or friends.

When in doubt of how to achieve this relaxed, happy, and non-possessive state in your dog, consider working with a reputable dog behavioralist or trainer in your area. In the meantime, protect yourself and others from being bit by recognizing your dog’s warning signs. During feeding time, make sure that no one touches or approaches your dog. Or, if your pup guards or owns a spot on the couch, no longer allow them up onto the furniture until you’ve remedied the behavior. 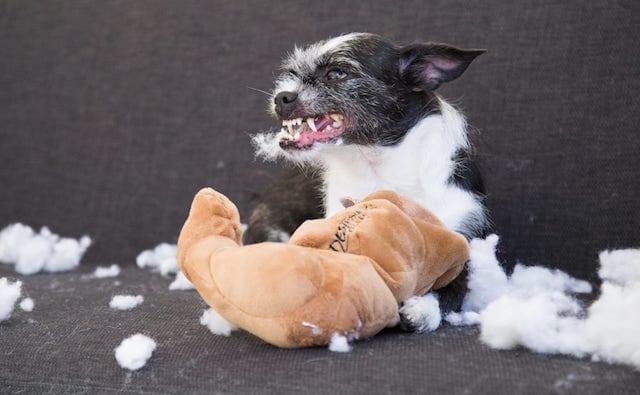 A dog biting due to their prey drive kicking into gear can be scary, especially as there is less time to react. While dogs acting on a prey drive less often bite their own owners, they may attempt to run down and bite others while they’re on a walk or in the yard. A prey drive response looks much different than other reactions: dogs become highly excited with tails up and ears perked, lunging forward and attempting to chase, and possibly whining or barking. Other dogs may lower themselves into a “stalking position” and stare intensely at their intended target.

Whenever confronted, chased or attacked by your excited dog, it’s best to stop moving, face your dog head on and stay as calm, confident, and firm as possible. If knocked down, cover your head and neck with your arms if possible, but do not panic or flail. However, if your dog has locked onto or chased down someone else, it’s impossible to control the actions of others: you must take responsibility for what happens with your dog by reacting assertively and swiftly as possible. The best method for preventing a prey drive reaction from an untrained dog is to keep your dog on a leash and always in your control. This will prevent any potential outbursts while you’re working on training your over-excited pup. While most dog bites occur due to fear, possessiveness or prey drive, pain can cause even the gentlest of dogs to bite. If your dog has a painful condition, such as hip dysplasia, or an injury, such as a broken bone or wound, it’s best for you and others to handle your pup with slow and careful movements. In response to being touched in the wrong place, a dog can instinctually snap. For dogs, it’s a way of saying “that hurts, don’t touch!” Unfortunately, for humans, it can be a sudden and scary experience, possibly resulting in injury.

In order to prevent this type of reaction, a dog suffering from a chronic condition or injury should be treated with the upmost respect. As well, a previously non-aggressive dog who suddenly starts snapping or biting should be immediately examined by your veterinarian. New and unexplained snippiness could be a sign that your dog is sick or in pain. When a dog has puppies, the maternal instinct to protect can cause a bite to occur. If your dog is pregnant or nursing a litter, it’s always best to approach your dog slowly and cautiously, even if she never displayed any reactive behavior before. It’s also important to teach children how to behave around a new mom and her puppies. Handling puppies gently and quietly, or even just watching instead of touching newborns, will not only prevent bites, but ease the stress of your tired dog. Luckily, while a mother protecting a baby can result in aggression, it’s generally easy to prevent this type of behavior by modifying your own.

6 Warning Signs A Dog’s About To Bite
How Do I Find A Trainer For My Dog?
How Do I Train My Dog To Be A Therapy Dog?
Are Board And Train Programs Right For My Dog?