Why Do Dog Toys Squeak?

Your dog loves squeaky toys and you love to give them but why and how do these dog toys actually squeak? We decided to look into the science behind the squeak and also why dogs are attracted to the squeaky noise in the first place. So the next time your dog grabs that toy between their jaws, you’ll not only relish in the fact that they’re happily playing with it but you’ll also know exactly how that squeak came to be.

What Makes A Dog Toy Squeak? 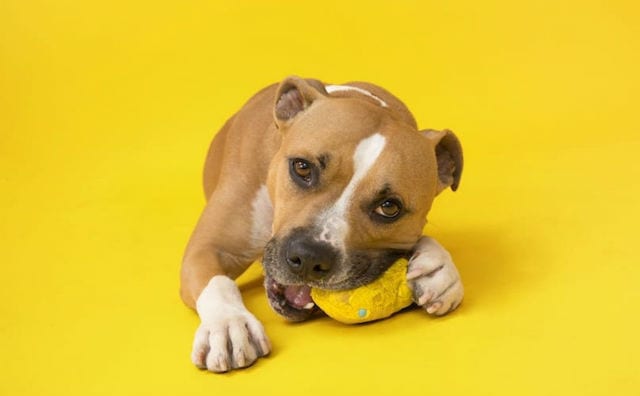 Squeakers are like tiny whistles inside a toy. When your dog chews on – and therefore squeezes – a toy, air is forced through the squeaker making that high-pitched noise that attracts the dog to play with it. Depending on the size of the squeaker, the duration and loudness of the sound will be different.

Also, some toys are designed so that the squeaker makes a sound when the toy is squeezed and also when it regains its shape, basically when the air rushes both out and into the toy. Try out different types of squeaker toys to see which ones your dog prefers.

Why Are Dogs So Obsessed With The Squeaker Sound? A popular theory for why dogs like to play with squeaker toys is that it kicks in their natural killer instinct carried down from their wolf descendants. Ever notice that when your dog plays with a squeaker toy, they sometimes swing their head back and forth as if to break the neck of that cute fuzzy stuffed toy duck? It’s because the squeaker is similar to the sound of injured or frightened prey that signals a wolf to attack and kill. Another theory about a dog’s love of squeaking suggests that dogs learn to love the sound that squeaker toys make. As they bite down and hear the squeak, the pleasure center in their brain lights up. They keep biting on it and playing with it in order to hear that squeak again and again. It’s a form of instant gratification. But just like anything that’s fun and exciting at first, your pup will grow tired of a well-loved toy, so switch it up and provide them with a new toy every so often.

So Where Can I Get Some Squeaky Dog Toys?

Dying to get your hands on some squeaky toys for your pooch? Almost every single BarkShop toy has a squeaker of some kind. See below for our recommendations. These Plush Toys aren’t just cute and cuddling, some of them also have squeakers in them that’ll have your dog playing with them in no time. Choose from multiple options that’ll suit your pup’s personality from food-inspired toys to seasonal toys, even toys that look like funky fish and furry monsters. Ready for a game of tug-of-war with squeaker included? BARK has lots of Tug Toys that have double duty like animals with ropes for arms and a plush body with squeaker inside! When they’re tired of tugging, let the squeaker amuse them. With a Spiky Ball Core that squeaks like nothing else in the world, your dog will love you for getting them the best toy ever! BARK’s Spiky Core Ball Toys come in fun designs sure to inspire any pup to play. Does your dog like squeaker toys on the regular? And do they have a habit of destroying the ones they already have? Then get them a monthly subscription of BarkBox! Every month will include 2 brand new toys with squeakers, as well as 2 delicious bags of treats and a meaty chew. Really, it’s the perfect gift for any squeak-addicted pup.