Written by: Itty Bitty The Griff

Brussels Griffons are quite possibly the most perfect little grump-faced creatures ever to exist. They are distinct, somewhat rare, and are also one of the most searched dog breeds on BarkPost. To aid in your general Griff-ucation, here are a few facts about the breed: Once upon a time, Griffs were used to hunt rats in carriage houses and stables. Then one day this Belgian Queen saw a Griff while getting into her Uber Carriage and was all like, “OMGEE I totes must have that itty bitty dog!” – Voila! The Griff rose to elite pooch status and never had to touch a disgusting rat again. #ClassicRagsToRiches #MostlyTrue #MaybeUrbanLegend #idk

2. Despite that royal blood, they’re still an uncommon breed. Today, Griffs are still somewhat uncommon dogs. This could be why they’re often mistaken for other small breeds. #ComeOnGuys #Please #NotaYorkie #NotAHairyPug Having a Griff is like becoming Brangelina’s bodyguard – suddenly a simple outing becomes a big event. Fending off paparazzi, getting pointed at, whispered about, stopped, and yes, questioned frequently. #OMG #WhatKindOfDogIsThat #ICantEven Or, “Is that the dog from that movie As Good as It Gets?” (Yes – and not to brag, but leave it to a Griff to be the only being on the planet capable of upstaging Jack Nicholson). #JustSayin’ #ShouldveWonAnOscar 5. Griffs come in a variety of shapes, shades, and sizes. 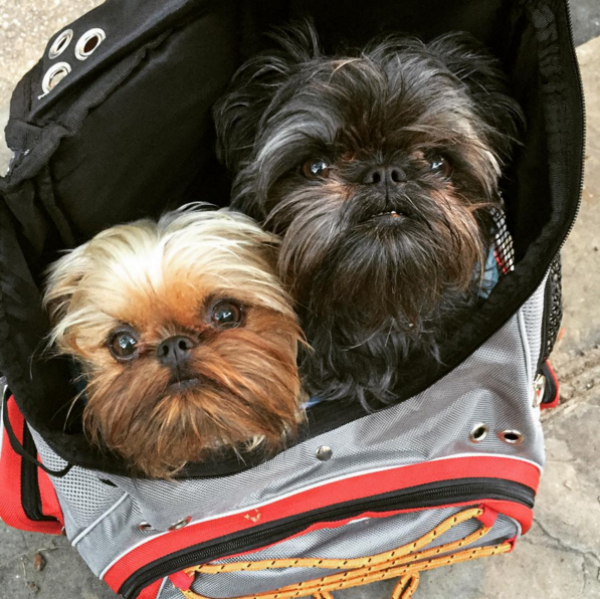 There are both rough-coated and smooth-coated Brussels Griffons (smooths are known as Petit Brabançons). Griffs most commonly have red, beige, black, or black and tan coats, and are usually a compact 7 – 10 pounds. #PerfectForTravel #AndStealthMode Griffs are very, very affectionate and want to be with you…near you… on you…or staring at you AT ALL TIMES. They will follow you to the ends of the ear (or to the bathroom) and you will never sit or sleep alone again. #UltimateVelcro #NoPrivacy Griffs are known for their human-like expressions and mannerisms. One of which is a common condition similar to Resting B*tch Face (“RBF”), known as Resting Griff Face (“RGF”) and it affects even the happiest of Griffs. If it’s paired with a side eye, though, beware: you’ve likely pissed them off. #GrumpFaces

Don’t be fooled by their tiny stature and ability to pull off a variety of fashion-forward looks – Griffs are very sturdy and athletic. Sure, they like to be carried in purses/murses (that’s actually smart and efficient on their parts), but they can also tackle almost anything a bigger dog can. #Walking #Hiking #Swimming #Fetching #Chasing #DogParkRumpusing

10. It’s a truth universally acknowledged that “Griff Chewing” is the.best.thing on the planet. Period.

Griffs won’t be winning any etiquette awards anytime soon, but it’s pretty much accepted that they have the most adorable chewing and chomping sounds ever. #IMean #StopIt #TooCute

11. They are kind of like cats — but obviously better because they’re dogs. Sometimes you just “can’t even” anymore with their cuteness, so pick up the Griff and implement a gentle yet firm “Griffon Hold” – 1) scoop your entire arm under said Griff’s body holding their chest 2) secure tightly. Please note: other Griffs enjoy being held like a baby on your hip, which is perfect at cocktail parties and social gatherings. #SupportTheButt #GripLikeAFootball (See also #HappyHourHold)

13. Griffs have mastered the art of communication.

Griffs are great at listening (not necessarily to be confused with “obeying”). They can also be a bit bossy (translation: they do bark, grunt and huff when they want to convey an important message). #SitDownLetsTalk #LearningFings

14. At the end of the day, they usually just want to lie by your crotch. Yes, you read that right. Griffs love to nap in the gap between your legs and curled up as close as possible to your crotchal region. This way they are 1) safe and 2) alerted if you attempt to bail on your #NetflixAndChill commitments. #LapDogs

Griffs recognize other Griffs and have been known to be “breedists.” They like to play and hang mostly with other Griffons. #IOnlySniffOtherGriffs #HairyNarcissists #BeardAppreciation

16. Griffs are the best kept secret in town and are out there waiting to be loved. Written by: Itty Bitty The Griff