Home » Fun » On My Second Day Working For BarkPost, This Pup’s Picture Completely Changed My Life

On My Second Day Working For BarkPost, This Pup’s Picture Completely Changed My Life

There's been a new addition to my tiny family for the last three weeks. She's small, happy, and sleeps a lot. Her favorite activities are chasing leaves in the wind, getting belly rubs, and playing with stuffed squirrel toys. Her name is Pepper and she's my rescue pup. Let's rewind to the end of June: I start my new position at BarkPost and I'm excited to meet everyone, write about and work with wonderful pups. I'm so thrilled that I can hardly sleep. I wake up too early to deliberate over my first day-of-work-outfit. I finally settled on a Fred Perry polo dress. As I leave for the day, my fiancé wished me good luck and joked: "Try to not to bring a dog home on your first day." Well, I didn't exactly listen. On day two of my new job, I was combing through the writer calendar to review my posts and photo captions for the day. Then, I saw her. She was an Instagram photo of a small black and white puppy that I was assigned to caption for our Facebook posts. I saw her happy, adorable face and clicked on "learn more." Her name was Dalia. I wasn't expecting to see a current picture as most of the pups pics we caption are of dogs with owners or old shelter photos from a few months ago. [caption id="attachment_56448" align="alignnone" width="650"] 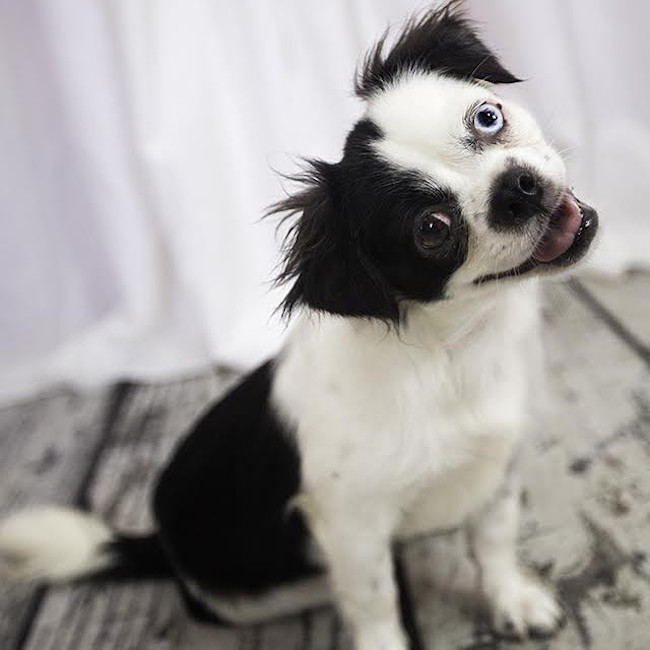 The photo that started it all.[/caption] To my surprise and joy, it was a new photo. And this pup needed a home! I texted my best friend and fiancé her photos. I emailed the rescue network and refreshed my inbox a hundred times in ten minutes. I kept finding myself looking at her photos. I couldn't explain it, but I needed to adopt this dog. Two days later, I got the call. She was still available for adoption and she was currently being fostered in Puerto Rico. My Pekingese, Shih Tzu, and Chihuahua mix pup was found at a few months old, covered in fleas and ticks. There were so many bugs on her that she had bald spots. Though, that didn't stop her from wanting to play. I knew that I was meant to adopt her. I couldn't explain it. I was so compelled by the photos. It sounds crazy, I know: who adopts a dog without meeting it? But for some reason, I knew I was making the right decision. The rescue, Stray From The Heart, was kind, responsive and answered all of my questions, which proved to me that my pup and all their other dogs were being treated with love and care. After a few calls to my landlord, it was official: when the pup came to New York, I could take her home! On Thursday, July 16th, we drove to the airport, my heart pounding. Once there, I was greeted by a sweet, sleepy, and confused little pup, adjusting to a completely new environment after a very long journey. We took her in our arms and Pepper (we renamed her), became part of our forever family. [caption id="attachment_56462" align="alignnone" width="650"] Holding her at the airport for the first time. [/caption] I'm overjoyed and so happy to show this pup all of the awesome things in this world. She loves other dogs, exploring, and getting love and attention. She's calm but curious. I'm thrilled to start a new chapter in my life and have more adventures with this tiny doge by my side! [caption id="attachment_56455" align="alignnone" width="650"] Pepper's first night in Brooklyn.[/caption] She loves the park. We affectionately nicknamed her Pepperoni Pizza. We're pretty sure that our friends and neighbors love her more than us. I'll take that any day of the week. I don't know if I have the shortest track record for staring a job at BarkPost and then adopting the dog. But, I welcome any of my employees to challenge me. 😊 Follow Pepper's Instagram adventures. If you live in the NYC area and are considering adopting a pup, check out rescues like Stray From The Heart on BarkBuddy to find fluffy singles near you!
Featured image via @stephanieasteria and @strayfromtheheart