When you tune in to the annual Puppy Bowl on Animal Planet it may look to the untrained eye like a bunch of rambunctious puppies let loose to frolic their hearts out on a miniature football field. In theory that’s exactly what’s happening, but there is SO much more that goes on behind the scenes in order to pull off this event! 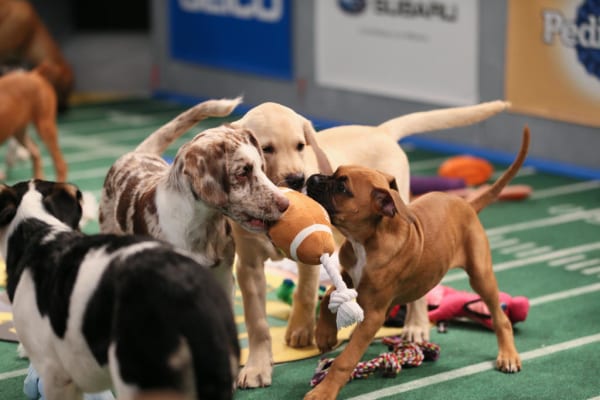 What many people don’t realize is that the Puppy Bowl is actually filmed months in advance and aired during the Super Bowl. Pre-production begins during the summer and the game is shot in October. This goes to show just how much time and effort it takes to produce the event. Even with so much prep, it’s impossible to script exactly what will take place when you have 80 or so puppies, dozens of kittens, and several guest animals all in one place! Every single animal you see on the screen during the Puppy Bowl is available for adoption or has recently been adopted. Animal Planet works with over 40 shelters from all over the U.S. and Puerto Rico to give these pets the exposure they need to find loving homes. 2-3 weeks before taping, staff and volunteers are still scrambling to fill their “puppy rosters” in order to ensure that as many rescues as possible get their chance to be seen. Since it first aired in February 2005, the Puppy Bowl has helped over 600 animals find their furever homes. 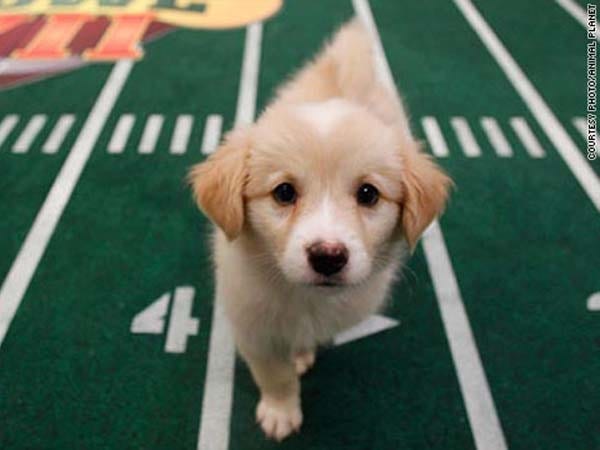 On the day of the event, the safety and well being of each and every animal whose paws, claws or hoofs touch the field is top priority. As soon as they arrive at the studio, interns and volunteers whisk each puppy off to be examined by a veterinarian. An animal safety representative from the American Humane Association is present at all times to oversee the shenanigans and ensure that all of the animals – puppies, kittens, goats, hamsters, silky chickens, etc. – are comfortable and stress-free. Puppy Bowl Stadium requires several days and dozens of workers to construct. The set is actually much smaller than it appears on screen. Camera crews use trick shots to give you the feel of a real football field. Last year, Puppy Bowl XI introduced the first ever hamster blimp to the game. Using green screen technology the talented producers at Animal Planet were able to make it appear as if the blimp were actually flying over the field (manned by hamsters of course). Each year the event grows bigger and more elaborate, from the Kitty Halftime Show to the guest cheerleaders (last year’s goats were a huge hit!) You’ll have to tune in this Sunday February 7 at 3 P.M. in order to see what they have in store for us with Puppy Bowl XII. Don’t forget to check out the “Starting Lineup” of adoptable pets and all of the fabulous pre-game footage at animalplanet.com/tv-shows/puppy-bowl.