Bulldog Undergoes 10 Step Makeover For NYFW To Save Other Pups

Meet Frank. He’s a Bulldog. In his spare time he tears toy frogs to shreads and sprinkles our pawfice with love and farts. He is the last dog you would expect to find in a fashion show. To give you an idea, this is generally how he spends his days:

However, we at BarkPost thought he’d be the perfect runway star for the 1Hotels NYFW event they threw with Coach for their Coach Pup Line! Because stereotypical models are soooo 2014.

How did we turn this rough and ready pup into a runway diva? With a little love, play, and a lot of air freshener (like we said, he farts a lot. He’s a Bulldog. It’s what they do), we did it in 10 easy steps! 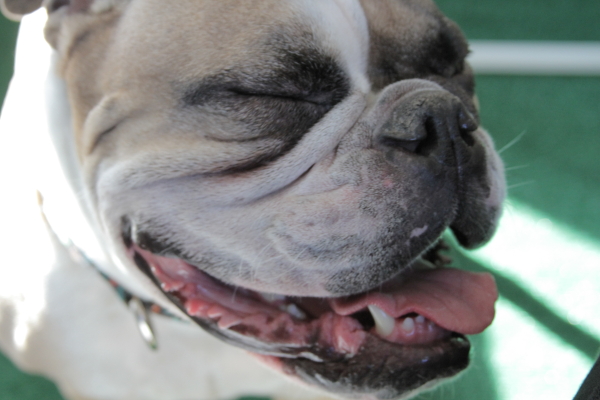 2. But then we made him a pawffer he couldn’t refuse.

After we told him 20% of all Coach sales would go to a dog rescue foundation, he was all, “We in there!” (It’s also pawsible we told him there would be food…). Part 1: Lose all that water weight.

Part 2: Well, it’s #2 so I think you know where I’m going with this. We gave Frank his privacy with that part.

4. Next, we talked about carbs.

The conversation ended with us figuring hey, carbs are the new quinoa so goodbye gluten-free!

Gotta get in shape for the spotlight!

He was a natural at this.

We wanted to exfoliate, but we were really getting crunched for time, so instead we just made sure everything was silky smooth.

8. Followed by a relaxing massage.

You can’t be looking tense on the runway. So a gentle neck massage did the trick!

Let’s be honest: That mug is gorgeous all on its own! He didn’t need anything but the moneymaker he was born with.

10. Accessories. (If you’re a hooman model this should be done way earlier in the listicle)

Everyone knows they make or break the outfit.

Finally, he was ready and he tore that runway up like he owned the place!

Ok, he also might have left a few scratch marks, but hey, who cares? It was all for a good cause!

It was a fairly fabulous night! But now we have to tell him no, he’s not the next host of America’s Next Top Pawdel. Tyra Banks (the Bichon next store) already has dibs. 😉