We know that dogs have incredible senses of smell. Our society is rich with uses for an elite detector dog: a dog that can sniff out explosives, or contraband, or even cancer. And yet, we know startlingly little about just how a dog’s sense of smell works. How do we identify which dogs have truly elite scents-ability?

As it turns out, researchers at Auburn University are making incredible strides on this question. And best of all, their methods are groundbreakingly humane. The researchers have launched a two-year project, “Functional Imaging for Developing Outstanding Service Dogs.” The project is a collaboration between Auburn’s Veterinary and Psychology departments, using forty dogs provided and trained by the ik9 company, and funded with a $1 million grant from DARPA. Their mission: use MRI scans to map the brains of potential detector dogs. They hope to identify specific connections between the dog’s brain activity and their sense of smell. And the dogs, using a brand new training method developed by the Auburn College Of Veterinary Medicine, are awake and at ease during the scan. “The dogs are not restrained in any way,” said Paul Waggoner, co- director of Canine Performance Sciences in the veterinary college. “We trained them to get up on the scanner; place their head in the correct position; and then remain still while the scanning occurs. We’re really the first ones to have dogs scanned in this awake fashion. Previously dogs had to be scanned while anesthetized.” During the MRI scan, researchers give the dog different, specific odors to smell. The hope is that they can identify the exact spot on the dog’s brain that reacts to each smell. “This lets us see their brains in action when they are smelling odors,” said Assistant Professor Gopikrishna “Gopi” Deshpande of Auburn’s Department of Electrical and Computer Engineering. 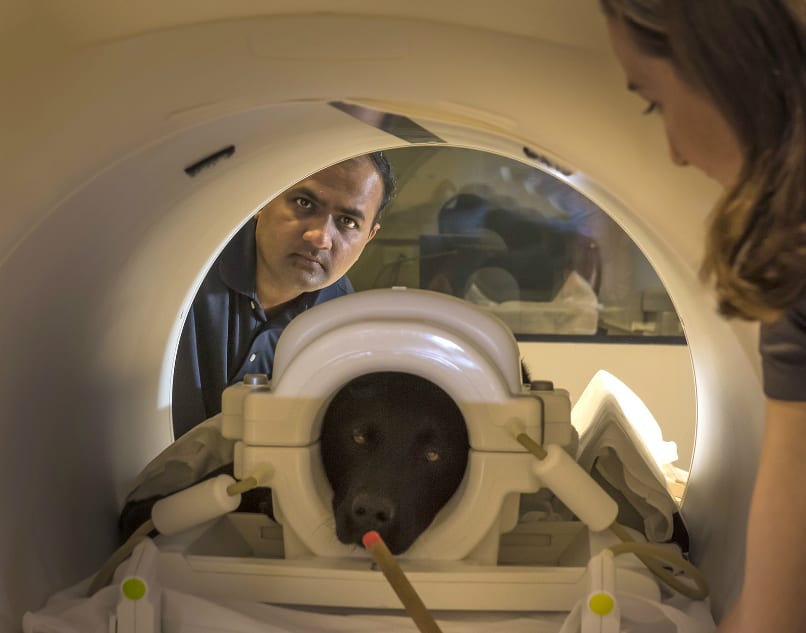 Slowly but surely, the research could create a road map, or an ‘answer key,’ for tests to give potential detector dogs. In the future, a dog who’s brain doesn’t quite light up to certain scents could be dropped from expensive detector dog training, and resources could be focused on dogs with more potential. In between scans, the dogs undergo four to six weeks of detector dog training. When the dogs return for fresh scans, researchers can find out how the training changes their MRI results. This also helps the researchers know which crucial features don’t react to training, so that they have a stronger sense of which slow-starting dogs might eventually become star detectors- and which are better off as household pets. The cost of training a highly specialized detector dog can run up to $30,000. Deshpande hopes that this research will make it easier to identify dogs that can be groomed for detector work, without training and resources wasted on dogs that just don’t have the nose for it. “Auburn is known around the world for its canine programs,” Deshpande said. “We have an excellent team working on this project.”