In 2010, Kacy VanderHorst went to Labs of Love, an organization that rescues sick, abandoned, and otherwise unwanted Labrador Retrievers. It was there that Kacy met Bernie and fell instantly in love with the friendly, chocolate Lab. Bernie was a stray from Kentucky, and Kacy knew right away that she was the perfect dog for her. She said, “It was a nice balance of an active lifestyle and the sweet pup she was.” Kacy took Bernie home, and the two of them have been best friends ever since. Kacy was devastated when Bernie was diagnosed with an aggressive form of cancer two weeks ago. Bernie had begun acting sluggish and unlike her usual self, so Kacy brought her to the vet. The vet diagnosed nine year old Bernie with hemangiosarcoma. The pup has an estimated 2-3 months to live. Kacy is heartbroken to lose her friend so soon, but instead of wasting time on sadness, she has decided to make the most out of her remaining days with Bernie.

“You’re always going to deal with tough obstacles, but it’s all about how you react. You can either sit around and be sad or go out and experience life. That’s when the bucket list was born.” Kacy has compiled a list, specifically for Bernie, for the two of them to complete before their last goodbye. Kacy made a call to action on her Facebook page:

“[Bernie] is taking ideas for her bucket list now….I crossed off guitar lessons (no thumbs) and sky diving (scared of heights). She is looking forward to some fine dining (McDonald’s breakfast), lake swims, road trips, and time with her family and friends.”

Kacy and Bernie have already checked off a few of their activities.

Here they are after an epic, pet store shopping spree: Sharing a cone on a summer night: Nachos are usually the best thing on any list, but in this case the most exciting part of Bernie’s Bucket List is probably the donation going to Labs of Love, where Kacy and Bernie’s adventure together all began. There is no way to know for certain how much time Bernie has left, but one thing is for sure, Kacy and Bernie are going to have the most epic, fun, and wagnificent Dog Days of Summer any pup or hooman could ever hope for. 🙂 Have fun, Kacy and Bernie! We can’t wait to hear more about your adventure together. 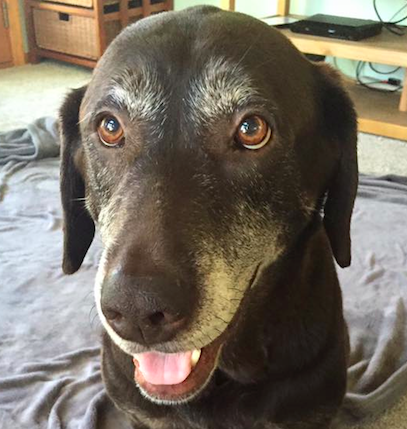 Kacy started a GoFundMe page called Bernie’s Legacy to help other Labs in need. The fundraiser has raised over $1,300, but still needs more donations to meet its goal.