Home » Health » Why Do Dogs Nuzzle? 5 Things Your Dog Is Trying To Tell You When They Rub Their Nose Against You

There are few things better than the feeling of a dog nuzzling up against you. And until dogs figure out how to maneuver those ridiculous little arms, nuzzling is like a pawesome head hug from your best buddy!

However, looking a little closer, and taking a step back from the irresistible urge to anthropomorphize our pets for a moment…

…we find that when it comes to our dog’s nuzzles, oftentimes there is more than meets the nose. Those little prodding puppy nudges can have a pawful of different meanings.

Dog’s are very social animals. And as all dog owner’s know when coming home to their pup, dog’s are big on greetings. Nuzzling is just one of the sweetest ways they like to say, “Good to see ya!”

Excessive nudging, that mimics prodding, can be a dog expressing dominance over another dog, or even a person. When a dog rubs his face around another dog’s muzzle, almost like a face massage with a few licks thrown in there, that’s a dog’s way of giving respect to another dog, or showing submission. Sort of like they’re saying, “Hey we’re cool. I’m no threat, pal.” Let’s be honest… subtlety has never been known as a dog’s strong suit.

This last one may seem like the most obvious, a dog wanting food!? You don’t say! However, a study done at the Institute of Zoology at the University of Zurich, proves that our dogs “need for feed” is more sophisticated than we realized. 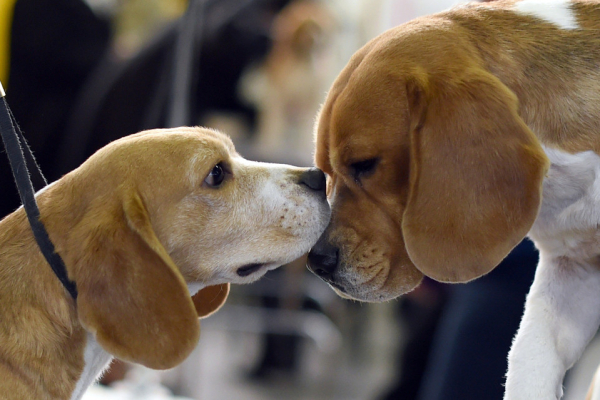 Dr. Stanley Coren does a great job of explaining the study in an article he wrote for in Psychology Today, and I’m going to break it down in a similar fashion:

You’re in a hypothetical room with two hypothetical dogs, first give them hypothetical belly rubs, then, name one dog Thelma, and the other dog Louise. Someone takes Thelma for a quick walk, so it’s just you and Louise. Have Louise sit still and watch you place delectable doggy treats around the room. Afterwards, put a dog-sized screen in front of the treats, obscuring the noms from view. After seeing this and given the go-ahead, Louise is going to go behind each screen gobbling up the goodies. Now lets say you do this a couple of times, but occasionally pull a fast one on Louise by only making it look like you hid a treat behind a screen.

Thelma comes back from her walks and will watch Louise run behind screens all around the room. After this, the two girls finally get to interact with each other.

The pups nuzzle “hellos” to one another per usual. And here is the interesting part, if Louise just came from successfully finding and eating a treat, Thelma is much more likely to go run behind the screen she saw Louise go behind and try her luck. If Louise was duped with the ole fake treat hiding act, Thelma isn’t going to really give a hoot why her buddy came out from behind a couple of screens.

Basically, a greeting between two dogs is not only a friendly hello, it’s also an opportunity to smell each others breath ask one another if they’ve eaten anything lately. As Dr. Stanley Coren puts it, “This confirms what everybody who knows dogs suspects. Dogs are naturally sociable and friendly, but much more so when there is the possibility that some food might be involved.” H/t via The Nest
Featured image via @doginnewyork