Home » Fun » PUPDATE: Dog That Lived 15 Years In A Shelter Finally Gets A Home

PUPDATE: Dog That Lived 15 Years In A Shelter Finally Gets A Home

PUPDATE: A fan of Chip’s rescue story–the pup who lived 15 years in a shelter before finally being adopted–recently posted this heartbreaking message on Facebook:

“What you might not know and something that I did not know until this morning when I was at Save a Pet handing out treats to the reception doggies and saw this little old man in the attached photo come toddling along is that Chip has a brother. A twin brother in fact.

His name is Curly and he was taken to Save a Pet together with Chip 15 years ago when they were only 7 weeks old. Chip is now living out the remainder of his life in the lap of luxury in a wonderful home. His twin brother Curly is still at Save a Pet.” Jaco Rademeyer, who gave Chip a wonder home, surfaced in the comments, and offered to adopt Curly as well to let the two live out the rest of their lives together.

“I am one of an identical twin… This is my duty! I will take Curly to join his brother Chip!”

Curly is now living a joyous life with Chip, Jaco and another family pup, a Bulldog named Louis. Check out the happy family below: 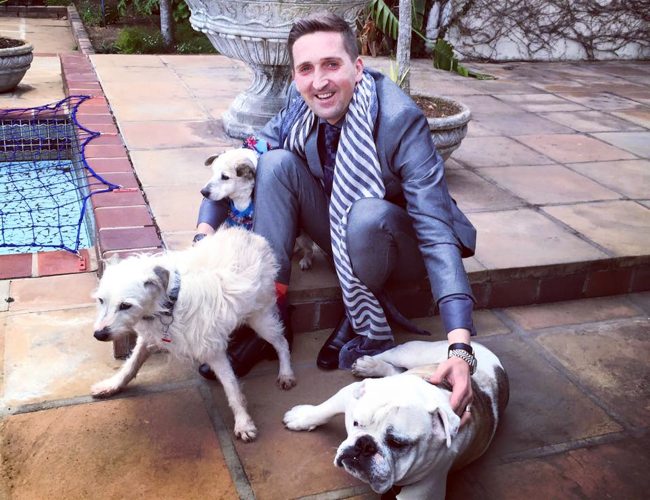 We couldn’t be more happy for these sweet senior dogs who are discovering for the first time what it’s like to be loved.

This salt-and-pepper pup named Chip was just seven weeks old when the Save-A-Pet shelter in South Africa took him in, and for the next 15 years Chip patiently waited for a family and a place to call home. Generally, the older a dog is the harder it is to find them a home, and with both a skin and an eye condition, Chip’s adoption prospects weren’t great. That is, until Chip’s “Furry Dogmother,” Debbie Gillet, stepped in and took his story to Facebook:

“Chip has NEVER had a home, NEVER had a family to love and cherish him, NEVER had someone to play with him or take him for walks, NEVER had a warm bed to sleep in or a human to cuddle up to. His ENTIRE life has been spent in an enclosure at a no-kill shelter here in Port Elizabeth… I am asking for someone out there to step forward and open up their heart and their home for Chip so that he can experience a loving home before he dies.”

Only a few hours later, Debbie’s plea reached a man named Jaco Rademeyer and according to Jaco, it was love at first sight. Now, for the first time in 15 years, Chip has his own bed, his own home, and best of all, his own loving owner–a happily-ever-after tail that every dog deserves.