You may remember Remi from a story we posted in November about a fighting dog who was left to die on a street by his previous owners.

The Pit Bull’s entire body was covered in what Justice Rescue officer Russ Harper told Fox29 was undeniable evidence that the young dog had endured severe abuse typical of the kind endured by fighting dogs. Video posted on Facebook by Dawn Timmeney of Fox29 showed Remi frozen in place on Harper’s lap after he was rescued, likely stunned by the affection he was receiving for possibly the first time in his life. Thanks to the work of loving rescue workers and a dedicated medical team, Remi transformed from a dog at the brink of a painful death to a snuggly cuddle monster ready to attack any willing human with a barrage of sloppy kisses. 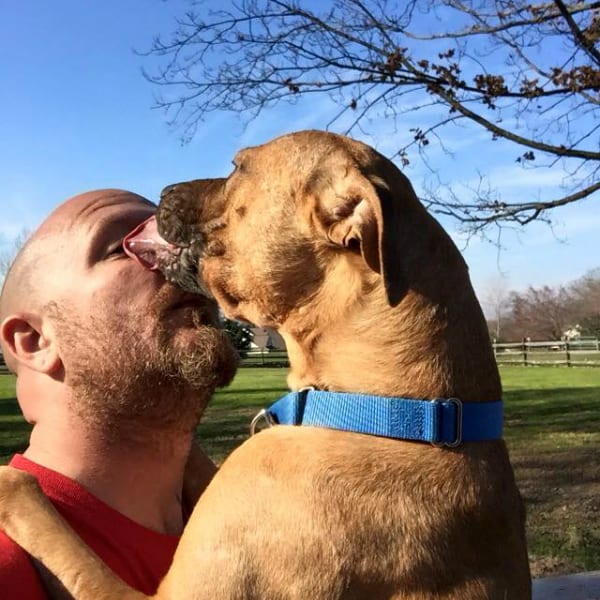 And no one gets more smooches than the man who picked Remi up in his own arms and carried his almost lifeless body out of the nightmare of his former life. Just look at Remi’s reaction to Harper’s arrival after a brief separation:

#Remistrong. Been working in Delaware County Pa a lot because of the number of abuse cases reported. Here I am with Remi after he didn’t see me for a couple days. Love this hero. Come to the reality series premier and see the investigation on Remi’s abuse never seen before on May 14th at Dave and busters in philly, get tickets here https://www.eventbrite.com/e/justice-unchained-premiere-tickets-23190041037?aff=eac2 and support us fighting for animals. Wolf

Remi now has an important role as poster dog for other animals who voicelessly suffer unspeakable horrors at the hands of their abusers. Billboards of his face with the message “The fight ends with you” urge people to take action and report suspected animal abuse, a plea echoed by many especially during April, which is National Prevention of Cruelty to Animals Month. Remi may never realize the power of his story, but he’s living it up now, proving once again that with love, positivity, and a billion kisses, even the deepest wounds can heal.