On January 9, 2016 Officer Ryan Davis of the Canton Police Department witnessed the fatal shooting of his partner and family pet, Jethro. Robbery suspect, Kelontre Barefield is facing up to 57 years in prison if convicted of all charges in the shooting. The heroic German Shepherd passed away from his injuries the following day. The loss of Jethro has been excruciating for Officer Davis, who has said that he would trade places with the dog who saved his life.

As part of his grieving process, Officer Davis has been reading the more than 2,000 letters of condolence he has received since Jethro’s death. He was especially touched by a note from an 11-year-old girl named Allison. It contained the girl’s allowance money and read:

Dear Police Department, I (sic) sorry about Jethro. So here is my allowance for the bullet proof vests. God bless you and the dogs. Sincerely, Allison

In the wake of Jethro’s death the Canton Police Department vowed to fit all 7 of their working K9s with state of the art ballistic vests. A GoFundMe page was created by blogger, Beth Philley to raise money for the costly equipment.  The goal amount for the vests was $10,000; as of March 16, the page has raised over $37,000. Other donors have offered ideas for additional items to purchase with the remaining money, including pet oxygen kits. Although still in mourning for Jethro, Officer Davis had to find a new partner to fill the hole he left. He traveled to the Houston K9 Academy in Texas on January 24 to meet some of the dogs, and potentially bring one back to Canton for training. The trip was a success! Officer Davis returned home on the 26th with new K9 Officer Tuko snuggled in his lap on the plane ride! Tuko began his intensive training on February 1 at the Canton Police Department’s K9 Training School. After 14 weeks he will officially become a member of the force, and Officer Davis’ new partner. Tuko has big paws to fill, but we know that together with Officer Davis, these two will honor Jethro’s memory with their service. 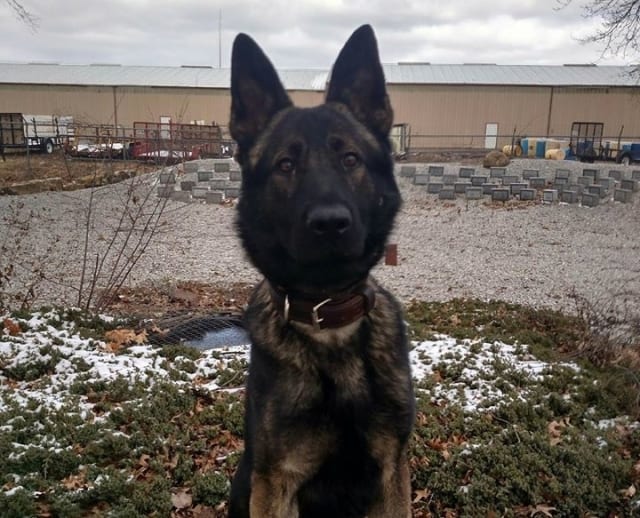 As for Allison, the generosity and empathy she demonstrated at such a young age has surely helped Officer Davis, and the entire Department to heal. It’s children like Allison that give us hope for a brighter, safer future for animals and humans alike.