Humans love dogs so much that we even include them in our language. We make similes and metaphors about them all the time. We’ve been doing so for centuries, and even the oldest sayings still hold up today. If only dogs knew how much fun they are, even when they’re hypothetical. 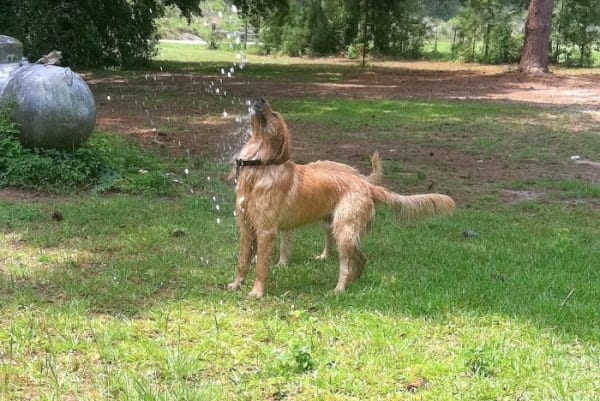 Translation: To be very happy.

“I’m feeling like a dog with two tails whose just seen his owner for the first time in almost 30 minutes.”

Origin: The expression’s first known record is found in a two-part book written by Scottish engineer John Mactaggart. Below is the excerpt, whose context suggests that the expression might mean pride instead. But people use it as a metaphor for happiness, like a dog wagging his tail so fast it looks like he’s got two. Translation: To make the wrong assumption about something/someone.

“I was positive my girlfriend misplaced my files. Turns out I was barking up the wrong tree. My dog had eaten them.”

Origin: Although the word dog isn’t in this expression, it’s still a reference to them. When dogs are used to help in hunting, they’ll chase after an animal that’ll often climb a tree to flee. The dog, assuming its paws don’t have setae like a Gecko, will bark up the tree where the animal is hiding. If the dog is wrong, it’s barking up the wrong tree. Origin: Isaac D’Israeli, a British writer of the 18th century, once said that the ancient spirit of Englishmen was expressed by this proverb. It was first recorded in 1599, when fox, mouse and lizard were used in place of dog.

Source: The Facts on File Dictionary of Proverbs Translation: People will do anything to be successful.

Friend 1:“If you let the air out of Maggie’s tires she won’t make it to the auction where you both hope to bid on that priceless poodle statue!”
Friend 2:“Dog eat dog, my friend.”

Origin: Canis caninam non est is an old Latin proverb that translates to dog will not eat dog. The modern version, seen first in the 1930’s, is a play on the old one, suggesting that society had turned so vicious, that dog is now capable of eating dog. Translation: When a company uses its own product in internal operations.

Employee: “Hey boss, which paper should I use to print these files?”
Boss: “Kelly, this is a paper company. Eat your own dog food.”

Origin: This expression first originated in the 1980’s with Microsoft, and initially referred to software companies using the tools they developed themselves to develop their own software. Since then, it’s spread to other areas in the workforce. Origin: This is basically Southern slang for shadiness. Also common is crooked as a barrel of fish hooks. But we’re here for the dogs. Translation: You shouldn’t do something you hired someone else to do.

“Honey, please stop trying to fix the wall, it’s the contractor’s job. Why keep a dog a bark yourself?”

Origin: The earliest sighting of this expression dates back to 1583, written by Brian Melbancke in Early Modern English: It is smal reason you should kepe a dog, and barke your selfe. Translation: Excusing yourself to go to the bathroom.

Origin: Colloquialisms are usually really tricky to timestamp. This particular one’s earliest publication is in an 1866 play where a character gets out of a difficult situation by saying, “Excuse me Mr. Quail, I can’t stop; I’ve got to see a man about a dog.” *As seen on The Shining.

Origin: Here’s one we’ve all heard. Although today it’s related to alcohol (because why not, America?) hair of the dog once literally meant, hair of the dog. It was a method of treatment for a rabid dog bite, where you’d place hair from the dog that bit you on your wound. Now that the “dog that bit you” is alcohol, it’s really just an excuse to have a drink in the morning. Translation: Associating yourself with the wrong company may taint your reputation.

“Mom, can I go over James’ house? His cat just had kittens!”
“He who lies down with dogs, rises with fleas.”

Origin: More formally known as He that lieth down with dogs shall rise up with fleas. Benjamin Franklin is attributed with this very insightful expression seen in his yearly publication, Poor Richard’s Almanac. “Mom, only two people out of 15 came to my birthday party.”
“If you want a friend in Washington, get a dog.”

Origin: This expression has a very murky past and no definite origin. It’s often attributed to President Harry Truman although there’s no evidence that he ever said it. There have been several variations since 1911, but they’re all synonymously saying: if you want a friend, get a dog. Translation: Out of control, frenzied, or aimless. Unable to take action in the face of many choices.

“I can’t go to Whole Foods. I feel like a blind dog in a meat market. Except instead of being blind, I just don’t have any money.”

Origin: This expression’s oldest account, from 1919, refers to the Attorney General’s Office taking actions that have never been done in America before, aimlessly. Other accounts reference soldiers in service after traumatic experiences. Translation: When you’ve reached a goal and don’t know what to do next.

“This girl finally agreed to go out with me after I asked 7 times. But now I feel like the dog that caught the bus.”

Origin: This is in reference to dogs who chase cars and busses on the road. What would they actually do if they caught one? Probably have zero answers to a lot of questions.