I won't bother to ask if you've ever wondered what goes on in your pup's head. I'm pretty confident every dog lover has wondered what their dog is thinking at one point or another. But what would you do to find out? Since it'll be a long time before science invents the machine that actually lets dogs talk...

...I thought it would be interesting to try a slightly old school method of inquiry. I decided to ask a pet psychic. 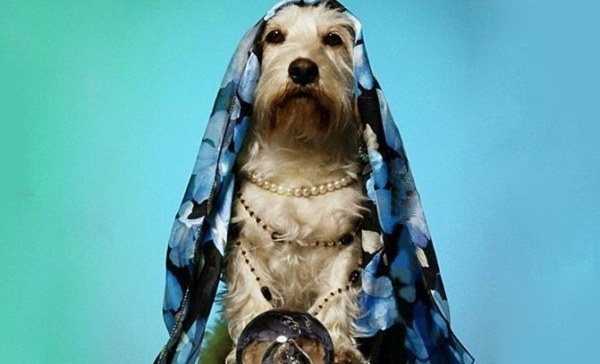 Living in New York City, my dog Ricky and I don't have to walk very far to encounter a store front advertising palm reading or the like, but I was surprised to discover that the pet psychic industry is alive and well. Seth Meyers recently featured a round of pet psychics on his show to interview his darling Frisbee. Now, I use the term "psychic" loosely. In fact, I ended up contacting an individual who doesn't really consider herself someone with psychic ability. She simply believes in her ability to build rapport with animals and read their energy. Christine Agro, an animal communicator, has over 15 years of experience in the holistic fields and has recently begun her own organization, The Church of Nature, to train others to communicate with animals. Her work has been featured on VICE and in The New York Times. Christine appeared at the tail end of Seth's video and only got to talk to Frisbee a little bit, so we thought it would be fun to have her talk to one of the office pups. Ricky has been my muse since joining the pack at BarkPost and my absolute best friend since the day I adopted him four years ago. But being in the pawffice has been a real trial for the little guy. He's taken to disappearing or hiding under things, and doesn't seem to enjoy the company of the other office pups. It's important to note that Ricky's behavior has never posed a threat to his health or the health of others. If I believed that Ricky's mental or physical well-being was at risk, I would contact a licensed behavioralist or veterinarian. When it comes down to it, Ricky was just acting really disgruntled. I said as much to Christine when she visited our office. A few other pups were in the office when she arrived and they immediately ran to her, silently. Most visitors are greeted by loud barks, but they took to her quickly. She began to talk about the other animals in her life and it was evident how much she truly loves animals. Then we began the reading. I'm not sure what I expected. Having grown up on a steady diet of American movies and television, my imagination ran wild before the moment came. Were we going to have to turn the lights out? Was the room going to fill with smoke and green light? Okay, so I wasn't really that worried about it, but the reading was much more grounded than I expected. At no point did Christine tell me anything I didn't already know about Ricky, nor did she say anything ludicrous and wildly inaccurate. If anything, we were two adults having a polite conversation about my favorite subject: me and my pup. She described Ricky as a bit of an explorer. A dog who enjoys finding out about the environment around him. Christine also said Ricky might not get along with the other pups in the office because he just likes to have his own space. The coolest thing she said by far was about Ricky's missing leg---he's a tripawd, btw. Christine said that Ricky doesn't see himself as incomplete. Ricky thinks he has all his legs and is completely whole, she told me. This is something I had always felt about Ricky and it was nice to hear someone reinforce that feeling. At that moment I sort of felt myself giving over to the experience. Though I consider myself a skeptic, I could understand the therapeutic value for those who choose to frequent pet psychics and animal communicators. If you think about it, the role of an animal communicator in the life of a human is not much different than the role of a dog. They provide comfort and companionship. And for those of you who might label pet psychics as crazy, don't you ever feel as if you just know what your dog is thinking, even though you never really will? Is it something I would do again? Nah. Would I recommend Christine to a friend? I might, depending on the friend. If I knew someone with an open mind and a healthy dog who wanted to build their relationship with their pup, then I might suggest it to them. Enjoy the video below and see for yourself. What would you do to find out what your dog's thinking?
Featured image via SF Gate