This past holiday season, a Pit Bull mix named Noelle was turned over to a high volume Canadian shelter by a person claiming he had found her as a stray. Shelter staff suspected he was actually the dog’s owner. Noelle had recently given birth to puppies. Her mammary glands were engorged with milk from nursing her litter, but there was no sign of the pups. Noelle was dirty and showed signs of abuse. She was also dangerously undernourished for a nursing momma and suffering from anxiety and depression – likely from the sudden loss of her babies. The rescue group, K9 Crusaders pulled Noelle from the shelter and began the process of getting this sweet girl healthy.  They wrote about Noelle’s fragile condition via their Facebook page:

She arrived to us the following day and she was skin on bones…weighing in at just over 30lbs, at least 15-20 lbs shy of a healthy weight, and every single rib was easily visible. She had obviously been feeding her babies, but nobody had been feeding her. The K9 Crusaders conducted some online detective work to try to reunite Noelle and her missing pups. They soon found a lead – photos of Noelle in a car, her head held up for the camera by a mystery human. Could this be the person who turned Noelle over to the shelter? Could this photo have been taken on her final ride with her puppies before she was given up? The amateur sleuths located a listing for puppies on an online sales forum. The listing included a photo of 8 beautiful Pit Bull mix puppies in a basket, and another photo of Noelle nursing them. The post claimed that the momma dog had died after giving birth. When the rescuers looked up the person who had posted the ad, they were not surprised that it turned out to be the very same man who abandoned Noelle at the shelter. 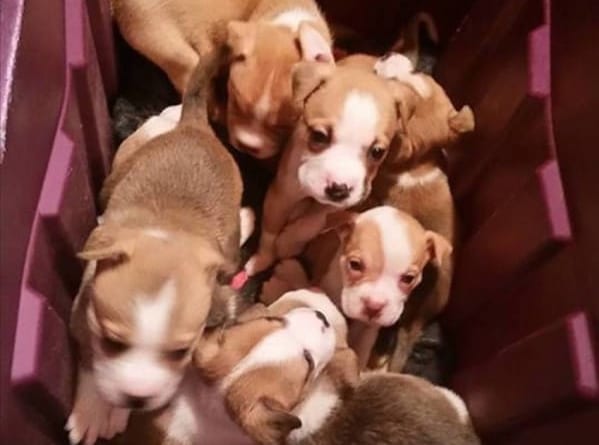 Together, we worked through the night to save them all, by negotiating a mass purchase of the remaining 8 of her 9 puppies that had not yet sold. They were estimated to be barely 5-6 weeks old, far too young to be separated so suddenly from their mother. The owners of course, had no idea who we were, they just saw dollar signs and agreed to let us buy them up all at once with no questions asked

Thanks to the above and beyond actions of one particular volunteer, K9 Crusaders reunited Noelle with her long lost babies just hours later – and just in time for the holidays! View the heartwarming video of Noelle’s first moments of bliss upon seeing her babies again.

Noelle was able to finish nursing her puppies until they were old enough to be safely weaned. All eight pups – named Annabelle, Mia, Oliver, Leia, Jake, Caro, Joey and Holly – have been adopted into loving families. And of course, momma Noelle, too!

H/T to sureawesomeness.com and littlethings.com