Snoop Dogg’s Secret Soft Spot That Everyone Needs to Know

And no, I don’t mean Dr. Dre or Katt Williams. Artist and entrepreneur Calvin Broadus, popularly known as Snoop Dogg, has built his career on the canine theme that runs throughout his musical work and his many business endeavors. But his genuine love of dogs often goes unrecognized. Turns out, Tha Doggfather is a, well...dog father. [caption id="attachment_22645" align="alignnone" width="469"] Images via Junglekey[/caption] He cares for eleven pups of various breeds, sizes, and attitudes--from cuddly to gangsta. So, despite the rapper's ruff exterior, he has a soft spot for a soft Spot, Fido, or Rover. Even his wife and children have dogs of their own. [caption id="attachment_22620" align="alignnone" width="600"] Image via Sumpretty[/caption] Not only does Snoop care for his own pooch crew, he also manufactures dog apparel and playthings through his Doggfather clothing label. The doggy clothing line includes hoodies, faux furs, and jerseys, while the dog toys range from the basic bone to squeaky boomboxes. In the past, Snoop has talked about opening his own chain of pimptastic pet stores he'd call "Snoop Markets." I don't know about you, but I'd be the first in line to hook up my mutt with the latest bark-bling. [caption id="attachment_22640" align="aligncenter" width="475"] Images via Pet Product News[/caption] And Snoop's love of dogs doesn't end with his family or his fashion label. In fact, Snoop's dog love gets downright philanthropic. Along with Chelsea Handler and Michael Buble, Snoop is a major investor in Dog for Dog, a dog food company which donates one bag of food to a shelter for every bag sold. [caption id="attachment_22628" align="alignnone" width="600"] Image via Hollywood Reporter[/caption] Dog for Dog founder Rocky Kanaka relies on the generosity of celebs like Snoop to spread the word. This allows the company to avoid spending money on advertising so the benjamins can be funneled straight to underfunded dog shelters, preventing unnecessary euthanasia. [caption id="attachment_22627" align="alignnone" width="598"] Image via twtrland[/caption] No matter what you think of the man or his music, you can't deny his love for pups. Though he now goes by Snoop Lion, he will always be a dog at heart. [caption id="attachment_22638" align="aligncenter" width="310"] 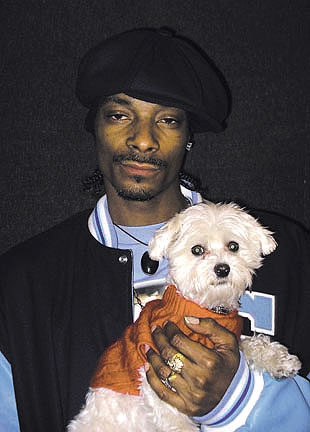 Images via Dogtipper[/caption] Featured image via Famous Wiki and Jenna Marbles Interested in more content like this? Sniff this related article: Here Are 100 “Breeders” Exposed To Be The Worst Puppy Mills In The United States.