The charismatic and selfless Tanya Turgeon, mom to the unforgettable Something Elsie, has welcomed a new canine survivor into her life. Gracie was discovered tied to a fence in Brooklyn covered in dog bites and infected wounds. Her rescuers at Mr. Bones & Co. believe that she was the victim of dogfighting, perhaps used as a bait dog.

Tanya and her beloved pup Elsie had more than 4,000 followers to their Facebook page at the time of Elsie’s passing on March 8 of this year.  Her life and loss touched so many people and helped inspire Tanya to continue Elsie’s legacy of love, laughter, art, and advocacy. She learned about Gracie through the Mr. Bones & Co. Facebook page and saw that she was recovering at Animal Medical Center, the very clinic that had treated Elsie.

I saw them (Mr. Bones & Co.) post a video of Gracie at Animal Medical Center when they first brought her in several weeks ago with all these wounds all over her face and blood dripping off her jowls and yet she was still wagging her tail (which was also bleeding all over), sitting for treats and trying to give people kisses! I saw that video and thought, gosh look at the incredible spirit of that dog despite the pain she must be in.

Elsie’s stroller, which Tanya used to bring her to and from her veterinary appointments, had been left at AMC after Elsie’s passing. It was just too painful for Tanya to push home an empty stroller so soon after her loss. She decided it was time to pick it up, and maybe visit with the remarkable Gracie while she was there. Grace was recovering from a surgical procedure to repair damage to her jaw, but Tanya was able to spend some time with her. Gracie’s ability to give and receive love after all she has been through in her short life really struck a chord with Tanya. She found that even after Gracie was placed in a foster home she couldn’t stop thinking about her. Some of the photos posted to Gracie’s social media accounts while she was in foster care reminded Tanya of sweet Elsie. She had a feeling she would be missing out on something very special if she did not attempt to make Gracie her own.

Tanya was initially intending to rescue another senior dog, likely a Pit Bull, because they are by far the hardest dogs to place in forever homes. There was just something about Gracie that she couldn’t shake. Tanya told me:

I feel like Elsie put Gracie directly in my path and continued to give me signs that it was right over the last few weeks. Although I’m not and probably never will be “over” Elsie I tried my hardest to be open to what was given me and Gracie is a lovely gift. One benefit of Gracie’s young age – vets believe her to be a year to 18 months old – is that Tanya can pursue therapy dog training for her. It remains to be seen if Gracie will show a flair for the arts like her predecessor. Elsie was an accomplished painter and method actor as she demonstrated every Movie Monday on her social media pages. Gracie is her own unique personality, but Tanya definitely intends to carry on Elsie’s mission of improving the way the world thinks about and treats Pit Bulls.

Gracie and I have much to do in terms of changing the perception of Pit Bulls, promoting adoption, and in Gracie’s specific case, ending dogfighting and such horrendous animal cruelty.

Tanya fittingly chose a photo of Elsie in her angel costume as the cover photo for her updated page, Something Elsie Presents the Amazing Gracie. After all, Tanya believes that Elsie is still looking down on everyone she loves including all of the rescuers, vets and fans who helped fill her final years with kindness and warmth. Tanya has created a unique Instagram account for Gracie – @amazingracied – but the original Something Elsie Facebook page will remain the same, just modified to reflect Gracie’s arrival. (The new name is Something Elsie Presents The Amazing Gracie.) Tanya made the decision to keep the same Facebook page as a tribute to the thousands of followers who adored Elsie, and have already embraced Gracie. 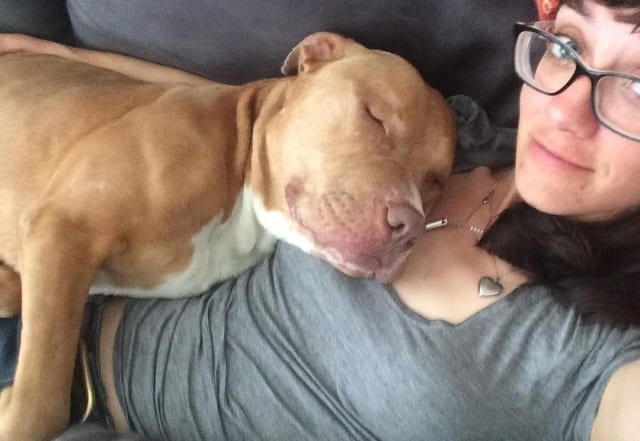 One of Elsie’s veterinarians told Tanya that each dog comes into our lives for a unique purpose. Tanya says Elsie taught her to love with 110% of her heart. I can’t wait to see what the Amazing Gracie has to teach us all!

Featured Image via Something Elsie Presents the Amazing Gracie